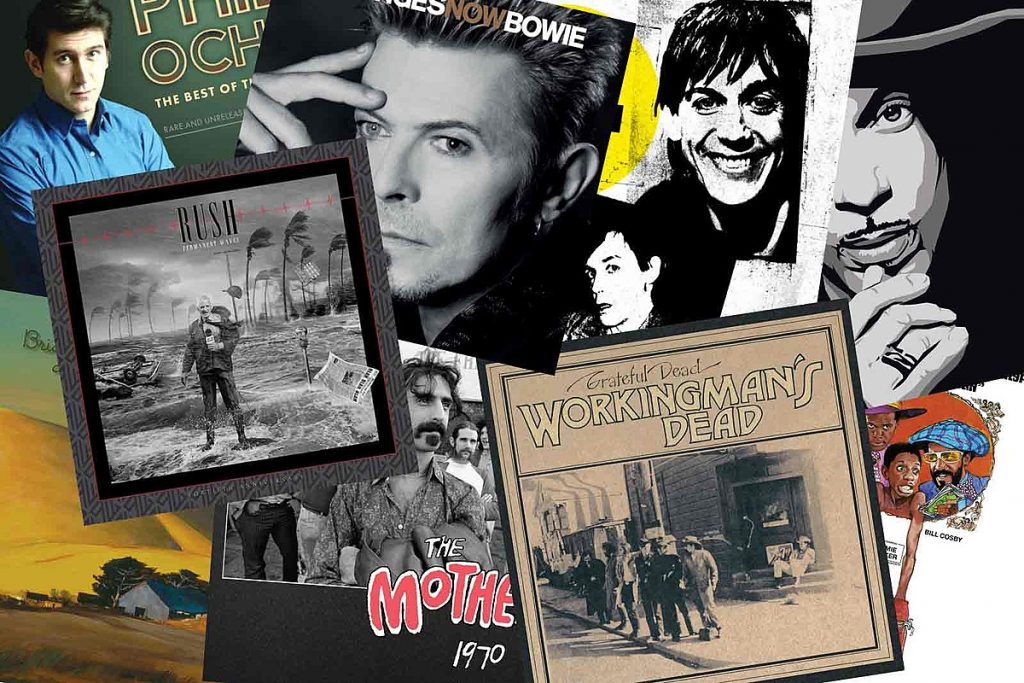 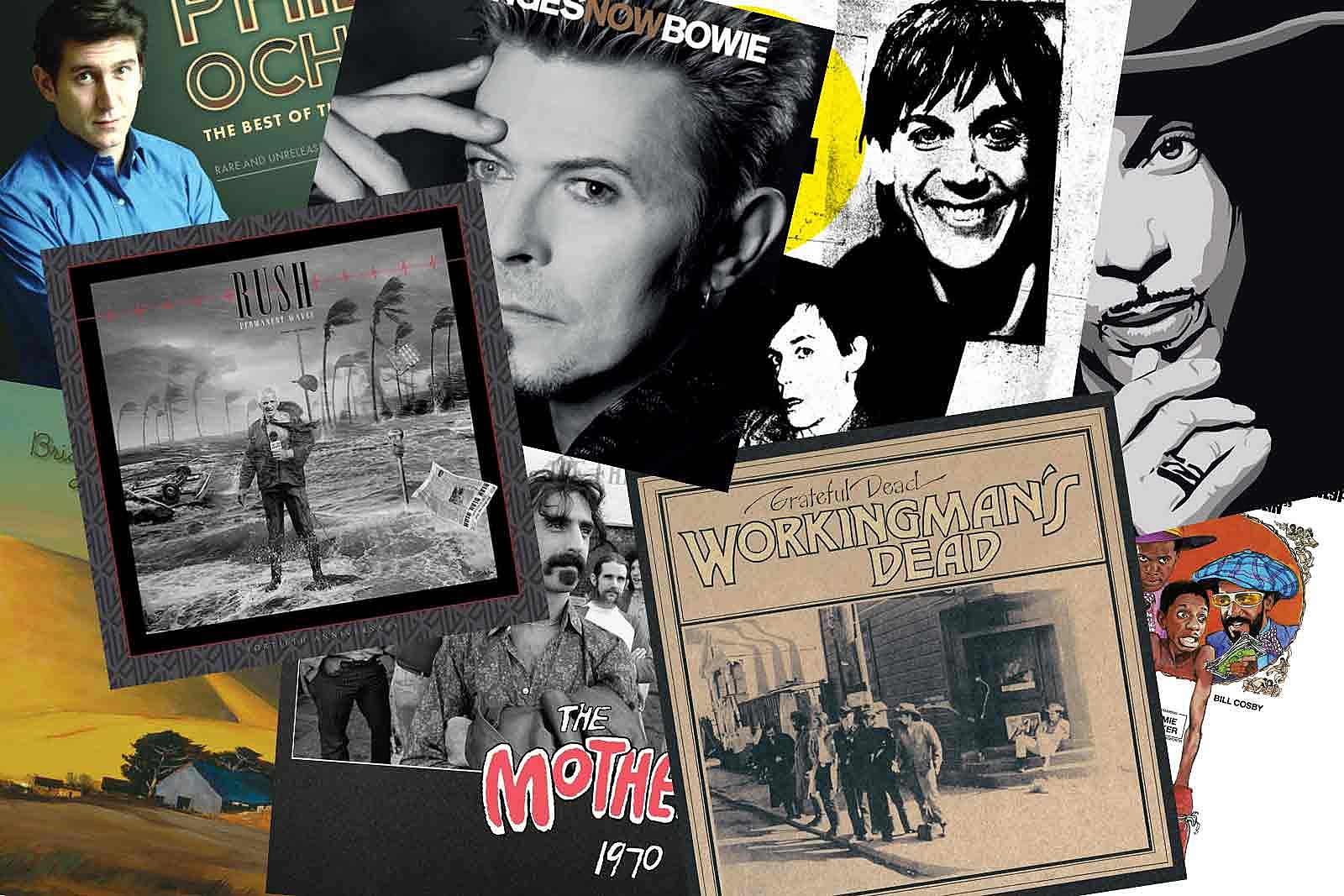 While many new music releases were halted or delayed because of the coronavirus pandemic, most of the archival projects and reissues scheduled for spring 2020 came out as planned.

The season is typically one of the slowest of the year for these types of releases, since the biggest of the box sets, lavish reissues and other archival collections are mostly reserved for holiday scheduling.

But plenty of great new sets saw release over the past three months, including collections by some of music’s biggest names. A new David Bowie record collects run-up performances to his 50th birthday celebration and features several obscure cuts from his first decade that were reworked in 1996.

There are also expanded albums by pop and R&B legends, a glorious new box from a punk pioneer, unreleased tracks from a late singer-songwriter and a new collection of Frank Zappa sessions and live cuts that haven’t been heard in 50 years.

What It Is: In November 1996, Bowie prepped for a 50th-birthday concert by recording some of his older songs in new settings. They were eventually aired on the BBC on his birthday along with messages from famous fans.

What’s on It: The nine songs here span 1970’s The Man Who Sold the World (the title track and “The Supermen”) to 1991’s Tin Machine II (“Shopping for Girls”). In between are obscurities like “Repetition” (originally on 1979’s Lodger).

Best Song You Know: These intriguing performances were stored away until earlier this year, when several surfaced online and on an EP, so you may not know any of them. ChangesNowBowie, a Record Store Day release, collects them all.

Best Song You Don’t Know: Bowie fans know all the songs, but these performances have been unavailable for almost a quarter century. Bowie reclaims “The Man Who Sold the World,” then a recent hit for Nirvana from their Unplugged album.

What It Is: The fourth Grateful Dead studio album is the record that shifted their musical priorities from psychedelic sound experiments to roots-digging country-rock. They never sounded like a more focused band than they did in 1970.

What’s on It: Workingman’s Dead features some of the Dead’s best songs, including “Uncle John’s Band” and “Casey Jones.” The original LP is remastered, and two extra discs collect a 1971 show from Port Chester, N.Y.

Best Song You Know: “Uncle John’s Band,” the album’s opening track, signaled a new Grateful Dead, and it remains one of their most engaging performances – stripped-down, straightforward and the catalyst for one of their best LPs.

Best Song You Don’t Know: The live version of “Casey Jones” from the concert also marked a new era for the Dead. The tour supported both Workingman’s Dead and American Beauty, also from 1970, and rarely was weighted down by needless noodling.

Phil Ochs, The Best of the Rest: Rare and Unreleased Recordings

What It Is: Demos and outtakes from the era leading up to the late singer-songwriter’s final albums for his original label Elektra get back to Ochs’ basics as a folk and protest singer. A companion to 1965’s great I Ain’t Marching Anymore.

What’s on It: These 20 songs were made before 1967’s Pleasures of the Harbor and are more stripped down than anything found on that baroque-pop classic. Some surfaced later on other records, some are brand new to fans.

Best Song You Know: “Love Me, I’m a Liberal” is one of Ochs’ best-known songs, a biting attack on armchair protesters. It was originally on 1966’s Phil Ochs in Concert, which was actually recorded mostly in the studio.

Best Song You Don’t Know: A demo version of “The Confession” first surfaced on a 1997 box set. It gets a second chance here, along with a handful of other tracks that slipped between the cracks over the years.

What It Is: Seven discs celebrating the Stooges frontman’s early solo years, when he holed up with David Bowie in Berlin and made two great albums, The Idiot and Lust for Life, both from 1977.

What’s on It: In addition to remastered versions of those two LPs, The Bowie Years includes five extra discs of demos, rarities and live recordings from the era, including 1978’s TV Eye Live album.

Best Song You Know: The Idiot and Lust for Life include some of Pop’s best solo songs: “Nightclubbing,” “Funtime,” “China Girl,” “The Passenger.” But the best is Lust‘s title track, co-written and produced by Bowie, and a generations-spanning anthem.

Best Song You Don’t Know: An alternate mix of “China Girl” – originally on The Idiot and resurrected as a Top 10 hit for Bowie six years later – sounds more intimate than the one polished for the album.

Prince, Up All Nite: The One Nite Alone Collection

What It Is: Four discs collect 2002’s One Nite Alone … album plus a live LP culled from that year’s tour. The studio set was a truly solo Prince recording, just his voice and a piano in one of his most intimate performances.

What’s on It: One Nite Alone … received a limited debut for fan-club members only; this box marks its first wide release. The three-CD One Nite Alone … Live! includes a mix of older classics and newer songs.

Best Song You Know: The concert features a striking “How Come U Don’t Call Me Anymore” that caps the main set, which is followed by “The Aftershow … It Ain’t Over!” performances of more upbeat jams.

Best Song You Don’t Know: Unless you were one of the lucky fans to get a copy of One Nite Alone … back in 2002, the entire album is probably new to you. A cover of Joni Mitchell‘s “A Case of You” is a highlight, as is the mood-setting title track.

What It Is: The band’s seventh LP finally gave them a Top 10 hit and jolted their career into the stratosphere. It helped that Rush toned down some of their prog ambitions and wrote some of their catchiest songs.

What’s on It: The two discs fatten up the original 1980 album with a new remaster, plus a CD of live cuts from the shows in support of the LP. There’s also a tour program, handwritten lyrics and other memorabilia for fans to drool over.

Best Song You Know: When “The Spirit of Radio” hit airwaves 40 years ago, it sounded little like Hemispheres, the Rush album that preceded Permanent Waves. It remains one of their greatest songs.

Best Song You Don’t Know: A live version of “The Spirit of Radio” proves it worked just as well in concert. The recording from Manchester is meatier and tougher than the studio cut, but it still can’t help sounding like a brave new era for the band.

The Staple Singers, Let’s Do It Again, Pass It On, Family Tree, Unlock Your Mind

What It Is: Four albums released by the legendary R&B family act in the mid-’70s, following their celebrated run at Stax, are reissued with bonus tracks collecting edited single mixes. They’re also remastered.

What’s on It: Curtis Mayfield produced 1975’s Let’s Do It Again and the following year’s Pass It On, infusing the albums with the grace found on his own records of the period. Eugene Record, of the Chi-Lites, and Jerry Wexler produced the next two.

Best Song You Know: “Let’s Do It Again” was a No. 1 pop hit for the Staple Singers and doubled as the theme song for a movie starring Bill Cosby, Sidney Poitier and Jimmie Walker.

Best Song You Don’t Know: The Staples returned to Muscle Shoals for 1978’s Unlock Your Mind, which legendary producer Wexler oversaw. The title track is the highlight of this often-overlooked LP.

What It Is: Brian Wilson and Van Dyke Parks, who worked together on the Beach Boys‘ damaged classic Smile, reunited in 1995 for a new album of similarly sprawling music. It started as a Parks solo project, but he called in his old friend for vocals.

What’s on It: Like Parks’ other albums, Orange Crate Art is a conceptual piece – in this case a tribute to California. In addition to bonus tracks, an extra disc collects unreleased instrumental pieces.

Best Song You Know: Wilson still wasn’t in the best of places when the record was made, but his fragile voice serves the music – especially the title track, a theme-setting opener that sums up Parks’ sunny vision.

Best Song You Don’t Know: A cover of the Louis Armstrong favorite “What a Wonderful World” is one of three bonus songs. The other two are George Gershwin standards: “Rhapsody in Blue” and “Love Is Here to Stay.”

What It Is: Four discs mark the 50th anniversary of the band that helped make Chunga’s Revenge, one of Zappa’s most satisfying works. The lineup features drummer Aynsley Dunbar, pianist George Duke, organist Ian Underwood, and Flo & Eddie.

What’s on It: The 70-plus tracks here include a disc of studio highlights, including previously unreleased songs, and three CDs of live recordings from the summer shows performed by this short-lived group.

Best Song You Know: “Sharleena,” the Chunga’s Revenge album closer, was a live favorite in Zappa’s sets for years. This box includes a Roy Thomas Baker mix of the song not found on the original LP.

Best Song You Don’t Know: “Portuguese Fenders” never made it to a Zappa release, making its first appearance on The Mothers 1970. The guitar-powered instrumental comes from a tape recording made by Zappa on tour that year.