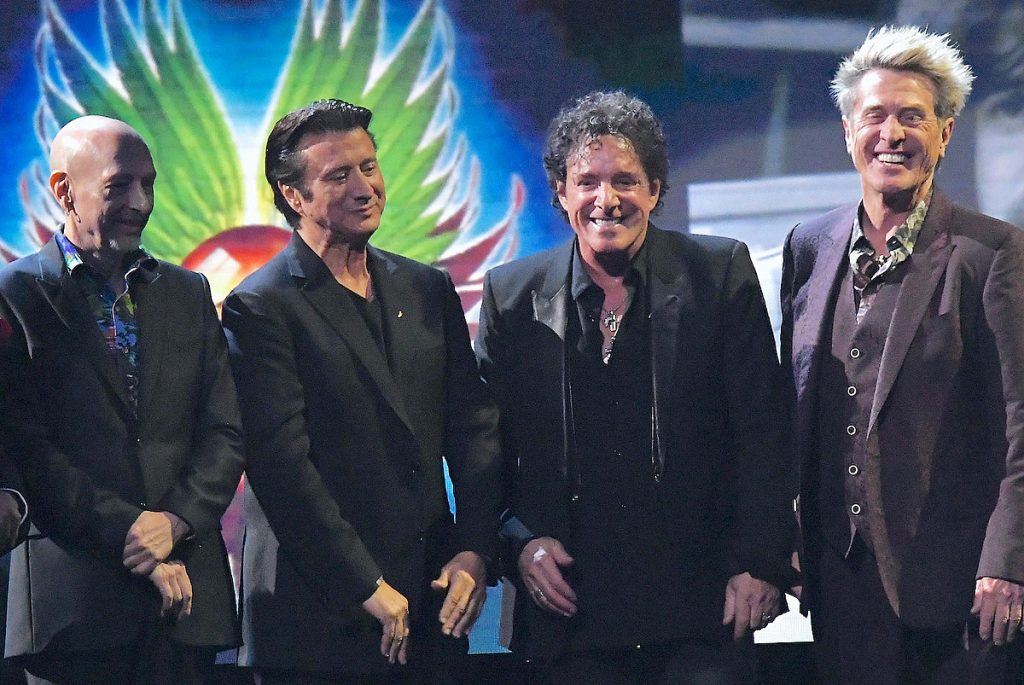 The pair alleged that co-founding bassist Ross Valory and longtime drummer Steve Smith “launched a coup to assume control of one of the band’s corporate entities, Nightmare Productions Inc.” in an attempt “to oust Cain and Schon – the key remaining members of Journey.”

If, in fact, this was an attempt to take over, Valory and Smith didn’t act alone.

The vote to install Smith as president and Valory as secretary of the Nightmare Productions board took place during a meeting held on Feb. 13 in San Rafael, Calif., according to court filings. Steve Perry and the manager who initially assembled Journey, were also there – and both sided with Valory and Smith.

Schon wasn’t at the meeting, but Cain was; he abstained from the votes. The two later decided to fire Smith and Valory and then filed a $10 million lawsuit. The action seeks to overturn the board proceedings and block their former rhythm section from using the Journey name.

“Our clients have lost all confidence in you and are not willing to perform with you,” attorney Louis Miller of Miller Barondess said in a March 3 letter to Smith and Valory. “You have absolutely no rights to the Journey mark and are not authorized to use the Journey mark in any way. Effective immediately, you are no longer members of the band Journey and cannot perform under the name Journey.”

Nightmare Productions originally had a three-member board, with positions filled by Cain, Schon and Valory; Cain was president and Schon was secretary. They contend that Valory and Smith wanted to expand the board to six members, packing it with allies to their cause, while also replacing Cain and Schon. Elsewhere, they say attorney Daniel Schacht sent out falsified notices announcing the meeting on Jan. 31 at the direction of Smith and Valory.

Barondess and Cain attorney Darrell Miller, who also conference-called in, disputed the validity of a Jan. 31 special-meeting notice before votes were even held. The motion to expand the board to six members was then passed by Herbert, Perry, Smith and Valory. Cain abstained.

The same voters affirmed Smith as president and Valory as secretary of the board, with Cain again abstaining. Attorney Tom Jorstad was on hand as an in-person proxy for Smith – and also for Perry. Jorstad was later elected chief financial officer for Nightmare Productions, which was founded by Herbert and still owns the Journey mark.

Cain and Schon claim Valory and Smith wanted to take on these leadership roles so they could rewrite the licensing agreement for the band’s name, giving themselves a cut of future proceeds prior to retiring from the road.

It apparently wouldn’t have worked anyway. Court filings assert that Nightmare Productions doesn’t directly control the Journey mark. Instead, Cain and Schon have furnished original documents showing that they do, following an earlier agreement with Perry.

Nightmare Productions provides an “exclusive, irrevocable license” of the Journey name to a corporate entity formed by Cain, Perry and Schon called Elmo Partners, according to the court filing. Those rights are reserved “until the date upon which none of Stephen Perry, Neal Joseph Schon or Jonathan Cain is actively engaged in a professional career utilizing the name Journey.”

Perry signed a separate document when he split with Journey in the late ’90s, providing Cain and Schon permission to move forward in his absence with certain monetary considerations.

Valory had been the longest-tenured member of Journey after Schon. He appeared on all but one of the band’s albums, dating back to their debut. Smith took over for original Journey drummer Aynsley Dunbar in 1978 and continued with the group until 1985, when he and Valory were fired by Perry. Both returned in 1995, ahead of Journey’s Trial by Fire reunion album. Smith left in 1998, then rejoined Journey in 2016 after solo work with Schon.

Cain, Dunbar, Perry, Schon, Smith and Valory were inducted into the Rock & Roll Hall of Fame in 2017, along with fellow co-founder Gregg Rolie.