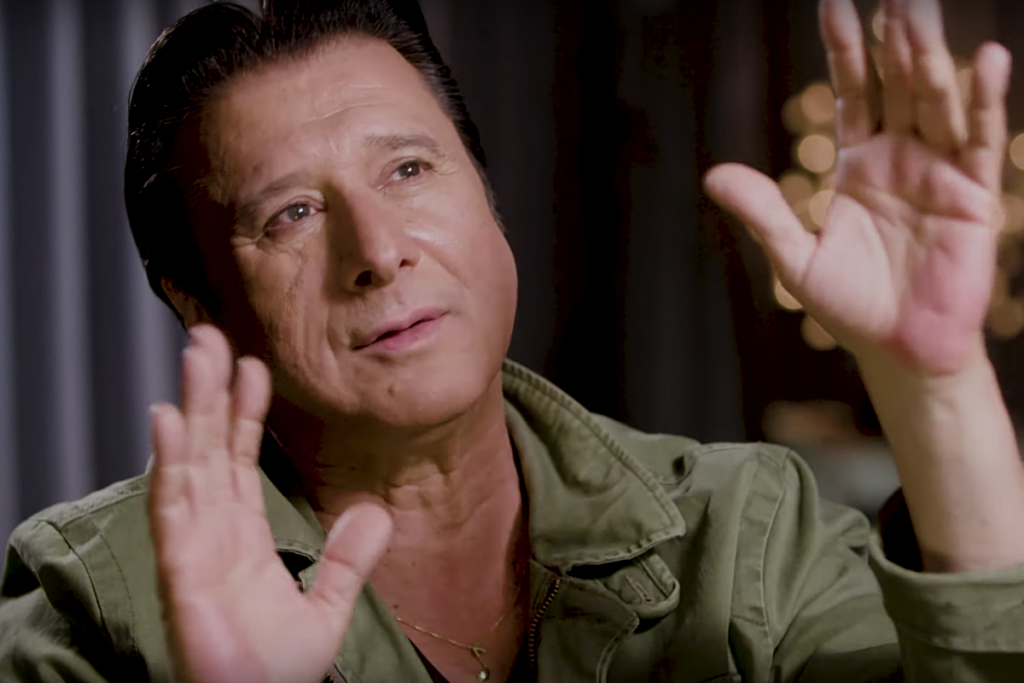 Steve Perry‘s 2018 return was as surprising as it was successful. There’d been rumors, of course, some stretching back years. But as one decade turned into another, the chances of a comeback by Journey‘s former frontman seemed to become more and more remote.

Then, all of a sudden, Perry was everywhere. In August, he released “No Erasin‘,” the advance single from an upcoming studio project to be titled Traces. His return had been confirmed. Traces arrived on Oct. 5, 2018, followed by an intense, often deeply revealing round of media availabilities that put Perry in the very center of the spotlight again.

Perry’s first album in nearly 25 years became his highest-ever charting solo LP, reaching No. 6 on the Billboard 200. “No Erasin'” and “We’re Still Here” soared into the adult-contemporary Top 20.

“I did not plan to be gone so long, but once I stopped, there was something great about just stopping,” Perry admitted in a 2018 talk with disc jockey Scott Shannon. “I went back to my hometown and hung out with friends. I rode my motorcycle on these country roads on the outskirts of Fresno, where I was born and raised, and I’ve gotta tell you — there was something cathartic about just stopping.”

Then he met someone and fell in love with her, only to lose her to cancer. Ironically, Perry confirmed that his career resurgence wouldn’t have happened if he hadn’t endured that shattering moment.

“I thought I had a pretty good heart,” Perry told the New York Times in 2018, “but a heart isn’t really complete until it’s completely broken.”

Perry’s last solo project dated back 1994’s Top 20 hit For the Love of Strange Medicine. He reunited with Journey a couple of years later for the platinum-selling Trial by Fire, which produced “When You Love a Woman,” a Grammy-nominated No. 12 smash. But, in many ways, Perry said he was just going through the motions.

“I had no idea in my heart that my true passion and love for music would ever return,” Perry told the Belfast Telegraph in 2018. “I lost that passion. I was still singing, I was still doing the shows, but there was something that wasn’t connecting. So my answer was, ‘I just need to stop and I don’t know where I’m going or what I’m doing, but I have to just let go.'”

He never toured behind Trial by Fire, citing hip problems. Instead, Perry retreated into increasing isolation. Journey eventually moved on to a different singer, while Perry seemed content to live off royalties as “Don’t Stop Believin'” became a nostalgic touchstone.

“I didn’t sing in those years,” Perry told Rolling Stone in 2018. “I didn’t write music. I must have gained 50 or 60 pounds. I got a butch haircut. I just said, ‘I’m going to just become a plump kid in my hometown again.’ I’d already lived the dream of dreams, and didn’t know how I could come close to being anything like what I was before.”

Then “Don’t Stop Believin'” brought him to Kellie Nash.

Patty Jenkins‘ off-the-cuff request to add “Don’t Stop Believin'” to 2003’s Monster began a wholesale re-evaluation of this Top 10 1981 hit. Then a fledgling writer/director, Jenkins emailed Perry’s attorney on a whim to see if Perry would approve its use in her low-budget film about the life of serial killer Aileen Wuornos. “It was the most beautiful adaptation of the song,” Perry told the Hollywood Reporter in 2018. “And that kind of launched it with sporting events, the Chicago White Sox, The Sopranos …”

Perry also became fast friends with Jenkins. With nothing much to do, Perry took to hanging out in the editing suite to watch her work. And that’s where he first caught a glimpse of Nash, as Jenkins sorted through scenes for a documentary about breast-cancer patients. “I went, ‘Whoa, whoa, whoa, can you spool back to – stop right there. Who’s that?'” Perry told Rolling Stone. “Her smile killed me. I felt like I knew her somehow, and I never met her before.”

Nash, a Los Angeles-based psychologist, was one of those fighting cancer. Perry eventually got up the nerve to call, and they began what became a terribly abbreviated relationship. The cancer had already spread to her lungs and bones; during their time together, it then metastasized into Nash’s brain.

Perry stayed with her until the end, but not before coming to a career-reviving agreement. “One night she says, ‘Honey, I need to ask you a favor,'” Perry told NPR in 2018. “‘If something was to ever happen to me, make me just one promise: That you would not go back into isolation.'”

Nash died on Dec. 14, 2012. Perry says he mourned for two years before finally following through.

He ended up spending some five years completing Traces, not counting an extended break for hip-replacement surgery. It was a purposeful decision. If Perry was going to return, he wanted it to be on his own terms.

“I wasn’t signed to anybody; I had no management,” he told the Guardian in 2018. “I funded the record entirely out of my own pocket. I built my own studio. I had to have the freedom to suck. Nobody was going to put their foot on the back of my neck saying, ‘Is it done yet?'”

When Traces finally arrived, it wasn’t simply a comeback for Perry. He was fulfilling a sacred oath, one he was finally ready to discuss with the wider world. “I told some friends of mine that I actually did something I said I’d never do again,” he admitted to Rolling Stone. “I made that commitment to Kellie, and then a commitment to myself to actually complete it.”

Reappearing after so long away presented its own challenges, beyond his grief. “I’m in touch with the honest emotion, the love of the music I’ve just made – and all the neurosis that used to come with it, too,” Perry told the New York Times. “All the fears and joys, I had to put my arms around all of it. Walking back into it has been an experience, of all of the above.”

He began talking deeply about Nash, about this crushing loss, about how that drove many – but certainly not all – of the songs on his new album. Inevitably, however, interviewers turned to the prospects of a reunion with Journey. He closed the door, sometimes very firmly, each time. Yet the questions persisted, even as Traces made its impressive run up the charts.

Perry admitted that he’d begged the group to reconsider when he heard about their plans to go forward with another singer. “I said to them, ‘Do what you need to do, but don’t call it Journey,'” he told Rolling Stone. “If you fracture the stone, I don’t know how I could come back to it.”

He never did, memorably appearing with Journey on stage to accept their Rock & Roll Hall of Fame induction honors in April 2017 – while declining to perform.

Last fall, he was openly discussing the possibility of solo dates to promote Traces, and which Journey songs might appear on his set lists. But Perry’s most recent concert still dates back to March 1995.

Instead, he released a cover of “Have Yourself a Merry Little Christmas” in December 2018. An official video for “We’re Still Here,” Perry’s first in 25 years, followed in April 2019 – along with a deluxe-edition of Traces featuring five additional songs. A remixed version of “Sun Shines Gray” was issued in July 2019.

Clearly reinvigorated, Perry has said he’s at work on new material, but what comes next remains unclear. He doesn’t seem to be in any hurry to decide.

“Look, I’m not doing this for money,” Perry told CBS in 2018. “I don’t need any money. I eat too much already! I can only drive one car at a time. This is about the passion. But maybe it took a broken heart to get there, a completely broken heart.”