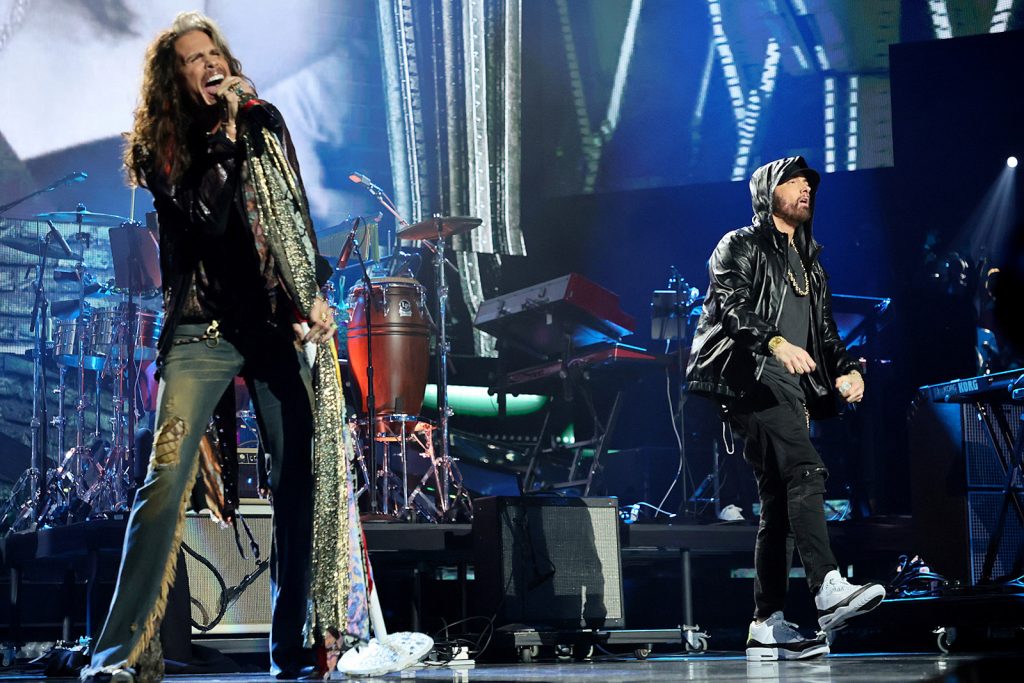 Steven Tyler made a surprise appearance during Eminem’s set at the Rock & Roll Hall of Fame induction ceremony.

Eminem was one of the night’s honorees, earning induction in his first year of eligibility. He was introduced by mentor and longtime collaborator Dr. Dre, before taking the stage for a career-spanning performance.

The set started with a brief snippet of 1999’s “My Name Is,” which first brought Eminem to a national audience. From there, he rolled into “Rap God,” one of the standout tracks from 2013’s The Marshall Mathers LP 2.

The third song was “Sing For the Moment,” the hit tune off of 2002’s The Eminem Show. The track famously used a sample of Tyler from Aerosmith’s 1973 single “Dream On,” while Joe Perry re-recorded his guitar part.

On this night, Tyler strolled on stage to deliver his vocals in person alongside Eminem. Inducted with Aerosmith in 2001, Tyler sounded strong on his parts, belting out his iconic lines during the song’s chorus.

Though he’s known as one of hip-hop’s greatest MCs, Eminem has maintained a soft pot for classic rock over the years. In addition to Aerosmith, he has previously sampled music from Queen, Black Sabbath, the Zombies, Billy Squier and Janis Joplin.

Eminem also duetted with another surprise guest during his Rock Hall set, as pop star Ed Sheeran came on stage for “Stan.” The song was a critical and commercial hit for Eminem at the turn of the millennium. He memorably performed the song alongside Elton John at the 2001 Grammy Awards, where Eminem later took home Best Rap Album honors.