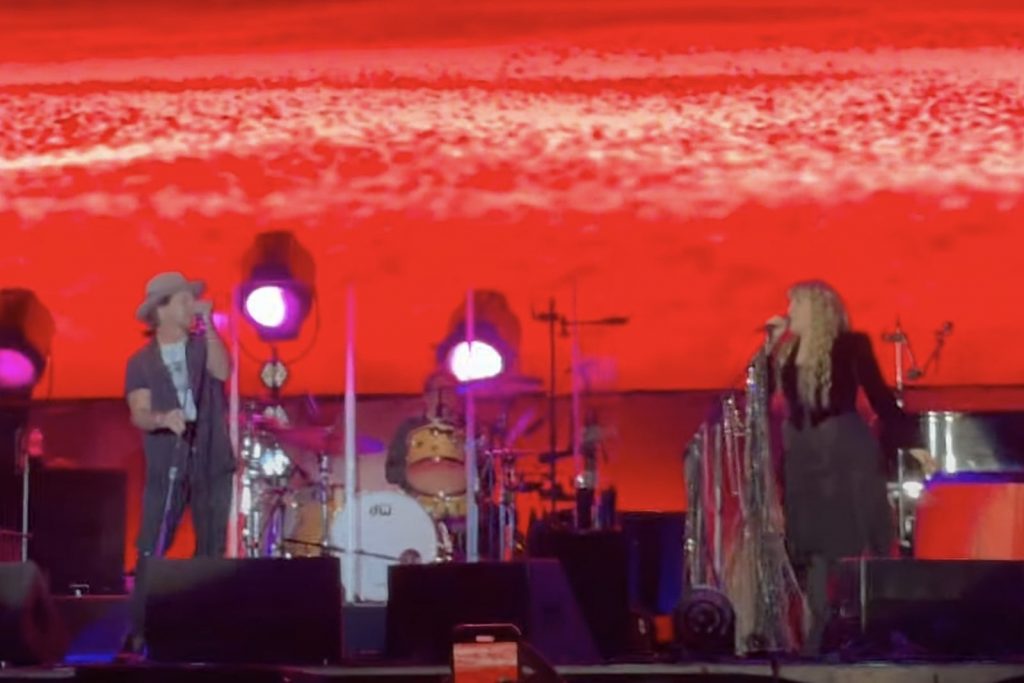 Stevie Nicks and Eddie Vedder joined forces Friday night to perform Nicks’ Tom Petty collaboration “Stop Draggin’ My Heart Around” during her headlining performance at Vedder’s Ohana Festival. You can see video of the performance below.

More than 40 years after its release, the story of “Stop Draggin’ My Heart Around” has been well documented. Producer Jimmy Iovine reportedly didn’t think Nicks’ 1981 solo debut, Bella Donna, had a hit single. Iovine also worked with Tom Petty and the Heartbreakers, so he asked the bandleader to lend Nicks a song for her LP.

The gambit paid off, as “Stop Draggin’ My Heart Around” shot to No. 3 on the Billboard Hot 100 and propelled Bella Donna to multiplatinum status, while also solidifying a lifelong friendship between Nicks and Petty.

Nicks told the audience this story before beginning the song at Ohana Festival. “‘We recorded it, it’s ready to go, he will even sing it with you,'” she recalled a member of Petty’s team (likely Iovine) telling her. “‘So he’s gonna give it to you, and he’s gonna sing it with you.’ And I said, ‘Yes!’ And that song kicked Bella Donna to No. 3 and then to No. 1 on the Billboard charts.”

Vedder strutted onstage during the first verse to waves of applause from the crowd and proceeded to sing Petty’s vocal parts. “That was sneaky Mr. Eddie Vedder!” Nicks said after the performance.

The Pearl Jam frontman is set to perform his own headlining set on the second day of the festival, sharing top billing with Jack White. Pop star Pink will headline on Sunday.

Nicks released a cover of Buffalo Springfield‘s legendary protest song “For What It’s Worth” last week. “I’m so excited to release my new song,” she said in a statement. “It was written by Stephen Stills in 1966. It meant something to me then, and it means something to me now. I always wanted to interpret it through the eyes of a woman – and it seems like today, in the times that we live in, that it has a lot to say.”