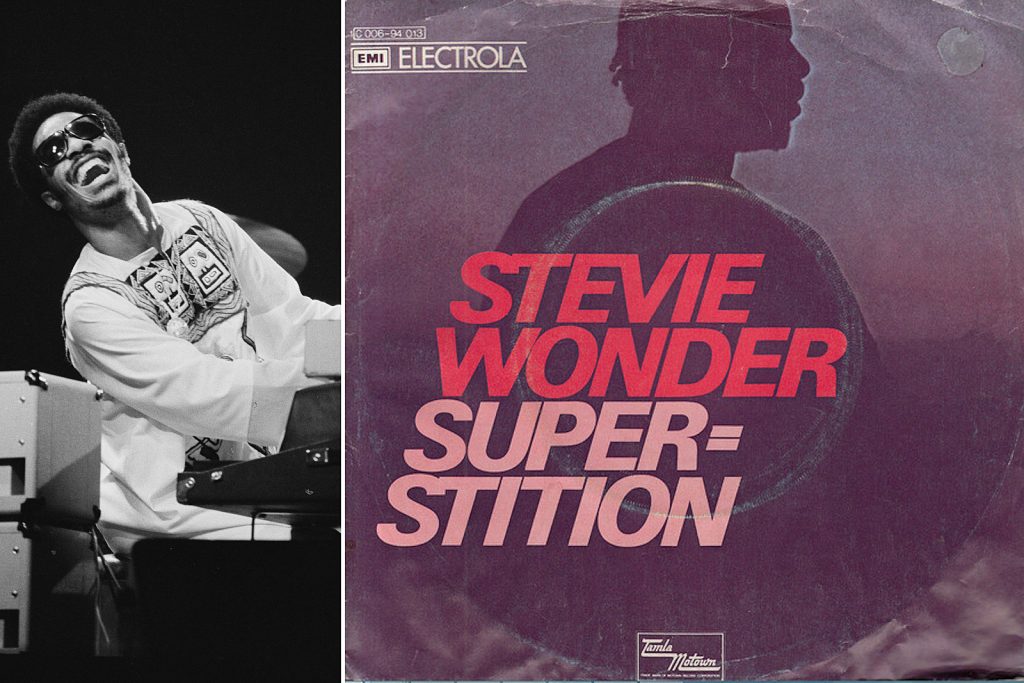 By the early 1970s, R&B music was changing, led by such albums as Marvin Gaye‘s What’s Goin’ On and Sly & the Family Stone‘s musical answer to Gaye’s question, There’s a Riot Goin’ On. Other albums, like Curtis Mayfield‘s Super Fly and Isaac Hayes‘ groundbreaking, Academy Award-winning soundtrack to Shaft, continued to expand the genre’s subject matter beyond dance floors and relationships, discussing social issues relevant to the African American community as well as looking at the world.

Like his contemporaries, Wonder wanted to do more with his music. This desire to stretch his creative boundaries would aid in the singer’s rise from a young R&B prodigy into one of the most highly influential and critically lauded creative juggernauts of his generation.

That transition would start earlier in 1972 with Wonder’s 14th album, Music of My Mind, but it was “Superstition” – released Oct. 24, 1972 – that pushed Wonder to new creative and commercial heights. The song featured Wonder playing all the instruments except the horns. The musician’s funky drum intro and percussive, deep-in-the-pocket comping on the Hohner Clavinet – a five-octave amplified version of the clavichord, a keyboard from the Renaissance era – gave the tune its distinctive sound.

The song’s lyrics are relatively simple, with Wonder warning listeners about falling prey to and allowing superstitions to direct their actions and decisions.

“I think that the reason that I talked about being superstitious is because I really didn’t believe in it,” Wonder told NPR in 2000. “I didn’t believe in the different things that people say about breaking glasses or the number 13 is bad luck and all those various things. And to those, I said, ‘When you believe in things you don’t understand, then you suffer.'”

Wonder also told NPR that the track was formed in his mind while opening for the Rolling Stones.

“I was sitting on the drums, and the first thing that I put down were the drums, and then after that, I put the Clavinet down, and really, I just started singing the melody,” Wonder recalled. At that early stage in the process, the singer had only one lyric that would make it to the final version. “Probably the first thing – the only thing I can remember that I said that I remember keeping was the line ‘Wash your face and hands,'” Wonder admitted. “I think that was from when I was real little; I remember hearing this song saying, ‘Get out of that bed, wash your face and hands.’ [It was the song] ‘Shake, Rattle & Roll.'”

Despite Wonder’s connection to “Superstition,” the song nearly became a hit for another established and creatively restless artist, Jeff Beck, who wanted to add elements of soul and funk to his music.

“There was a time when I was pretty bored with my music, and I think somebody at CBS asked me what I wanted to do,” Beck recalled in the book The Guitar Greats. “I said I loved Stevie’s stuff, so they quietly broke it to him that I was interested in doing something together, and he was really receptive. The original agreement was that he’d write me a song, and in return, I’d play on his album, and that’s where ‘Superstition’ came in.”

The pair of music innovators hit it off, and Beck was present in the studio during some of the sessions that became Talking Book. He even contributed guitar on the track “Lookin’ for Another Pure Love” and played the simple but funky drum groove on the original demo of “Superstition” at Wonder’s insistence.

Due to delays in both artist’s album releases and Motown maven Berry Gordy’s insistence that Wonder record the song, Wonder’s version of “Superstition” hit the radio and record stores first. Beck’s version wouldn’t be released until 1973 on his collaborative album Beck, Bogart & Appice with bassist Tom Bogart and drummer Carmine Appice.

The confusion would cause a strain in the relationship between the two music icons. But Wonder would make it up to Beck a few years later by writing two songs for the guitarist: the funky “Thelonious” and the ballad “Cause We’ve Ended as Lovers,” which became one of Beck’s signature tunes.

In January 1973, “Superstition” reached No. 1 on the Billboard 100, becoming Wonder’s second chart-topping hit (his first, “Fingertips – Part 2” was released in 1963 when the singer was known as “Little” Stevie Wonder). The success of “Superstition” signaled the beginning of what is widely accepted as one of the greatest creative runs of songwriting and album releases in pop music history.

“The whole song was in his head,” Margouleff recalled to The Atlantic in 2012. “Stevie is a genius. He is one of the greatest living songwriters of our generation, no question. He may be the greatest ever. God might have taken his sight, but he put his thumb on his forehead because Stevie is full of music.”

Was there a better run of albums in the ’70s than Stevie Wonder’s string of classics?