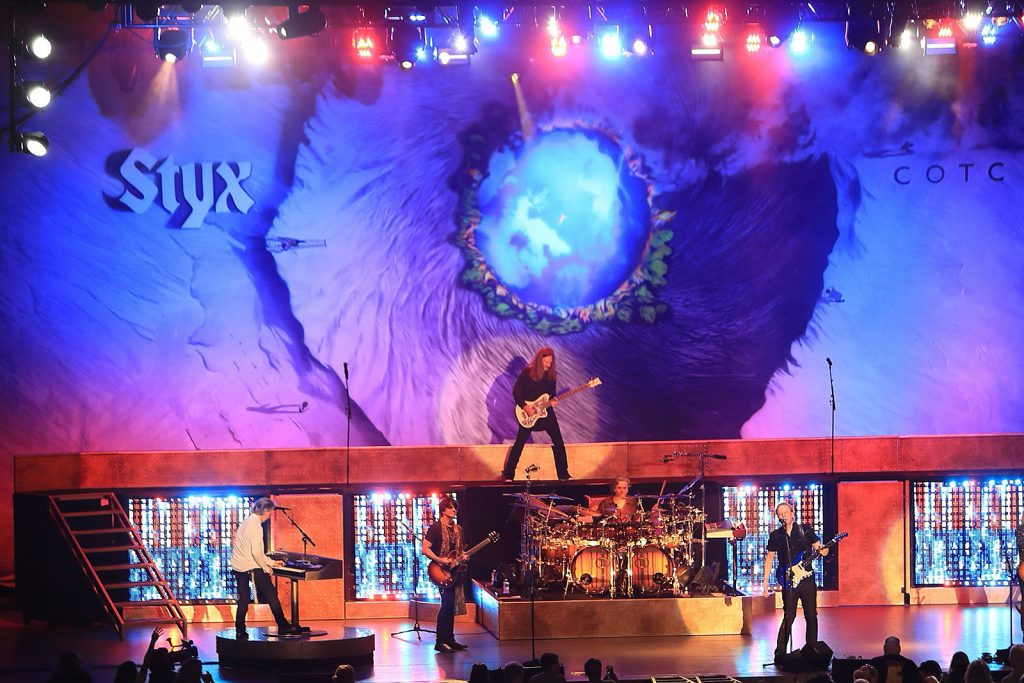 Styx returned to the road last week, playing their first shows since being off the road for more than a year because of COVID-19 shutdowns.

The band took the stage at the St. Augustine Amphitheatre in Florida on June 16 and ended the long musical drought with a performance that was worth the wait for fans who attended.

They played for two and a half hours, spread across two lengthy sets, mixing longtime favorites and deeper cuts with a few select tracks from the just-released Crash of the Crown.

“Having [the album] released, basically, one day after we did our first show, that put a certain extra effervescence in the air, so to speak,” keyboardist and singer Lawrence Gowan tells UCR. “There was a lot of energy with that.”

Gowan says the first show after the break was an emotional experience on more than one level. “Getting back onstage and playing with the other guys, looking eyeball-to-eyeball with them again, that really got me up the spine,” he explains. “There was that feeling of, We’re doing this for us again and isn’t it great that we have a sea of a couple of thousand smiling faces looking back at us?

“I had anticipated it would be the opposite – that it would be the sea of faces that would hit me the hardest, and the band would be secondary to that. But it was more the joy of making music together that really highlighted the moment for me.”

The band was able to rehearse extensively for the concert, booking the St. Augustine venue for five days leading up to the gig. As Gowan notes, the crew spent the first day checking gear, identifying any issues that needed to be fixed; on the second day, “We finally got to make some noise.”

Styx then spent the next two days playing sets without fans. “We just ran the show over and over, including the new stuff, to where it seamlessly worked in,” Gowan says. “By the time we played the show on day five, we were absolutely as ready as we could ever be.”

Watch Styx Perform ‘Fooling Yourself’ in Georgia on June 18, 2021

The members prepped for the tour on their own before that, but, as singer and guitarist Tommy Shaw told UCR last month, “We haven’t all been in the same room to play the music at the same time. We’re dying to get to rehearsals. I can’t wait to just plug in and play these songs all together.”

During the pandemic, the band gave fans the occasional “Styx Fix,” sharing seven concerts from their archives as special livestream events. The final show, which also happened to be one of their last gigs before COVID hit, was recorded at Beverly Hills’ Saban Theatre in January 2020 and presented fan footage from the concert synced to the band’s soundboard audio of the performance. Styx used that same concert to rehearse at home in the weeks before they resumed proper touring last week.

Gowan says that even though he worked to stay in shape during his time off the road, he still needed some warming up. “I couldn’t get to the end of certain notes before I was huffy-puffy,” he laughs. “I’d been riding my bike every day, and I thought, ‘I’m in good shape!’ But there’s nothing quite like singing – there’s a certain kind of muscle control that you need when you have to hold notes of a certain length.

“If you listen to Styx songs particularly, that trademark three-part harmony kicks in on just about every chorus of every song. You have to be able to hold those notes as long as the other two guys that you’re singing with! I got it there, but I had to work on it again.”

Watch Styx Perform ‘The Fight of our Lives’ and ‘The Grand Illusion’ in Florida on June 16, 2021

Music was the “saving grace” for the keyboardist as he weathered the pandemic at home in Canada. He says he performed one livestream each week to “stay connected with people.” He was eventually contacted by corporations, who wanted him to play Zoom shows for their company employees.

“I had a gig that I had to get ready for every single week, even though it was in my basement and in my bare feet,” he laughs. “Everything about the year was bizarre, but … like any bad experience, there are good things. You made discoveries that you never would have otherwise.”

For Gowan, it was playing live, in whatever form that might take, that became key. “I found that playing music to people, even though it was a virtual experience, was still of vital importance to me,” he says. “I can’t imagine my life without it, and that pandemic underscored that even further.”

Still, COVID-19 ended a streak of renewed activity for Styx. “We had never played less than a hundred shows a year,” Gowan notes. “So, by the time the pandemic hit, I’d played well over 2,000 shows with the band. It’s a third of my life that I’ve been with the band. It was never taken for granted. But it definitely was part of our existence on the planet, constantly encountering a sea of faces every few nights in every single year. To have that taken away, it was a shock to the system, like it was for everyone. I mean, no one escaped from those 15 months. No one escaped from that without it having some sort of effect on their lives.

“It was great to not have to open up your laptop in order to communicate with people,” he concludes. “All of a sudden, it’s like, Wow, look at that, there’s actual real bodies there. There’s that visceral experience and that vital exchange that happens between human beings when music is the medium that can’t be replicated in any other fashion.”