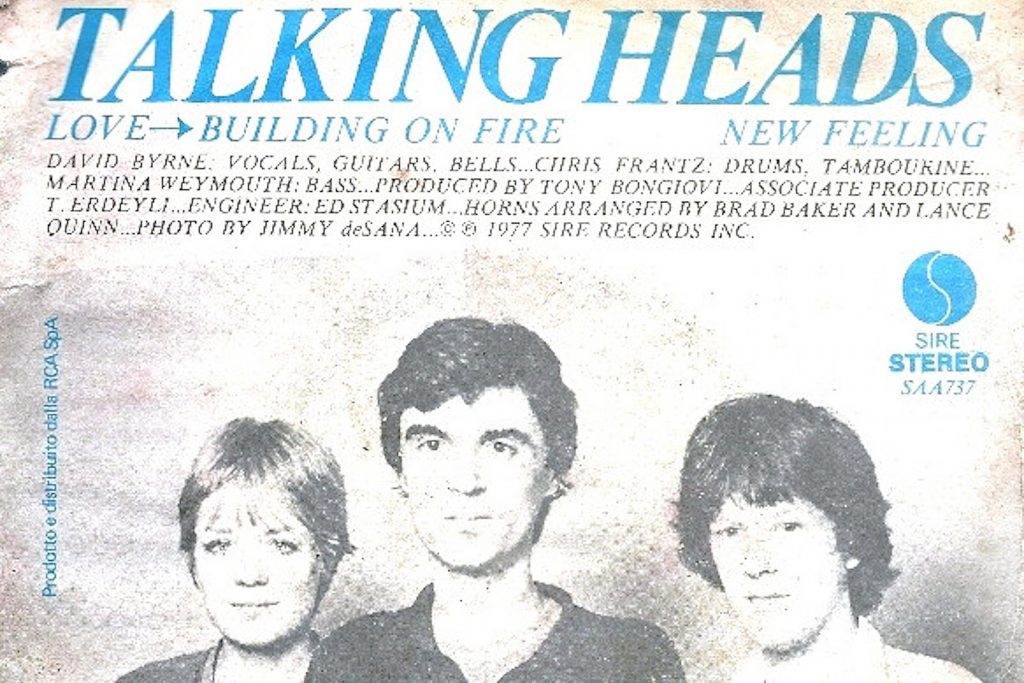 Talking Heads played the cards close to their chest early on, even turning down initial record-label deals.

It wasn’t that they weren’t uninterested in success or distrustful of the industry. Instead, the band was intently focused on honing their sound as part of a burgeoning musical community that frequently shared bills or opened for each other, including Blondie, the Ramones and Television. Crafting their own identity, both musically and personally, was more important.

“We were very conscious that we should have a different demeanor than, say, the New York Dolls,” drummer Chris Frantz told the Guardian in 2020.

Sire Records co-founder Seymour Stein heard Talking Heads – who were then still a trio – open for the Ramones in November 1975. He took a particular liking to “Love → Building on Fire,” a song which read as “Love Goes to Building on Fire” and was composed by singer and frontman David Byrne. Stein offered the band a record deal. Still unsure of their studio ability, Talking Heads declined – though they promised to let Stein know when they felt more confident.

Part of finding that confidence included adding another musician to fill out the band. Frantz connected with Jerry Harrison, formerly of the Modern Lovers, in the summer of 1976. Harrison said he was intrigued, but had enrolled in Harvard architecture school after his last band folded. He said he wouldn’t join until they formally signed a record deal.

Talking Heads reconsidered the offer from Sire, signing on Nov. 1, but were still a three-piece band when they entered Sundragon Recording Studios on West 20th Street to work on “Love Goes to Building on Fire.” Its bouncy acoustic-guitar approach was unusual in a New York scene now years removed from the Greenwich Village folk movement of the ’60s.

“You would always listen to records and you’d hear acoustic guitar and I thought, ‘How come nobody does that in a band?’ I mean, outside of folk acts and stuff,” Byrne told Big Star in August 1977. “So I thought, well, I’ll give it a try. Just have to crank up the volume.”

Listen to Talking Heads’ ‘Love Goes to Building on Fire’

Harrison joined the sessions later in 1977, but only after a European tour to become better acquainted musically. “It was sort of amazing,” he told Big Star in 1978. “Every time we played together, it just got better and better, and just got to the point of ‘Well, alright, it can’t come any further doing this now and then, so let’s try it.’ And it’s been real good.”

Meanwhile, “Love Goes to Building on Fire” was ultimately left off Talking Heads: 77, but it may have helped to entice their audience to stay tuned.

“The crowds are really big now, compared to the early days,” bassist Tina Weymouth told Big Star, a month before the LP’s release. “And where the crowds used to just look at us and say ‘Jeez, they’re so weird’ and think that we were very arty and stuff like dramatic and theatrical, we weren’t trying to be. I think it just happened because we wore very simple clothes and not glitter. We’d just put the lights on and leave them on and not use any colored lights or anything. But now it’s really fun.”

“I set a sort of tentative timetable and thought, ‘Five years before we get good enough so that people get what we do,'” he told Big Star in 1977. “And it seemed to happen a little bit faster, which is very pleasing.”