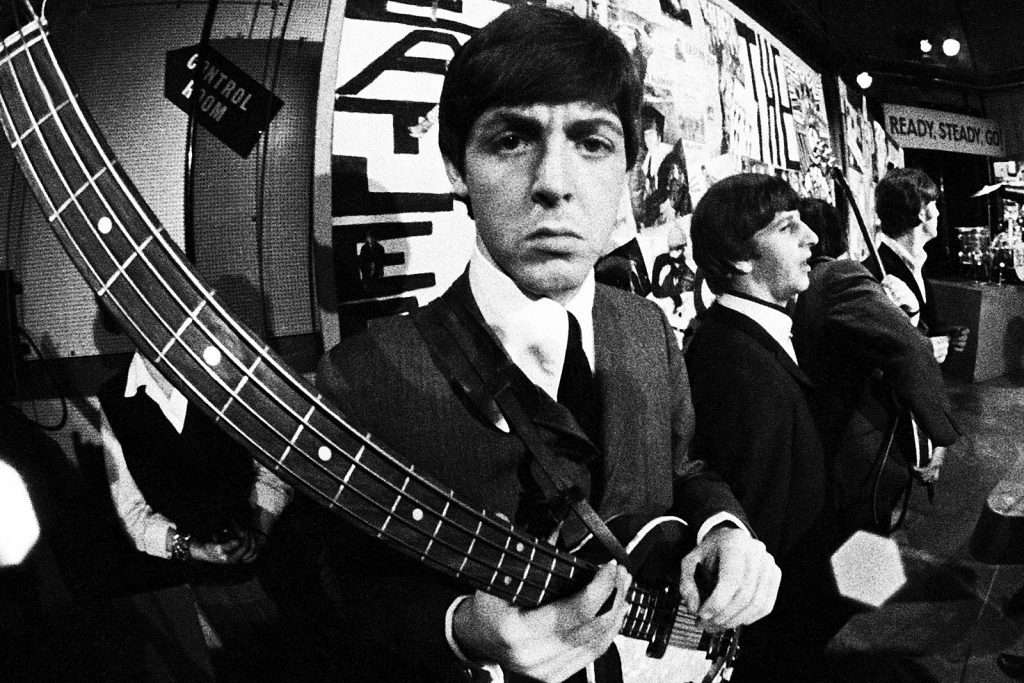 The Beatles never met a genre they didn’t make their own, incorporating everything from raga to chamber pop to vaudeville during their revolutionary career. Still, when most people think of the Fab Four’s vast catalog, “heavy” is probably not the first descriptor that comes to mind — but don’t think for a second that rock’s greatest shapeshifters couldn’t bring the heat.

From their early days as Liverpool’s premier club band to their godlike status in the late ’60s, the Beatles delighted in destroying and rewriting the pop music playbook at their whim. They worshipped at the altars of Little Richard and Chuck Berry as kids and could whip audiences into a frenzy with their breathless rock ‘n’ roll freak-outs. But they quickly tired of the genre’s early limitations and soon began exploring uncharted sonic territory, drawing inspiration from the unlikeliest of sources and finding radical new ways to use the technology at their disposal. Everything they touched turned to gold; their innocent discoveries became the new state of the art.

These groundbreaking achievements resulted in songs that were heavy in both the conventional, distorted-guitars-and-loud-drums sense as well as a more cerebral sense. Songs that make you want to kick through a wall, and songs that force you to sit down and cradle your head in your hands as you try to make sense of what you’re hearing. Both sides are on display in our below list of the 10 Heaviest Beatles Songs.

The Beatles, especially Paul McCartney, get back to basics on this bluesy rocker, which they wrote on the spot and banged out in the studio in a single day. Spontaneity and childlike glee pervade “Birthday,” from its explosive opening drum fill to its crackling riffs to its peppy handclaps and backing vocals, courtesy of Pattie Harrison and Yoko Ono. McCartney channels his early rock ‘n’ roll heroes Little Richard and Eddie Cochran on his scorching lead vocal, elevating an otherwise solid-but-unspectacular song into one of the Beatles’ heaviest and most exciting rockers.

McCartney has always worn his Little Richard influence on his sleeve, nowhere more loudly or proudly than “I’m Down,” originally released as a B-side to the “Help!” single. “I could do Little Richard’s voice, which is a wild, hoarse, screaming thing; it’s like an out-of-body experience,” McCartney said in Barry Miles’ book Many Years From Now. “You have to leave your current sensibilities and go about a foot above your head to sing it. You have to actually go outside yourself. It’s a funny little trick and when you find it, it’s very interesting.” The frenzied rocker made for a perfect live song, and during their encore performance of it at Shea Stadium, John Lennon ratcheted up the intensity (and absurdity) by pounding his Vox Continental organ — occasionally with his elbow — in his best Jerry Lee Lewis impression.

Unfathomable though it may seem today, the music press deemed “Ticket to Ride” a radical and downright uncommercial sonic departure upon its release in April 1965. While the song’s chart-topping success swiftly disproved the latter, the former remains indisputable. The first Beatles song to exceed three minutes, “Ticket to Ride”‘s shimmering guitar arpeggios, downbeat lyrics and lurching drum beat were unlike anything in the band’s oeuvre or contemporary pop music, leading Lennon to call it “one of the earliest heavy-metal records made” in a 1980 Playboy interview. “Ticket to Ride” is a crucial inflection point in the Beatles’ career, foreshadowing their imminent psychedelic period.

“Paperback Writer” is both a masterclass in economic storytelling and a remarkable studio achievement. A direct descendent of “Day Tripper,” it sports a fuzzy, distorted lead guitar riff and was born out of McCartney’s attempt to write a tune based on a single chord. McCartney gives the track some extra muscle by swapping his usual Hofner bass for a Rickenbacker and using a speaker as a microphone, much to the chagrin of the EMI engineers who had to adhere to strict rules about the equipment used in the studio. As always with the Beatles, the ends justify the means.

If LSD had a marketing campaign, “Tomorrow Never Knows” would be its jingle. Lennon lifts directly from Timothy Leary, Ralph Metzner and Richard Alpert’s The Psychedelic Experience in his exhortations to “turn off your mind, relax and float downstream” and “surrender to the void,” almost singlehandedly thrusting the psychedelic drug subculture into the mainstream. Sonically, the song is nothing short of revelatory, with its thundering, detuned drums (notably similar to “Ticket to Ride”), fluttering tape loops, McCartney’s reversed guitar solo and Lennon’s reverberant, otherworldly vocals, which were achieved by running his voice through a torn-apart Leslie speaker. Musically, lyrically, technologically, culturally — the best way to describe “Tomorrow Never Knows” is heavy.

For any other band, “Hey Bulldog” would be a career-defining masterpiece; for the Beatles, it was a time-filler. The band wrote and recorded the barnstorming rocker on the fly while filming a promotional video for “Lady Madonna,” and its jaunty guitar and piano riffs recall the bluesy chart-topper as well as early R&B numbers like “Money (That’s What I Want).” McCartney and Lennon’s ad-libbed barks and shouts elevate the song’s ramshackle energy, and the ice-pick guitar solo is one of the most aggressive in the band’s catalog.

There’s nothing heavier than heartache, as Lennon proves on this scalding blues shuffle, which he likely wrote about Ono while he was in Rishikesh, India, “trying to reach God and feeling suicidal.” With its pitch-black lyrics (“Black cloud crossed my mind / Blue mist round my soul / Feel so suicidal / Even hate my rock and roll“), ragged vocals and sawtooth guitars, “Yer Blues” lampoons the late-’60s British blues boom popularized by the likes of Fleetwood Mac and John Mayall‘s Bluesbreakers while also one-upping them. Recorded live to tape in a small room next to Abbey Road’s Studio 2, the song shows the Beatles at their most gloriously raw, with Lennon shouting the third verse into a dead microphone and featuring a hard splice of two takes at the 3:17 mark. The unadorned ferocity of “Yer Blues” also presages the feral anguish of Lennon’s solo tracks like “Cold Turkey” and “I Found Out.”

Lennon once again plumbs the depths of his obsession with Ono on the darkly psychedelic, proto-doom dirge “I Want You (She’s So Heavy).” Anchored by a descending chord progression and a single lyrical phrase repeated ad infinitum, the song derives its primal intensity from its blistering repetition. (Don’t mistake this repetition for simplicity: “I Want You” is a composite of three takes culled from 35 recorded in a single day, with mountains of overdubbed guitars stacked atop McCartney’s nimble, chaotic bass lines.) “‘She’s So Heavy’ was about Yoko,” Lennon told Rolling Stone in 1970, responding to criticism of the song’s lyrics. “When you’re drowning, you don’t say, ‘I would be incredibly pleased if someone would have the foresight to notice me drowning and come and help me.’ You just scream.”

After years of being instructed by manager Brian Epstein to bite their tongue about the Vietnam War, the Beatles finally clarified their stance on “Revolution.” Those years of pent-up aggression are palpable on the electric version of the song, released as the B-side to “Hey Jude” shortly before its bluesy, acoustic incarnation appeared on the White Album. Lennon’s calls for nonviolent revolution (which were ironically criticized by the members of the radical New Left who had previously embraced the band) are practically negligible; “Revolution” connects on a primal level because of its hyper-distorted, dueling guitars and Lennon’s unhinged screams. While the lyrics to “Revolution” continue to inspire debate, its blistering musical catharsis is inarguable.

Really, what could be left to say about “Helter Skelter”? The volcanic riffs. The larynx-shredding screams. The grisly Charles Manson association. The blisters on the fingers! All due respect to “Ticket to Ride” and Lennon’s estimation of it, “Helter Skelter” is heavy metal’s ground zero, surely the most bone-crunching song released by a popular rock band up to that point, predating Led Zeppelin‘s self-titled debut by almost two months and Black Sabbath‘s by more than a year. It’s been covered by everyone from Motley Crue to U2 to Pat Benatar, none of whom have matched the sheer, unadulterated brutality of the original. Even McCartney, the ever-humble Beatle, looked back fondly on “Helter Skelter” with typical Liverpudlian modesty in The Beatles Anthology: “That was really all I wanted to do – to make a very loud, raunchy rock ‘n’ roll record with the Beatles. And I think it’s a pretty good one.”

From the cheery ‘Please Please Me’ to the kinda dreary ‘Let It Be,’ we rank all of the group’s studio LPs.