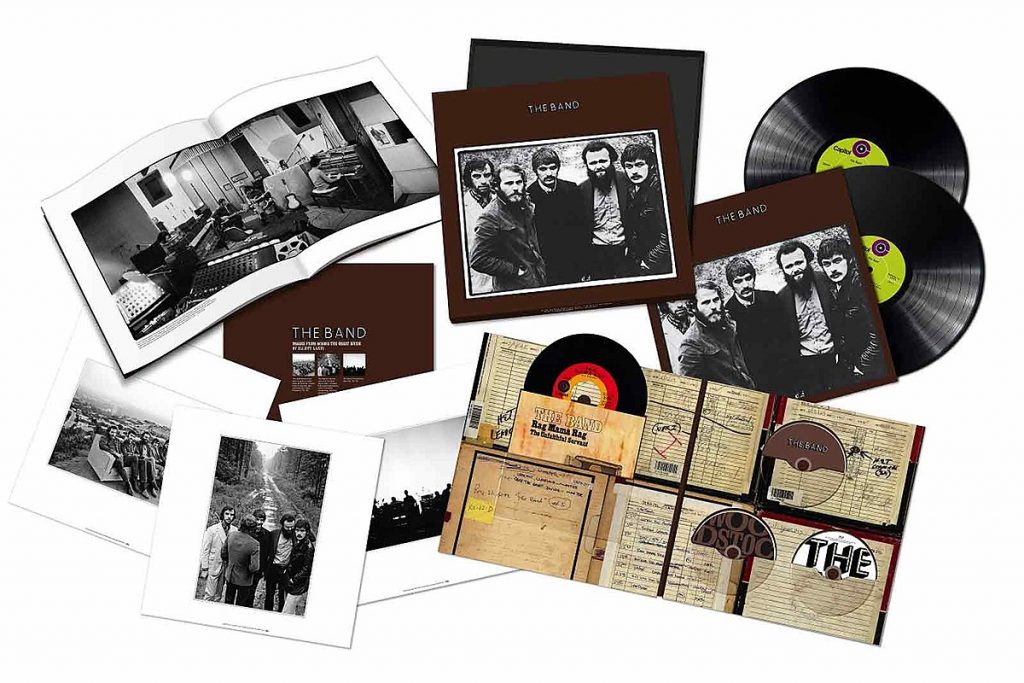 It didn’t take long for Bob Dylan‘s backing group to claim their own identity. With 1968’s Music From Big Pink, the Band not only anticipated a move toward more stripped-down and roots-oriented songs – something they picked up from their former boss – they also helped ease the transition from one decade into another, as the Summer of Love gave way to other, more musically adventurous directions.

Its influence can still be heard 50 years later–- from the front-porch swing of “Rag Mama Rag” to the album’s centerpiece, “The Night They Drove Old Dixie Down,” a Civil War primer viewed from the losing side. The Band‘s appeal was etched with a timelessness that sounded little like the Woodstock and Altamont generations it got caught in the middle of when the album came out.

That appeal remains a strong draw half a century later on The Band (50th Anniversary Edition), which gathers the remixed album, outtakes, surround mixes and the group’s never-released set from the Woodstock festival on a series of CDs, Blu-rays and vinyl.

The alternate takes, early versions and instrumental mixes won’t change your mind about what made it to the original album. It was perfectly assembled in 1969 by the Band and producer John Simon in Sammy Davis, Jr.’s Los Angeles pool house. Instead, the bonus tracks – about half previously unheard; others have appeared on reissues over the years – serve to remind you just how accomplished, and important, each member was in his various roles. (Listen to the way Hudson’s wah-wah-powered clavinet drives “Up on Cripple Creek” like a dusty jaw-harp, while Manuel’s piano subtly echoes in the background.)

The key new addition here is the Band’s full Woodstock performance, which consisted mostly of Big Pink songs along with some covers, including an electric take on the Four Tops’ “Loving You Is Sweeter Than Ever.” The classic 1972 live album Rock of Ages chronicles how great they were as a live act, and by that time, they pretty much had everything nailed down. There are some creaks here and there in the Woodstock set, but this human element opens up the music even more. Along with Creedence Clearwater Revival‘s previously unreleased show from the fest, which also finally saw release in 2019, the Band’s 11-song show colors Woodstock history in some brilliant new tones.

But it all comes back to that original album, stunning in its ability to uncover depth and character in the seemingly simple design of its packaging and appearance. The Brown Album positions itself as a snapshot of a time gone by, but it’s really more forward-looking than that. Robertson’s expert songs mined the past for inspiration, and musically many of them could be played on instruments that were around a century earlier, yet they were forging a new path. Appropriately, the 50th-anniversary edition is more revisit than revelation, but that takes nothing away from this landmark and still-essential album.