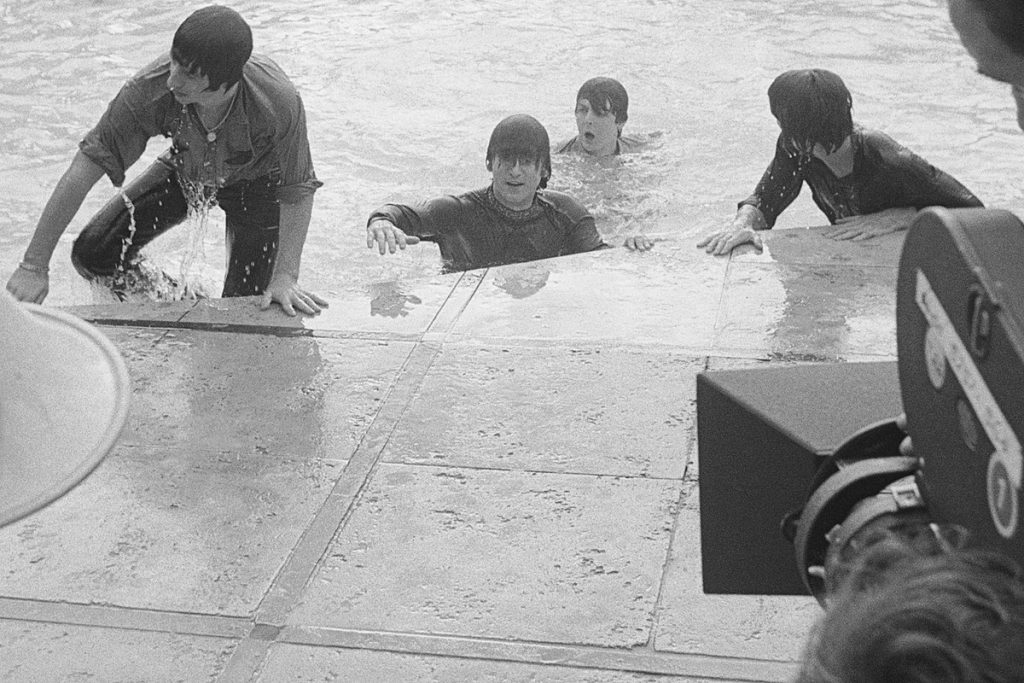 On Feb. 23, 1965, John Lennon, Paul McCartney, George Harrison and Ringo Starr began filming the second Beatles movie. Originally named Eight Arms to Hold You — an innocent but prophetic phrase that was definitely better than the working title Beatles 2 — the title was eventually changed to Help! And that’s exactly what the band needed around that time.

The four knew their fabness was waning. Beatlemania was taking its toll, making it impossible for them to escape the bubble of fame that surrounded them, leaving the quartet detached from the kind of everyday world that inspired the songs that helped blow up that bubble in the first place.

Lennon knew what he was doing when he wrote the title track. “I meant it, it’s real,” he said later. “It was just me singing ‘help’ and I meant it.” Separately, he told Playboy in 1980 that, at the time, he “was fat and depressed, and I was crying out for help.”

McCartney more recently concurred: “He didn’t say, ‘I’m now fat and I’m feeling miserable.’ He said, ‘When I was younger, so much younger than today.’ In other words, he blustered his way through. We all felt the same way.” Still, “Help!” remained one of a handful of Beatles songs Lennon didn’t criticize, though he noted, “I don’t like the recording that much; the song I like. We did it too fast to try and be commercial.”

A Beatles movie was always going to have to be commercial, of course. Director Richard Lester was back in the saddle, after the success of 1964’s A Hard Day’s Night, with an increased budget that meant he could shoot in color this time. He had a very keen sense of what he wanted Help! to achieve – only he didn’t necessarily share his vision with the movie’s stars.

“The film was out of our control,” Lennon said in the ‘60s. “With A Hard Day’s Night, we had a lot of input and it was semi-realistic. But with Help!, Dick Lester didn’t tell us what it was all about.”

Watch the Beatles Shoot ‘Help!’ in the Bahamas

It was all about spoofing the spy thriller movies that were all the rage at the time, along with a healthy doze of British post-war class humor, inspired by Spike Milligan and his Goon Show (which co-starred Peter Sellers and was a major influence on the Monty Python team). They found an irreverent, nonsensical way of sending up the upper class, which seemed to have a habit of marching into wars and letting the working class die before establishing what, if anything, was supposed to be achieved with all the bloodshed. And there was nothing to about the situation except laugh.

The Beatles themselves shared that sense of humor, and both Lester and music producer George Martin had connections with the Goons.

So, it should have been a match made in heaven; Lennon later accepted it may well have been. “I realize, looking back, how advanced it was,” he told author David Sheff during the late Beatle’s last large-scale interview. “It was a precursor to the Batman ‘Pow! Wow!’ on TV – that kind of stuff. But [Lester] never explained it to us. Partly, maybe, because we hadn’t spent a lot of time together between A Hard Day’s Night and Help!, and partly because we were smoking marijuana for breakfast during that period. Nobody could communicate with us; it was all glazed eyes and giggling all the time, in our own world. It’s like doing nothing most of the time, but still having to rise at 7AM, so we became bored.”

Indeed, the band later described the film shoot as having been done through a “haze of marijuana.” “We showed up a bit stoned, smiled a lot and hoped we’d get through it,” McCartney admitted in the Beatles Anthology interviews. “It’s okay to get the giggles anywhere else but in films, because the technicians get pissed off with you. They think, ‘They’re not very professional.’ Then you start thinking, ‘This isn’t very professional – but we’re having a great laugh.’”

Starr agreed that “a hell of a lot of pot was being smoked while we were making the film. It was great. That helped make it a lot of fun.” He recalled one scene where he and McCartney had to run away from a curling stone with a bomb in it. “Paul and I ran about seven miles, we ran and ran, just so we could stop and have a joint before we came back,” he noted. “If you look at pictures of us, you can see a lot of red-eyed shots. They were red from the dope we were smoking.”

Filming began with scenes in which the Beatles pretend they’re going to the Bahamas in order to shake off media and fans, not realizing they’re already the target of an Indian death cult that wants to recover a sacred ring sent to Starr by a fan.

But the drummer really did want to go to the Bahamas, so that’s what they did. It’s said that band manager Brian Epstein chose the islands to make use of the local tax laws: By spending even a short amount of time there, he and the group were able to claim residential status and avoid steeper British bills. Unfortunately, the summer scenes they needed were at odds with the cold Bahamian winter, which left the actors shivering through their performances.

Watch the Beatles Fly to the Bahamas in ‘Help!’

Shooting was supposed to wrap on April 14, 1965, by which time great British-based actors of the era — including Leo McKern, Roy Kinnear, Patrick Cargill and Victor Spinetti — added their talents to a surreal, self-referential piece of silliness that many critics hated at the time.

But Lester is now credited with employing creative approaches to framing, filtering and pacing that later became standard in music videos and similarly lighthearted band movies, as well as The Monkees TV show.

The abandoned title Eight Arms to Hold You – originally an allusion to the Fab Four’s limbs – would prove prophetic because it also could refer to the Eastern deity statue seen in the film’s opening scene. During the making of Help!, Harrison encountered Indian music and instruments for the first time, leading in part to the exciting new direction the Beatles were so desperately looking for.