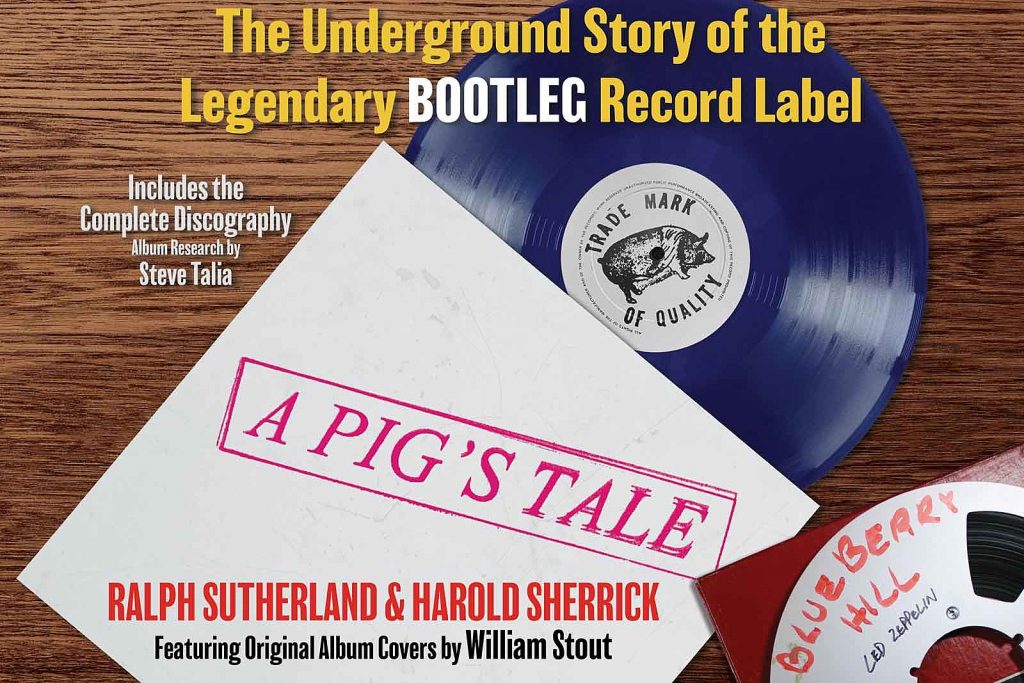 It all started because a Bob Dylan fan wasn’t happy with the direction the singer-songwriter had taken on John Wesley Harding and Nashville Skyline. So the fan took matters in his own hands, crafting a new Dylan album, Great White Wonder, from various outtakes spanning a 1961 hotel-room tape through 1967’s “The Basement Tapes” recordings.

In the summer of 1969, the album began showing up in Los Angeles record shops, and the bootleg industry, for all intents and purposes, was born. In A Pig’s Tale: The Underground Story of the Legendary Bootleg Label Trade Mark of Quality, Ralph Sutherland and Harold Sherrick chronicle the story of the company that was behind some of the era’s greatest borderline-legal LPs: Trade Mark of Quality.

The label – known for its pig logo, colorful vinyl and, later, fantastically illustrated covers – was conceived and operated by a man the book refers to as Pigman, along with his friend Carl. (Other sources have identified the pair as “Dub” Taylor and Ken Douglas.) “Names have been used in such a way to protect the sources of information for the book,” Steven W. Booth, a publisher at Genius Books, tells UCR. “Readers are welcome to draw their own conclusions. We can neither confirm nor deny any such speculation, since that’s just what it is.”

The book’s two writers were on the frontlines from the start. Sutherland was working at one of the Los Angeles record shops where Pigman self-distributed the first Trade Mark of Quality bootlegs; the teenage Sherrick was with Pigman during the recording of several TMQ live albums and accompanied him on his deliveries around town.

“This story took place in another space in time,” Sherrick tells UCR. “It could never happen in today’s world.”

Most of music’s biggest names of the era were subjects of classic TMQ bootlegs: The Beatles, David Bowie, Jimi Hendrix, Jethro Tull, Led Zeppelin, the Rolling Stones, the Who and Neil Young all had multiple records put out by the label.

In addition to covering the narrative from in-person point-of-views, A Pig’s Tale includes photos and detailed grids of the approximately 100 LPs manufactured during TMQ’s original run between 1969-76. It’s a fascinating document of pre-internet history that existed in a shared but divergent timeline during rock’s golden-god years.

Sutherland and Sherrick helped UCR sort through the dozens of albums released by the label back then, with each recommending five personal favorites along with their explanations as to why these records remain such important LPs in the history of rock ‘n’ roll bootlegs.

(A Pig’s Tale: The Underground Story of the Legendary Bootleg Label Trade Mark of Quality is available for order now.)

1. Bob Dylan, Great White Wonder
“This is where the modern bootleg record phenomenon began in the summer of 1969. This double-LP album with the white jacket featured unreleased and never-before-heard tracks by Bob Dylan. The sound quality wasn’t perfect, but the fans and collectors loved it. A sentimental favorite because it could never happen again.”

2. The Rolling Stones, Live’r Than You’ll Ever Be
“This was first Rolling Stones bootleg, released in December 1969. The Stones were captured live on tape in Oakland, Calif., one November night, and everything about this performance and recording and LP was magical. The version of ‘Midnight Rambler’ on this album has never been topped since.”

3. David Bowie, In Person and In America
“On Oct. 20, 1972, David Bowie and the Spiders From Mars performed in Santa Monica, Calif. The concert was broadcast live on a local L.A. radio station. TMQ recorded and released the stereo performance on two TMQ LPs in 1972 and 1973. This was when Bowie really hit America. The official release of this recording did not appear on CD until 2008.”

5. The Beatles, Vancouver 1964
“Beatlemania arrived in Vancouver on Nov. 18, 1964. It was an insane event that was captured live by a local radio station. TMQ discovered and acquired these broadcast tape recordings of the Beatles’ arrival, press conference, coverage of the concert and the actual concert itself. The Vancouver 1964 TMQ double-LP album was released in November 1974. It’s still the only complete document of this historic Beatles concert ever released. Of note: The Beatles performed at the Hollywood Bowl in California the following day.”

1. Bob Dylan, Great White Wonder
“This was the first time ever that any unauthorized recordings were released to the record-buying public. It caused quite a ripple in the music business in the summer of 1969.”

2. The Rolling Stones, Live’r Than You’ll Ever Be
“Considered by many record collectors to be the greatest live Stones LP at that time, TMQ released this LP about nine months before the official release [Get Yer Ya-Ya’s Out! ] on Decca and London Records.”

3. The Who, Fillmore East
“This April 1968 recording is when the Who established themselves as one of the greatest live bands ever.”

4. Led Zeppelin, Live on Blueberry Hill
“This double LP captured the excitement of Zeppelin performing three-hour shows in those days.”