The Best Siskel and Ebert Moments 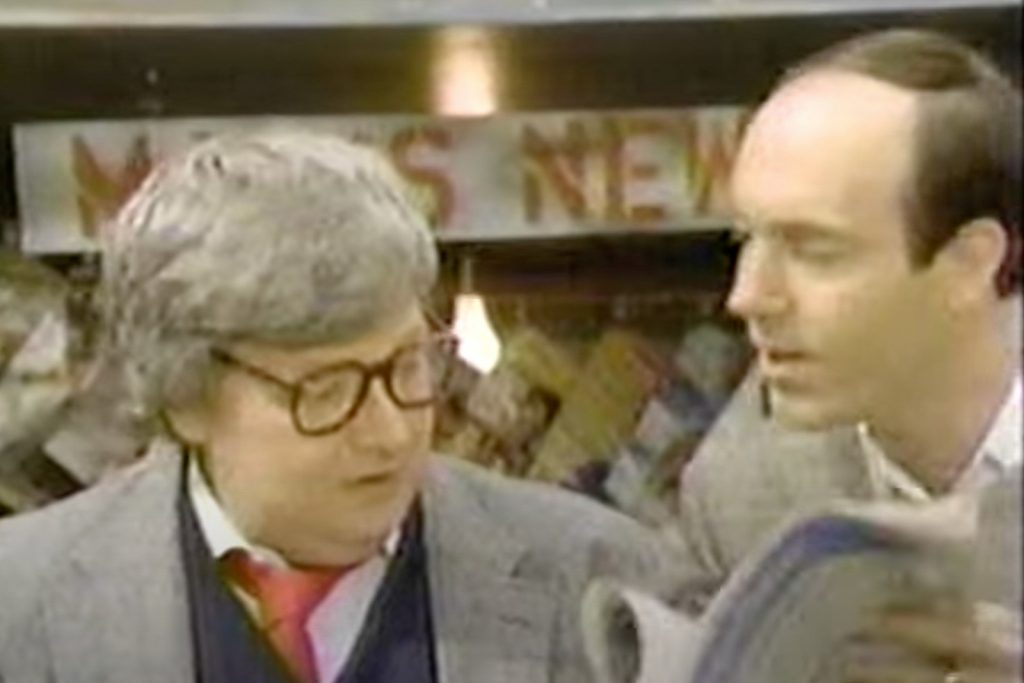 In September 1975, rival film critics Gene Siskel and Roger Ebert joined forces for a lively PBS program called Opening Soon at a Theater Near You. Filming from WTTW studios in their hometown of Chicago, this review show aired locally, once a month — and eventually led to a major shift in the evolution of film criticism.

As the chief critics for the city’s competing newspapers, The Chicago Tribune and The Chicago Sun-Times, respectively, Siskel and Ebert were already household names in the Windy City. But in transforming their review process for the small screen, the pair created a new, highly personal — and highly popular — format. Opening Soon at a Theater Near You was a hit, and in 1977, the program expanded to a biweekly presentation that aired nationally on PBS.

Sneak Previews introduced the entire country to the outspoken personalities of Chicago’s favorite critics. Operating from a set designed to look like a literal theater, Siskel and Ebert themselves emerged as fascinating characters: endlessly knowledgeable and endlessly opinionated about the world of film.

Writing for Chicago’s main newspapers, Siskel and Ebert were at once peers and opponents. On TV, that rare dichotomy flourished into fiery debate. Right down to their physical appearance — the tall and lanky Siskel, the short and stout Ebert — they were as much Laurel and Hardy as yin and yang. And being such passionate critics, they both longed for the last word. Given their stubbornness, episodes teemed with friction. Relentless bickering dissolved, often, into spirited flurries of personal insults. And people loved it.

Delivering critique as entertainment, the show was amusing, informative — and groundbreaking. Aligning with one commentator over the other, loyal viewers could develop a personal stake in the performative debate. Meanwhile the more casual channel-surfer could tune in for the simplified “thumbs-up, thumbs-down” classification they famously coined. Only the best movies, of course, earned the elusive “two thumbs up” rating — consensus, after all, was rare.

Siskel and Ebert would be the first to admit that their televised animosity was no ruse. They really did disagree, vehemently, about many movies. And they were fiercely competitive over the spotlight. Still, Siskel and Ebert appreciated — even loved — one another and continued to collaborate for many years. In 1982, they left PBS for syndication with At the Movies (also known as At the Movies with Gene Siskel and Roger Ebert). Produced by Tribune Media, this iteration of their weekly reviews ran until 1986, when the critics departed from the company over a contract dispute. Then joining with Buena Vista Entertainment, Siskel & Ebert (originally called Siskel & Ebert & the Movies) premiered on September 14, 1986 and ran until Siskel’s sudden death from brain cancer in 1999 at age 53.

Following Siskel’s passing, Ebert said, “Gene was a lifelong friend, and our professional competition only strengthened that bond. I can’t even imagine what it will be like without him.” (On the 10th anniversary of Siskel’s death, Ebert penned a longer, wonderful tribute.) Losing Siskel was a devastating blow. But professionally, their TV show continued in various forms, including Ebert & Roeper: a version which featured Ebert alongside the Sun-Times critic Richard Roeper. During that time, Ebert was diagnosed with thyroid cancer, and he died in 2013 after a long and painful battle with the disease.

Now, in honor of the 35th anniversary of Siskel & Ebert, enjoy some of the most colorful and beloved moments from this truly iconic duo.

This early intro to Sneak Previews really grounds viewers in the romanticism of the movies.

As Siskel and Ebert’s show matured, so did their introduction. The newer opening heavily featured the city of Chicago, leaning into the local celebrity of these hometown heroes.

The Dog of the Week

Every week, Siskel and Ebert brought a pup on-screen to present the Dog of the Week: that week’s worst film. Originally Spot the Wonder Dog, the canine was eventually replaced by other dogs, and even Aroma the Skunk, who aptly introduced the Stinker of the Week.

This guest appearance on The Tonight Show with Johnny Carson went down in infamy.

This whole compilation video is quite the cinema throwback.

They LOVED Do the Right Thing

When Do the Right Thing was snubbed at the 1989 Oscars, both Siskel and Ebert were livid!

Something Siskel and Ebert both agreed on: the masterpiece that was Hoop Dreams. The 1994 documentary charts the growth of young, inner city Chicago basketball players and was both critics’ pick for the best movie that year.

Prior to their careers on TV, both Siskel and Ebert’s newspaper writing was highly regarded, their work on the page bursting with voice. In 1975, Ebert was the first-ever movie critic to win a Pulitzer Prize for Criticism.

The Best Rock Movie From Every Year

A look at the greatest biopics, documentaries, concert films and movies with awesome soundtracks.