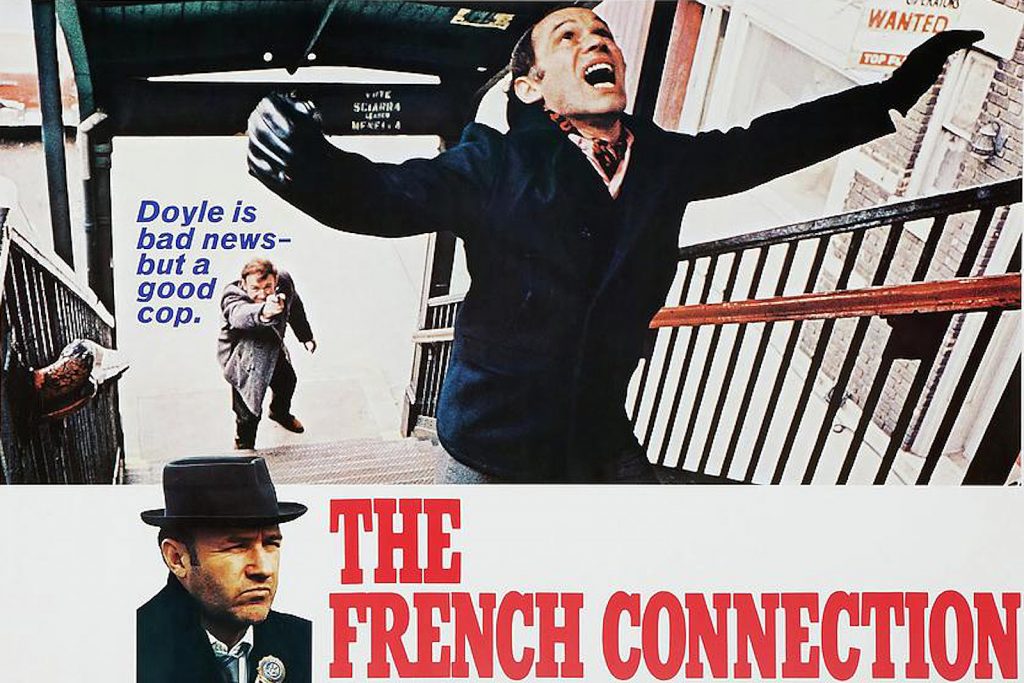 In a biography of Howard Hawks, author Todd McCarthy writes that when William Friedkin was living with Hawks’ daughter Kitty in the early 1970s, Friedkin asked the famed director what he thought of his movies. Hawks said they were “lousy” and told him that “he’d better make something entertaining if he wanted to keep getting work.” Friedkin’s response was to make The French Connection, which premiered on Oct. 9, 1971, and helped to set the tone for an entire decade of American filmmaking.

Before The French Connection, Friedkin – who got his start directing live television and documentaries in Chicago – was known for making quirky, offbeat and relatively cerebral films. But the dawn of the ’70s was bringing a new kind of director to the fore in Hollywood: the independent-minded auteur who told tough stories about the ennui brought on by the American failure in Vietnam and the domestic social upheavals of the era. Directors like Robert Altman, Arthur Penn and Sam Peckinpah had presaged this trend in the previous half-decade by exploring themes of violence and unrest, and the public was looking for more.

So Friedkin decided to move in a new direction. He agreed to direct a screen adaptation of Robin Moore’s 1969 non-fiction book (also called The French Connection) about a pair of tough New York City detectives investigating a group of French smugglers who were bringing heroin into America.

After initially looking for just about any other actor – from Steve McQueen to Lee Marvin to Robert Mitchum – Freidkin cast Gene Hackman as his leading man. Hackman was at that point known mostly from his supporting role in 1967’s Bonnie and Clyde; although he’d been nominated for an Academy Award for that role, it was unclear whether he could pull off a star turn. Friedkin paired him with another up-and-coming actor, Roy Scheider, who had also yet to break out of only being cast in secondary roles.

The two play New York City cops Popeye Doyle and “Cloudy” Russo (based on real NYC cops named Eddie Egan and Sonny Grosso), who are hard-living, hard-working and more than willing to bend the rules to get the job done. At the opening of the film, they learn that a huge shipment of heroin is due to arrive in the next several weeks, under the command of a Frenchman named Alain Charnier (Fernando Rey).

Through surveillance and wiretaps, Doyle and Russo trace Charnier’s American connections, and figure out that he’s smuggling the drugs into the country in a car belonging to a French TV personality. The closer they get to the French organization, the more danger they come into themselves, until finally Charnier tells an assassin who works for him (Marcel Bozzuffi) to kill Doyle. He fails, then then leaps aboard an elevated train to escape. In one of the most famous sequences in ’70s cinema, Doyle chases down the train in a car and then kills him.

Eventually, Doyle and Russo find the drugs hidden in the car and move in to bust the drug ring. In the confusion of the final shootout, Doyle accidentally kills a federal agent who was also on the case. Most of the criminals are caught, but Charnier himself escapes, and a postscript tells us that he was never brought to justice.

It’s a bleak ending to a tough-minded movie. An FBI agent is killed, the bad guy gets away, and the two main cops don’t get the satisfaction of fully solving the case. But in that bleakness, along with the realism that underlies much of the film, the tone of the decade to come had been set.

This quality emerges in large part from the characters. Hackman’s Doyle is prone to violence, a borderline racist, and doesn’t care much for the constraints put on him by the niceties of the law. In this, he’s a perfect representative for the anxieties consuming America at the time. The economy was already entering the downturn that would consume most of the decade, and crime was on the rise. Racial strife was in the air, and the peace and love vibe of the 1960s was already beginning to seem like a distant memory.

Doyle would soon be followed by a string of similar characters. Clint Eastwood‘s Harry Callahan would make his first appearance in Dirty Harry three months after The French Connection, and Charles Bronson’s vigilante avenger Paul Kersey would arrive on the scene the following summer in Death Wish. By the end of the decade, films from Taxi Driver to The Warriors to Freidkin’s controversial Cruising would follow increasingly unhinged characters through dangerous city streets, and take the decay and violence of the new American urban life as their central topic.

Watch the Subway Getaway Scene from ‘The French Connection’

But it’s not just its characters or milieu that makes The French Connection so influential. Cinematographer Owen Roizman helps give the film a bleak, washed-out look that perfectly reflects its themes and would be widely copied in the decade to come. Friedkin and Roizman used all kinds of tricks to add a hyper-real feeling to the film, from using a camera set to film at 18 frames per second rather than the usual 24 during the famous chase sequence, to putting their cameramen in wheelchairs rather than on dollies to dirty up their tracking shots. And, according to Peter Biskin’s Easy Riders, Raging Bulls, Friedkin often “wouldn’t bother to block a scene, just told the cameraman to follow the actors,” so that the shots felt spontaneous and unplanned.

All of this worked to create a film that feels like it’s not just about life on the streets, but comes from them itself, embodying their grime and reality. It helped established a new persona for Friedkin, who would adopt a similarly bleak tone for his turn to horror in 1973’s The Exorcist, and follow his tough-guy characters further into the darkness in later films like Sorcerer and To Live and Die in L.A. And in everything from its downbeat humanism to its technical bravado, The French Connection helped set the stage for one of the most influential decades in American filmmaking.