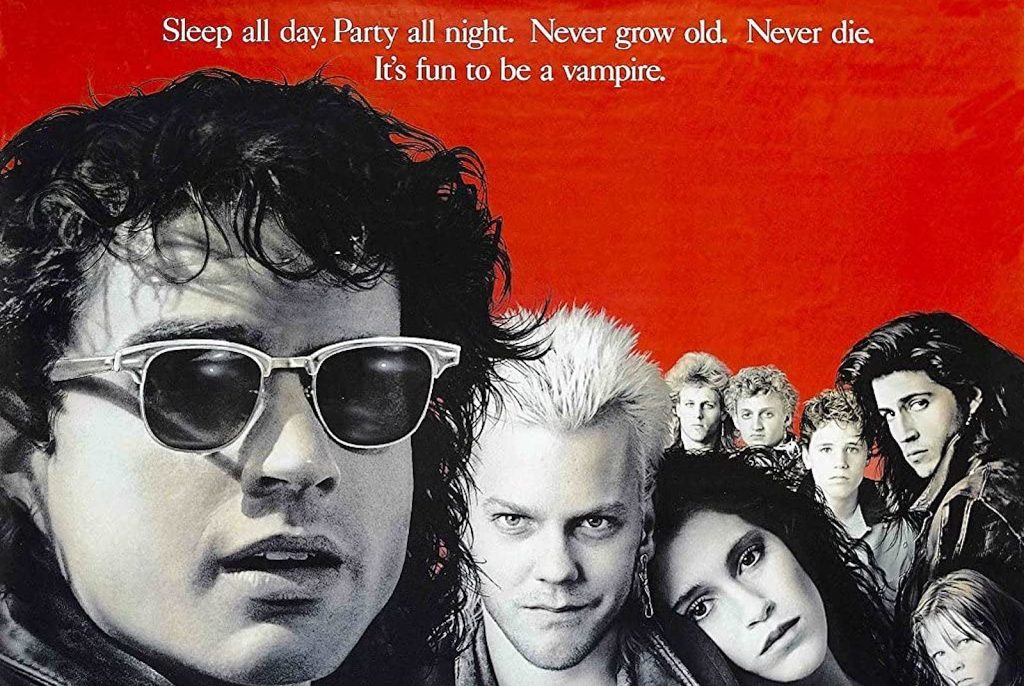 Joel Schumacher‘s teen-vampire horror comedy The Lost Boys opened the door for Twilight, Buffy the Vampire Slayer and True Blood, smashing Hollywood’s tired Transylvanian tropes with a dirt biker’s chortle. But first, the production had to overcome a change in director, a change in direction, casting issues, budget issues and Kiefer Sutherland‘s haircut.

Premiering on July 31, 1987, The Lost Boys found brothers Michael and Sam Emerson (portrayed by Jason Patric and Corey Haim) moving to a new fictional hometown of Santa Carla, Calif. They start hanging out with a group of delinquents who are quickly revealed to be sexy night-creeping vampires, led by Sutherland’s David. Sam teams up with Edgar and Alan Frog (Corey Feldman and Jamison Newlander), who fancy themselves vampire hunters, in an attempt to save Michael from his dark fate.

If the underlying theme of male bonding while resisting the notion of growing up sounds familiar, that’s because The Lost Boys grew out of an earlier script idea based on J.M. Barrie’s Peter Pan. The main characters were to have been “Goonies-type 5th-6th grade kid vampires,” according to the DVD commentary for the film. Sutherland’s character was even going to be named Peter.

“I had read Anne Rice’s Interview With the Vampire,” first-time screenwriter James Jeremias later told Empire, “and in that there was a 200-year-old vampire trapped in the body of a 12-year-old girl. Since Peter Pan had been one of my all-time favorite stories, I thought, ‘What if the reason Peter Pan came out at night and never grew up and could fly was because he was a vampire?'”

The concept was set aside when original director Richard Donner left to focus on Lethal Weapon, though Donner retained an executive producer credit on the film. “What he wanted to do was quite different, which was sort of a cutesy, G-rated movie aimed at young kids,” Schumacher told Venice magazine in 1999. “There were no wild teenagers on motorcycles.”

Watch the ‘Destroy All Vampires’ Scene From ‘The Lost Boys

With Schumacher at the helm, The Lost Boys was transformed into a vampire story for a new generation, dotted with frisky young people, groan-y jokes and MTV-ready songs. When confused studio execs asked Schumacher if he was making a horror or a comedy, he’d simply say, “Yes.”

Alex Winter, who played Marko in the film, said at first “it was impossible to see it working. Let’s take all of these standard rules of vampire lore and let’s squeeze them through almost like a big, gaudy ’80s teen sex comedy — or sex drama, right?” he said in the 2019 documentary In Search of Darkness. “And I was like, ‘That’s going to not work in spades.'” Patric didn’t get it either and kept resisting Schumacher’s overtures. In the 2004 documentary The Lost Boys: A Retrospective, Schumacher says he met with Patric every day for six weeks before the actor finally came onboard.

Schumacher was coming off the hit St. Elmo’s Fire, so he was given some latitude. “We really didn’t know what we were doing then!” he told Venice, with a laugh. “We made it up as we went along. The studio was incredibly patient and supportive, considering they’d never heard of Kiefer Sutherland or Jason Patric or Jamie Gertz or Corey Haim. It was another big chance taken by a studio. We were very lucky.”

Things occasionally became markedly improvisational. “We all just opened up to the experience, we embraced it – which is the only way to make a movie,” Schumacher told Empire. “Don’t hold back.”

Sutherland’s distinctive look, for instance, was shaped by both happenstance and fate.

Watch the Train Trestle Scene From ‘The Lost Boys’

“It’s actually a funny story. Joel Schumacher wanted me to have long hair, and I had long hair at the time and then he wanted it white, a timeless kind of thousand-year-old look,” Sutherland told Yahoo in 2018. “So I dyed it white and my hair was like normally long, like long everywhere – and I just looked like a wrestler! I hated it, and I just thought, ‘That’s awful.'”

Taking inspiration from the contemporary pop-punk star Billy Idol, Sutherland decided to crop the top of his hair – but left the rest long. “So I actually think I might’ve been responsible, or at least partially responsible, for creating the mullet – and for that,” Sutherland added, “I’ll apologize to the death.”

His signature gloves, on the other hand, were worn to cover up a cast. Sutherland was showing off on the beach after the first night of shooting when he lost control of a dirt bike and broke his left wrist.

Money woes had an impact, as Warner Bros. took back $2 million just before filming began. That’s how a piece of unused B roll from Top Gun ended up in The Lost Boys, providing a point-of-view shot as a vampire zooms overhead that Schumacher couldn’t afford to shoot. He also had to agree to direct a music video for INXS to garner their participation in the soundtrack. (Schumacher’s clip for “Devil Inside” arrived the following year.)

“There was a bit of a shame factor at Warner Bros.,” Schumacher told Empire. “People in marketing would say, ‘Well, it’s not really a vampire movie, Joel. It’s really an alienation movie; it’s about the disenfranchised.’ And I said, ‘No. We absolutely are making a teenage vampire movie. Our job is to make the coolest vampire movie ever made.'”

Watch the ‘One Big Coffin’ Scene From ‘The Lost Boys’

The results didn’t quite live up to Schumacher’s stated goal, if for no other reason than the film’s laughably implausible ending. Nevertheless, The Lost Boys might be the coolest vampire movie made to that point.

His film’s legacy, however, will always be wrapped up in what happened next. The Lost Boys was profitable, earning $32 million on an $8.5 million budget, but that wasn’t enough to get into the year’s Top 30 highest-grossing movies. A couple of big-budget sequel ideas were floated, including The Lost Girls, but ultimately only two straight-to-DVD Feldman-starring sequels were released.

Instead, The Lost Boys found its widest audiences in video-rental stores. Those home viewers then grew up to become directors, actors and studio heads who would unleash a torrent of lusty vampire-themed TV shows and films.

For a vindicated Schumacher, that made thematic sense. “I think that a lot of our culture is set up for people to deny who they really are,” he told Venice. “I’m not saying that all people are inherently evil, but we spend so much of the time wanting people to think that we’re perfect – that we don’t have bad thoughts, or do bad things, that we’re all really perfect people – and we are. We’re perfect in our imperfections.”

The Best Horror Movie From Every Year

Counting down a century’s worth of monsters, demons and things that go bump in the night.