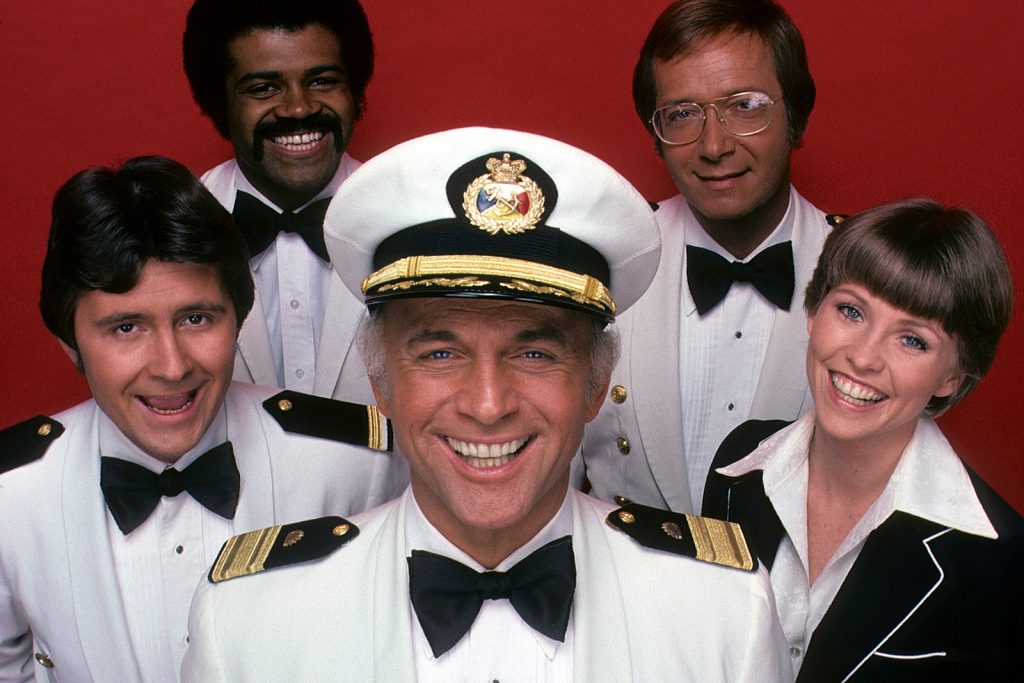 There is a legend that Aaron Spelling, who produced more television shows than anyone in history, once said, “Do you know what our suicide rate would be if we didn’t have television? Do you know how much happiness I’ve brought to people who couldn’t get out of the house but could watch The Love Boat?”

It’s unclear if this utterance ever really escaped Spelling’s lips, but it does perfectly capture the television show it referred to, as well as Spelling’s legacy more broadly.

Premiering on Sept. 24, 1977 (following three made-for-TV prequel movies that had aired in 1976 and ’77) The Love Boat was an hour-long episodic comedy/drama. It aired on Saturday nights on ABC, along with the similarly-themed Fantasy Island, which was also produced by Spelling, and soon became a national sensation.

Watch The Opening Credits of ‘The Love Boat’

Each episode revolved around the adventures of the staff and guests during a journey to exotic destinations aboard a cruise ship called the Pacific Princess (which was a real ship operated by Princess Cruises, although little of the show was actually filmed on it.) There were always three different plot lines: one featuring comedy, one featuring drama and one featuring romance, which are the “three magic words” of television, as Spelling noted in an interview with the Television Academy Foundation.

It was a repetitive structure that relied on broad jokes (it is one of the only hour-long shows to ever use a laugh track) and heavy doses of melodrama, but out of these elements The Love Boat created a sense of romance and escape that absolutely entranced its viewers.

In part, this spell came from the casting. The regulars included Captain Stubing (Gavin MacLeod), who was both firmly in charge and often the butt of the joke, “Doc” Bricker (Bernie Kopell) who was famously amorous with the ladies and had been married (and divorced) six times, a much-beleaguered purser named “Gopher” (Fred Grandy), a friendly bartender named Isaac (Ted Lange) and a plucky young cruise director named Julie (Lauren Tewes). These actors, along with the other regulars, managed to create the feeling that they knew each other well and shared a great deal of camaraderie, which helped give the viewer the feeling that when they tuned in they were becoming part of a fun, close-knit community. The actors were also all adept at handling the swings from comedic to serious that the show’s nine seasons threw at them, which is one of the main reasons the characters they created have lingered so long in popular memory.

Watch a List of Famous Appearances on ‘The Love Boat’

Beyond this, The Love Boat made famous an effective secondary casting approach: each episode featured at least four or five – and sometimes as many as ten – guest stars from other television shows, movies and Hollywood history. There were crossover moments – The Brady Bunch actors Robert Reed and Florence Henderson both guest-starred in one episode, and the 1979 season premiere of Charlie’s Angels (another Spelling production) took place on the Pacific Princess – and appearances by Hollywood royalty, including some thirty-two Oscar winners, along with up-and-coming celebrities from Tom Hanks to Janet Jackson.

This aura of Hollywood past and present gave the show an added romance, surrounding the viewer on each week’s journey with famous faces and memories of other shows and movies. And it relied on the theory that Spelling would use to great effect over and over again throughout the years, from Starsky & Hutch in the ’70s, to Hart to Hart, T.J. Hooker and Dynasty in the ’80s and all the way through to Beverly Hills, 90210 in the ’90s: people don’t watch television to engage with life, they watch it to escape from life.

“I think life is reality enough,” Spelling told the L.A. Times in 1992. “People want to be entertained. They want fantasy, love stories and happy endings.” Modern viewers might be tempted to laugh at this idea, but it earned Spelling a 123-room mansion and the envy of less-successful TV producers throughout Los Angeles.

And maybe the best proof of Spelling’s theory is The Love Boat. Play its famous opening theme song – performed by Jack Jones, with lyrics by Paul Williams and music by Charles Fox – and more likely than not people will still recognize it today, even though the last episode of the show aired in 1986, more than a third of a century ago. Turn on any TV network on any night, and you’ll see the influence of Spelling’s approach to storytelling, and The Love Boat in particular: from our sitcoms to our tent-pole hour-long shows, we’re still interested in comedy, drama and romance, and love things served up to us in multiple story-lines.

It’s a formula that will probably never get old. As Gavin MacLeod, who played Captain Stubing, remembered in a 2007 interview with Entertainment Weekly, “I went to my cleaners. There was a new girl. And she said, ‘Man, aren’t you the captain?’ I said, ‘Well, I used to be.’ She said, ‘You’ve got to tell somebody to put that show back on.’ I said, ‘Why?’ And she said, ‘That show used to give me something to dream about. Nothing on television gives me anything to dream about.'”

The Love Boat did just that. And it worked.