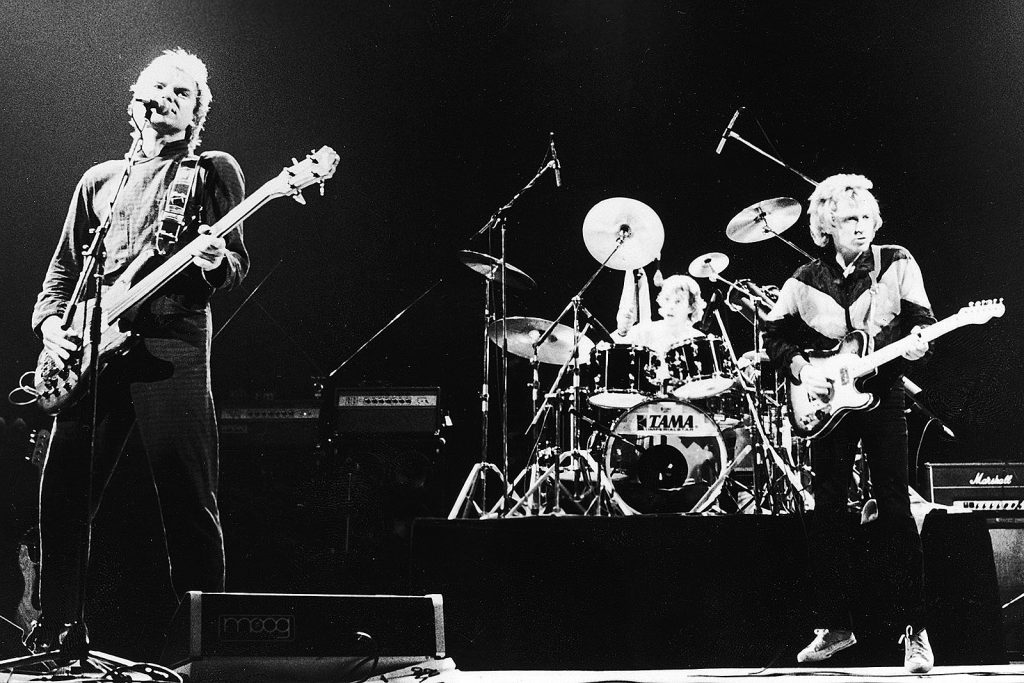 The infamous and often-exaggerated cliche with the Police is that they rarely agreed on anything, despite their obvious musical chemistry. Fittingly, the band’s memories of their first classic-trio show differ wildly — singer-bassist Sting seems to consider it a vital, enlightening moment, but guitarist Andy Summers looks back with disgust.

Technically, it wasn’t the first Police three-piece. The “fake punk” group debuted live in March 1977, with Sting joined by co-founding drummer Stewart Copeland and Corsican guitarist Henry Padovani. (They even released an obscure single, “Fall Out,” that May.) However, the trio briefly expanded into a quartet later that summer, with Summers — who’d played alongside Sting and Copeland in Mike Howlett’s funky two-bass project, Strontium 90 — joining as the second guitarist.

The fit turned out to be awkward: Summers favored a more colorful, versatile style than Padovani’s raw punk attack. And after a pair of shows — including France’s Mont de Marsan Punk Festival, alongside the Clash, the Damned and the Jam — the Police settled into their trio configuration of Sting, Copeland and Summers.

“Andy shows up with his harmonic sophistication, and Sting starts writing these big songs,” Copeland wrote in his 2010 memoir, Strange Things Happen: A Life With the Police, Polo and Pygmies. “A sound of our own is beginning to hatch.”

That sound — an innovative fusion of punk, reggae and new wave — fully bloomed on the band’s debut LP, 1978’s Outlandos d’Amour. In the meantime, the Police still had some gelling to do. The new trio’s first headlining performance took place on Aug. 18, 1977, at Rebecca’s, a small nightclub in Birmingham, England, where the original lineup had previously backed punk singer Cherry Vanilla.

Sting describes the Police show with romanticized intensity in his 2004 book Broken Music, calling it a “crucial Rubicon” that could have brought one of two outcomes: “We will either cross it successfully or our fragile enterprise will be swept downstream in a chaos of despondency and abandoned dreams,” he wrote.

“We walk onstage, the lights come up, and out of sheer desperation, panic, and I suppose character we somehow manage to kick off the shackles of self-doubt and despondency,” Sting added, “and within the first eight bars of the first tune begin to play with the unrelenting power of a 10-ton hammer.”

He described the rest of the gig as “total mayhem,” ending with “three encores” and the destruction of a drum kit as they walked to their dressing room. “I know, perhaps for the first time, that I have found a flagship for my songs,” Sting added. “We will prevail. It will take time, but now I’m certain of it.”

Summers’ recollection of this period is a bit less fond. The guitarist dismisses their early songs as “terrible” and unoriginal in his 2007 autobiography, One Train Later. “What we have is a fast, furious row more like three brats misbehaving, more the sound of a fashion statement than a musical message — and it’s worthless,” Summers wrote. “In a nutshell, we suck.” He also writes disparagingly about playing the venue “on the day Elvis [Presley] dies.” (Technically Presley died on Aug. 16, 1977. Both Sting’s website and Setlist.fm list the show at Rebecca’s happening two days later.)

“The prevailing style is easily described,” Summers recalled. “It’s very fast, very loud and features heavily garbled shouting noises usually accompanied by large mouthfuls of spit. We go onstage in the small, dark club and whip through our entire set, accomplishing all the above values, and are done in about [12] minutes. We are supposed to play for an hour. … We are so intent on being viewed as punk that we miss the music entirely. … We are a band, but to me, it feels like one in name only.”

Perhaps the show fell somewhere between triumph and tragedy. Either way, the reconfigured Police eventually proved themselves, playing more shows that year before starting work on Outlandos d’Amour in January. In his book, Sting writes that “something rare [had] been uncovered” in Birmingham. Whether or not his bandmates agreed, pretty much everyone else would soon enough.

The Most Awesome Live Album From Every Rock Legend

Some of these concert recordings sold millions of copies, while others received little fanfare. Still, they remain the best of the best.