The Revenge’ Sinks the Franchise for Good 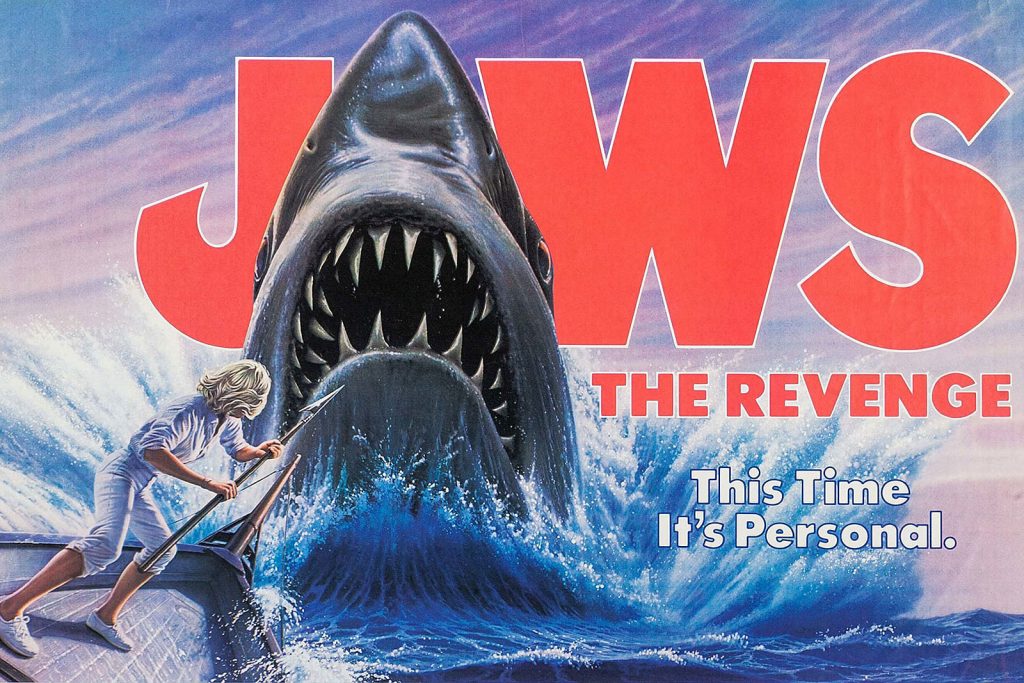 Jaws was a global phenomenon. Steven Spielberg’s jumped-up monster movie rode a wave of perfect casting, ingenious directing, striking (if infamously balky) special effects, an indelible John Williams score and a carpet-bombed Universal marketing campaign to essentially create the modern blockbuster. It’s also, all these years later, still one of the most rewatchable and entertaining films ever made.

Sequels were inevitable, Jaws eventually pulling in nearly a half-billion 1975 dollars and providing a seemingly can’t-miss template for future installments. Sadly for giant-shark fans, a template isn’t a finished film, and with ascendant wunderkind director Spielberg thoroughly uninterested in returning to the shark-infested Amity waters, each of the successive three Jaws films plummeted ever further in both critical appraisal and box office return.

It’s in that Mariana Trench of comically inept and soulless filmmaking where viewers must venture to find 1987’s legendarily risible Jaws: The Revenge. While the cookie-cutter simulacrum that was Jeannot Szwarc’s Jaws 2 (1978) at least boasted a mostly returned main cast, and the turgid stunt that was 1983’s Jaws 3-D had the novelty factor of three-dimensional jump scares, Jaws: The Revenge remains perhaps our purest example of profit-chasing, bottom-scraping studio calculation. The Jaws franchise was already considered more of a studio attraction than a viable artistic endeavor by the time Joseph Sargent’s film splashed down, but Jaws: The Revenge added in levels of slapdash incompetence and storytelling insanity enough to at least provide viewers with something truly disastrous to gawk at.

Sargent, a workmanlike director with one undisputed classic under his belt (1974’s The Taking of Pelham One Two Three), was, to be fair, given a ridiculously short filming window to get Jaws: The Revenge up onto summer 1987 movie screens. MCA Universal head Sidney Sheinberg saw a fourth Jaws film as a stopgap solution to the company’s mounting money woes and rushed Sargent into production without a completed script, as well. Still, the sheer number of continuity errors, visible, wheezy shark-operating mechanisms and frequently incomprehensible action sequences surrounding the heroic Brody family’s latest run-in with a killer great white make for prime drinking game material. (If you can last until the climactic scene where co-star Michael Caine’s ocean-soaked clothes are suddenly bone dry, drink.)

Even more damning — and utterly baffling — is the film’s central conceit. You know, the one where stalwart widow Ellen Brody (Lorraine Gary, in what would be her last acting role) becomes (correctly) convinced that the giant fish terrorizing what’s left of her family is doing so because of a personal vendetta against the Brodys and all their shark-killing ways. The film starts with Brody’s youngest son Sean (now an Amity cop like his late dad) being eaten while untangling a buoy from a floating log, an inciting incident, which the film inescapably implies, was set up as a Brody-baiting trap. By a shark.

Ellen, throughout the film, is also implied to have some sort of psychic connection with the shark, Gary going glassy-eyed and furiously protective every time she senses the shark is setting its beady doll’s eyes on one of her kids. Ellen also has developed the ability to flashback to scenes to which she was not a witness, like Sean’s lonely death, and (thanks to sepia-toned stock footage of the long-ago original film), Roy Scheider’s Martin dispatching the progenitor shark with a well-placed bullet to the swallowed scuba tank.

Then there’s the matter of the shark’s ability to track the Brodys from Massachusetts to the Bahamas (traveling 1,900 miles in three days), where the last surviving son Michael is pursuing a career in very vulnerable underwater research. (Jaws: The Revenge waves away Jaws 3-D entirely, so goodbye, overacting Dennis Quaid as Michael.) The whole “This time it’s personal” (the film’s actual tagline) shark-vengeance idea is implausible, as is a subplot included in the subsequent novelization about a Brody-targeted voodoo curse.

When you’re this far down the filmmaking abyss, it’s tempting to regard Jaws: The Revenge as a “so bad it’s good” movie, but this misbegotten sequel can’t even do that correctly. Gary, so warm and believable back in 1975’s original, is hardly more than a Carcharodon carcharias early-warning system, despite the long-widowed Ellen making tentative steps toward rekindled romance with Caine’s scoundrel island pilot Hoagie. (Some point to Gary’s marriage to Universal’s Sheinberg as damning nepotism, but, at least in the first two films, that doesn’t hold up to scrutiny.) Paycheck-happy Caine himself has reportedly never seen the film but has been quoted as saying that the house it bought him is quite nice indeed. He also had to skip his big Oscar presentation for Hannah and Her Sisters thanks to studio water-tank reshoots, his $1.5 million salary for his seven-day trip to the Bahamas perhaps taking the sting out of it. The Last Starfighter’s Lance Guest makes for a blankly fretful Michael this time out, and family melodrama in the Bahamas swamps talented castmates Karen Young, Lynn Whitfield and Mario Van Peebles (sporting his version of a Bahamian accent) in tedious land-locked dialogue scenes.

Is there anything worthwhile in this film? Even playing “spot the gaffe” becomes dispiriting to anyone who can manage to conjure up memories of the unimpeachable first movie. When a sequel has drifted so tragically far from the sterling, thrilling place of its birth, not even the laughable spectacle that is Jaws: The Revenge’s bananas ending can save the experience.

Reshot after audiences found the original climax underwhelming, the final version (the one available on DVD and streaming) sees this iteration of Bruce the shark, looking especially rubbery and clunky in the bright Bahamas sun, leaping into the air, being impaled on the splintered prow of the boat carrying Gary, Cain and Guest, and then, inexplicably, exploding into a presumably more crowd-pleasing red bisque of shark-gore. That the original ending saw Van Peebles’ sidekick being graphically eaten and Bruce simply succumbing to his wounds might, indeed, be a bit anticlimactic, sure. (Van Peebles impossibly survives in the revised cut, despite a set of shark bites nasty enough to test the limits of Wolverine’s healing factor.) But rest assured that both versions gift this last great white of the Jaws franchise with a very audible and unmistakable, lion-like mighty roar as he comes in for the kill.

In the end, Sheinberg got the modest hit he was looking for, with the Jaws name good enough for approximately twice Jaws: The Revenge’s $23 million budget. That despite the film being savaged, Bruce-like, by critics and audiences, and the Jaws franchise becoming forever seen as a cautionary tale of Hollywood greed trumping quality or legacy. Plus, the shark roars.