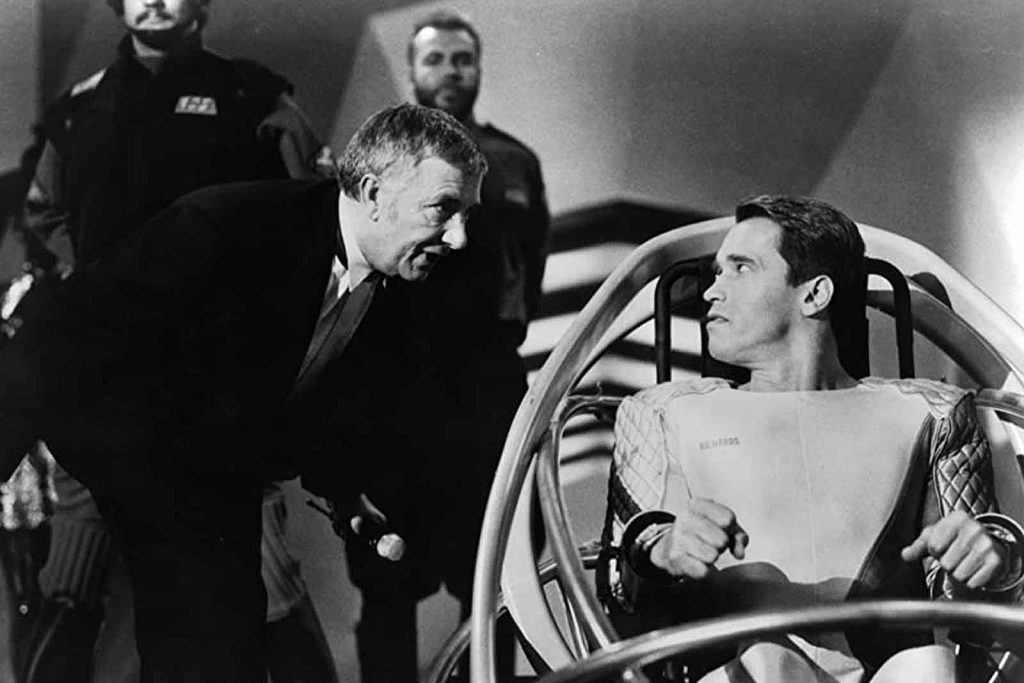 Being released just four months after Paul Verhoeven’s similarly dystopian satire RoboCop didn’t do the 1987 Arnold Schwarzenegger vehicle The Running Man any favors in retrospect. Like RoboCop, The Running Man posits a near-future where corporate-backed fascism is on the rise and the impoverished masses are placated with low-brow programming and leering propaganda. (Both films’ settings are also near enough to their 1987 release date that the incursion of their high-concept technologies takes place among some affordably recognizable urban settings.)

But while RoboCop had the profligately imaginative Verhoeven pulling the satirical strings, Schwarzenegger was saddled with TV-star-turned-director Paul Michael Glaser (of Starsky and Hutch fame) to craft The Running Man’s over-the-top world of bloodthirsty game shows and outsized costumed killers. Glaser, who’d made his feature directing debut with the previous year’s delinquents-vs.-drug-dealers Everglades actioner Band of the Hand, brought along a decidedly pinched and hasty TV style to the film’s bombastic action. In a fictional America where convicted criminals are set loose in a funhouse-style killing field and hunted by superstar costumed “stalkers,” Glaser’s shots constrict the action, while he depicts Schwarzenegger’s many fight scenes in enervating close-ups and workmanlike editing.

It’s especially crippling since The Running Man was intended to give ascendant action icon Schwarzenegger a big, flashy, bloody cartoon of a star vehicle. Producer Rob Cohen reportedly had no idea that the film’s novel source material was written by eminently bankable horror author Stephen King, as the 1982 book was written under King’s Richard Bachman pseudonym. The film contains no onscreen mention of King’s involvement, while the movie’s sillier tone omits much of King’s gritty nihilism (including the book’s eerily airplane-based pre-9/11 climax.) But clearly, Cohen’s conception of the project was wildly different than King’s original tale, at any rate, retaining merely the central game-show concept while jettisoning King’s much grimmer milieu in favor of pitting Schwarzenegger’s disgraced cop Ben Richards against a slew of similarly enormous, gaudily kitted-out behemoth killers. The film also firmly follows the Schwarzenegger formula of smirking post-kill one-liners, with his protagonist dropping ready-made quips upon dispatching his adversaries. (“He had to split,” Richards relates to reluctant sidekick Maria Conchita Alonso after gruesomely bisecting stalker Buzzsaw with his own weapon.)

Schwarzenegger, fresh off of a string of solid post-Terminator hits, is flexing his Hollywood muscles in the lead role. His Ben Richards sports a sweatshirt for the Schwarzenegger-owned World’s Gym for part of the film, while, even in the squalor of a revolutionaries’ shantytown or in the middle of a climactic raid on the titular game show’s gleaming studios, the star can always rustle up one of his signature cigars. Meanwhile, the testosterone-swollen cast includes longtime Schwarzenegger bodybuilder pals like Sven-Ole Thorsen and Franco Columbu in small roles, while Schwarzenegger’s supposed framed everyman Richards is not only insanely swollen but faces down every situation with the actor’s then-ubiquitous penchant for groan-worthy bon mots. (The film even has Richards warn his nemesis, upon being sent via rocket-sled into the game zone, “I’ll be back,” contributing to The Running Man’s anything-Arnold-wants cheesiness.)

What The Running Man does have going for it is one piece of inspired casting in the form of actor and former Family Feud host Richard Dawson. As the smarmy Damon Killian, Dawson sends up his image as a drolly phony, lady-kissing game-show lizard. Peering over potential contestant victims for his government-backed television enterprise, Dawson seizes upon footage of the burly Richards’ escape from a government prison, purring, “Hi, cutie pie,” with visions of smash ratings in his eyes. It’s in Killian’s character that The Running Man comes closest to approximating the sledgehammer corporate satire of Verhoeven’s far superior film (a poster for other TV hit The Hate Boat is about as clever as The Running Man gets), with the smug host demanding – after initially thwarted in his attempt to recruit the on-the-run Richards – to speak to the Justice Department’s “entertainment division.” (And eventually, “the president’s agent.”)

The Running Man’s central conceit falls into the bread-and-circuses future dystopia genre, with the spectacle of Killian’s weekly televised manhunt blurrily depicted as the one thing that keeps the oppressed masses sedated enough not to rise against the government. (Chopper pilot Richards’ crime is not following orders to mow down unarmed civilians engaged in a “food riot.”) As in The Purge, The Hunger Games, The Tenth Victim, Series 7: The Contenders and other such high-concept genre exercises, it’s best not to inquire too deeply into the logic behind The Running Man’s murder-as-pacification approach toward population control, especially since the film is far more concerned with watching Schwarzenegger take down an ever more outlandish array of foes. Still, Dawson’s growling, glad-handing showman goes a long way toward at least selling the idea that a little bloody razzle-dazzle can distract the masses with glitzy bloodlust (and copies of The Running Man home game). “It is a contact sport,” Killian explains to a panicked government official after Schwarzenegger manages to kill off one of his fan-favorite pursuers.

Sadly, Schwarzenegger’s indestructible protagonist is far less interesting except as a vehicle for the star’s ever-burnishing star image. After escaping his initial prison (alongside more human-sized fellow prisoners Yaphet Kotto and Marvin J. McIntyre), Richards scoffs at his partners’ revolutionary ambitions, Schwarzenegger effortfully terming them “a bunch of low foreheads who think they can change the world with dreams and talk.” (The rebel leader is played by rocker Mick Fleetwood who, it’s slyly hinted throughout, may be intended to be the actual Mick Fleetwood, masterminding the revolution alongside henchman Dweezil Zappa.) Yet Richards had previously landed in his predicament by suddenly refusing to follow the orders of a tyrannical government he’s been happily enforcing for years.

Breaking into her apartment (formerly that of his never-seen brother, who’s been sent for “reeducation”), the massive fugitive immediately ties up the lingerie-clad woman, steals her money and passport, threatens to blackmail her with her collection of government-banned music (on cassette tapes, naturally) and, to seal her cooperation, offers to dangle the terrified woman out of her high-rise window. It could fit if Richards were established as a Snake Plissken-style antihero, but we’ve already been treated to his seeming crisis of conscience in that helicopter, not to mention his later self-sacrifice in entering the game to spare the captured Kotto and McIntyre, so Schwarzenegger’s intermittent, quipping assholery just hints at the slapdash tonal mishmash that is The Running Man.

Once Schwarzenegger winds up, alongside Kotto, McIntyre and Alonso, in the game proper, The Running Man becomes a series of near-identical, indifferently staged set pieces. (Plus, the internal logic of the game’s geography makes absolutely no sense, with the evil corporation’s vital signal-sending facility located smack in the middle of the action.) The stalkers themselves are a motley gaggle of shakily conceived crowd-pleasing bruisers, each hulking actor chose to present at least an initial challenge to the muscular star in his form-fitting padded jumpsuit. Casting former wrestlers in Professor Toru Tanaka and Schwarzenegger’s future Predator costar Jesse “The Body” Ventura is canny enough, as the predetermined outcome of the weekly contest is intended to slake the audience’s thirst for a cathartic good-over-evil morality play. The same goes for the casting of former football badass Jim Brown as the aging but still-formidable Fireball, even if the film swaddles the former NFL star in saggy chainmail and an unwieldy flamethrower back-jetpack. Most outlandish is the casting of the massive former opera singer and actor Erland van Lidth (fearsome prisoner Grossberger in 1980’s Stir Crazy) as the electricity-shooting Dynamo, first seen crooning an aria from The Marriage of Figaro to the awed delight of Killian’s studio audience.

But there’s no consistency to each stalker’s gimmickry. Weightlifter Gus Rethwisch���s Buzzsaw not only uses chainsaws but rides into battle on a motorcycle, while formidable wrestling legend Tanaka is bulked out with clunky armor and saddled with a hockey player motif. Meanwhile, Dynamo’s lightning powers necessitate him riding into combat in a souped-up dune buggy straight from an Italian post-Road Warrior knockoff. That said, as each successive stalker is killed off by Richards, there’s a resonance to watching the next celebrity killer in line have to abandon the booze-and-babes locker room party to don their gear for battle. Ventura’s Captain Freedom, a semiretired game legend now happily ensconced as an exercise video pitchman and long-winded jock commentator has the best role of the bunch, even if his showdown with Schwarzenegger is supplanted by the desperate Killian’s body-mapping TV trickery.

In the end, The Running Man proved a modest success, although its take of $39 million (on a $27 million budget) was a disappointment considering Schwarzenegger’s drawing power at the time. (1985’s Commando returned nearly six times its $9 million budget, for example.) And with Predator having exploded at the box office and in the public consciousness earlier that summer, The Running Man was quickly relegated to also-ran status in Schwarzenegger’s filmography, with the actor publicly running down director Glaser and producer Cohen for stripping away many of King’s darker elements. What Schwarzenegger got, however, was hardly far removed from the outsized action 1980’s spectacles that made him, The Running Man’s sledgehammer political satire at least setting it apart in its lunkheaded manner.

The Best Horror Movie From Every Year

Counting down a century’s worth of monsters, demons and things that go bump in the night.