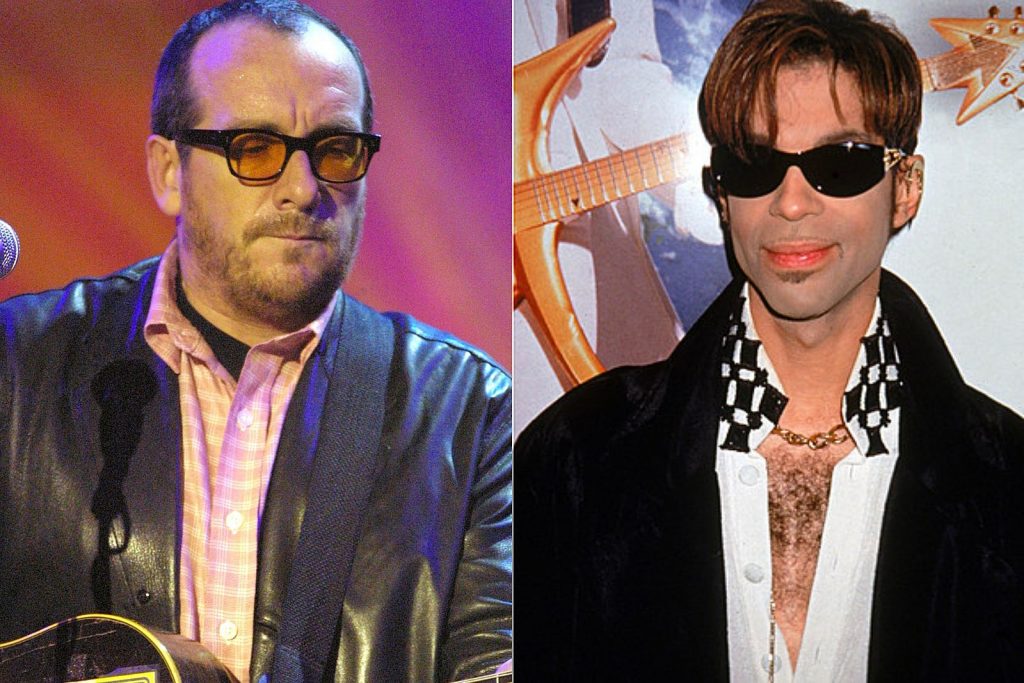 In 1997, Elvis Costello approached Prince and asked if he could record his 1985 hit “Pop Life” for his upcoming compilation, Extreme Honey: Very Best of Warner Bros. Years. Costello and the Attractions had previously played the song live “in the style of [John Lennon‘s] ‘Instant Karma,'” as he put it to the Chicago Tribune in 1999. Costello was aiming to do it with a “slightly lighter feel” in the studio.

Prince’s answer was a resounding no, but it likely had nothing to do with Costello. The pop star had recently broken free from his contract with Warner Bros. and had a reputation for denying cover requests. But it’s not clear if Prince was even aware that Costello’s cover would appear on a record being released by Warner Bros.

“I don’t mind fans singing the songs. My problem is when the industry ‘covers’ the music,” Prince explained on Lopez Tonight in 2011. “See, covering the music means that your version doesn’t exist anymore. A lot of times, people think I’m doing Sinead O’Connor‘s song and Chaka Khan’s song when in fact I wrote those songs. And it’s OK when my friends ask to do them, but there’s this thing called the compulsory license law, which allows artists, through the record companies, to take your music at will, without your permission. And that doesn’t exist in any other art form, be it books, movies — there’s only one version of Law & Order. There are several versions of ‘Kiss’ and ‘Purple Rain.'”

Costello presumably didn’t fit under the “friend” category at the time, but he swiftly came up with an alternate plan. “I wrote this other song with the same sort of rhythmic feel,” he said in 1999, referring to “The Bridge I Burned,” “which I liked better than ‘Pop Life,’ because you know what? I actually think I’m a better songwriter than he is. I know it’s immodest of me to say, but I think it’s the truth. And then I thought I would do him the favor of quoting his song in mine, and he didn’t seem to take the compliment.”

Costello viewed the matter more lightly than Prince did. “I thought he might actually find my song funny, and particularly the fact that I wanted to quote lines from ‘Pop Life,'” Costello noted. “Whether he ever even heard the track, I don’t know, but suddenly I got some highly threatening letters from the lawyers. So I did what you always do in that situation: I shouted some renaissance philosophy through a megaphone in place of those verses and put the record out anyway.”

Still, some cheeky references were left in Costello’s song, like a Prince-like “Dig it!” that sounds similar to the one heard in “Pop Life.” There’s also a line in the song’s second verse – “You mutter underneath your breath, it echoes round the world” – that nods to “Pop Life”‘s parent album, Around the World in a Day.

Listen to Elvis Costello’s ‘The Bridge I Burned’

Two cease-and-desist letters later, “The Bridge I Burned” appeared on 1997’s Extreme Honey: Very Best of Warner Bros. Years. At that time, the two songwriters had never met, but Costello revealed in 2013 that they eventually did meet at a function for Barbra Streisand, “although we only communicated in sign language,” Costello told The Guardian.

That same year, Costello performed at a Prince tribute concert at Carnegie Hall, where he sang an unreleased Prince song, “Moonbeam Levels.” He’s also covered “Purple Rain” on a handful of occasions –  all water under the burned bridge he burned.