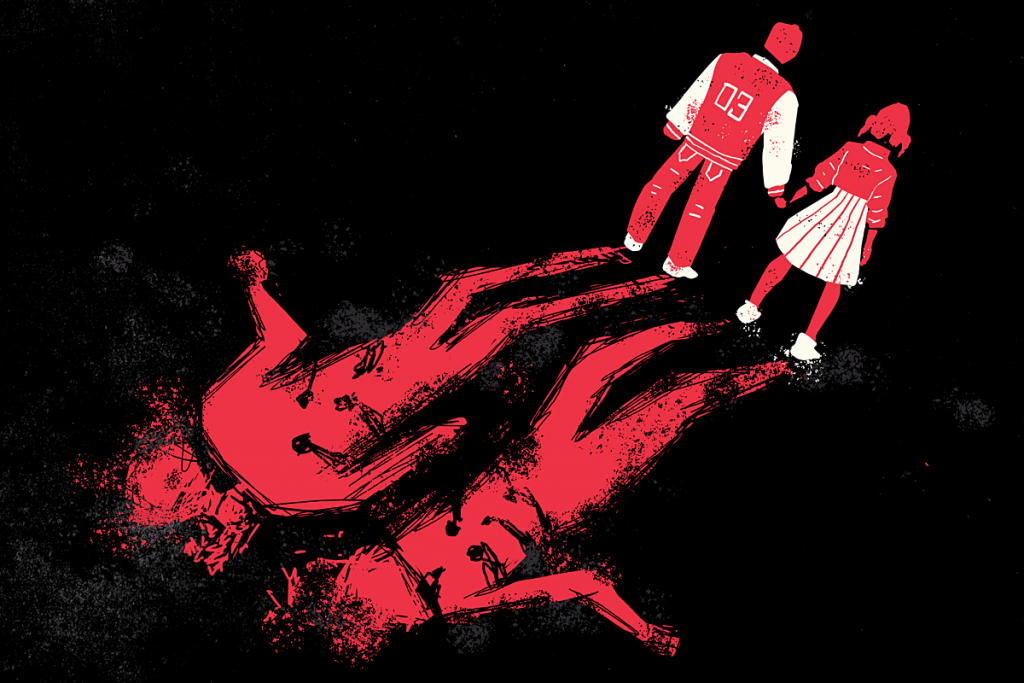 In the song, a “young Indian brave” named Running Bear finds himself in love with Little White Dove, an “Indian maid” from another tribe. Doomed to be forced apart by the warring factions, the pair throw themselves into a raging river and share a final kiss before winding up “together in their happy hunting ground.”

The track’s three-week stint at No. 1 was followed by the two-week reign of “Teen Angel,” Mark Dinning’s tear-jerking tale of a boy who saves his girlfriend from a broken-down car on a railroad, only to lose her when she runs back to the car to collect the ring he gave her. “I’ll never kiss your lips again / They buried you today,” he laments.

The “splatter platter” or “death disc” became a trend that would swarm through the charts for the next four years, and it would never quite go away for the rest of songwriting history. Perhaps best summed up in the Shangri-Las’ 1964 hit “Leader of the Pack,” the ballads shared certain characteristics – as TV Tropes put it, “Expect spoken word bridges (recited through an echo chamber), sound effects (crashing cars, swishing waves), and some of the most attractively orchestrated arrangements in early rock recordings. Many, though not all, of them are inexplicably upbeat if you don’t pay too much attention to the lyrics.”

The teenage tragedy was a surprise success story, tied in with a real-life tragedy. The week after the Cheers released “Black Demin Trousers and Motorcycle Boots” in 1955, heartthrob actor James Dean died in an automobile crash. The song went on to sell over a million copies. While a couple of other hits began exploring the same concepts – notably Jody Reynolds’ “Endless Sleep” in 1958 – Eddie Cochran’s “Three Stars” marked the day Buddy Holly, Richie Valens and J.P. “The Big Bopper” Richardson died together in a plane crash. (Richardson had actually been the writer of “Running Bear,” while Cochran was himself to die in a car crash in 1960.)

While it had all started with the a form of star-crossed lovers balladeering – which goes all the way back, at least, to William Shakespeare’s Romeo and Juliet – other voices began to explore other aspects of how difficult it really was to be a teenager, stuck somewhere between doing what you’re told and feeling there are other things you should be doing; old enough to shoot a gun but not old enough to marry; those insistent twistings from parts of your anatomy that had never moved before; and, sometimes, a sense of frustrated longing so deep and dark that it might seem like a form of death. Big names got in on the act – Johnny Cash sang about a tragic young cowboy in “Don’t Take Your Guns to Town” in 1960, while Roy Orbison lamented the (supposed) death of “Leah” in 1962.

Of course, the authorities weren’t keen on this apparent subversion of rock ’n’ roll, a rebellious form of expression they’d only recently managed to contain. Amid fears of encouraging suicide, some splatter platters were banned, which, predictably enough, ensured their success. One example was Dickey Lee’s “Patches” from 1962, where parents force a couple to split, a girl drowns herself and the boy vows: “It may not be right but I’ll join you tonight / Patches I’m coming to you.”

Over the years, “Leader of the Pack” has come to represent the teenage tragedy genre. Parents force boy and girl apart, boy races off on his motorcycle, girl sees him fall off and die, girl tells her tale to her classmates. “Somehow, what should come across as profoundly silly ends up cutting straight into your soul,” Billboard noted. “[I]f you’re smirking at the 17-second mark, you’re genuinely devastated at 2:09 when lead singer Mary Weiss intones, ‘At school they all stop and stare / I can’t hide my tears but I don’t care / I’m sorry I hurt you, the leader of the pack.’”

Shangri Las – ‘Leader of the Pack’

If anything gives a musical style the status of genre, it’s the inspiration of a counter-genre, and a host of teenage tragedy parodies prove that status. Perhaps the ultimate example is Jimmy Cross’ 1965 track “I Want My Baby Back” – driving home from a Beatles concert, boy and girl encounter heavy rain and narrowly avoid a stalled car up ahead, only to steer into a motorcyclist and crash. “Well, when I come to / I looked around… And over there was my baby / And over there was my baby / And way over there was my baby.” Boy decided he can’t live without dead girl, and – in a scene mostly left to the imagination – achieves “hot dang pay dirt.”

Jimmy Cross – ‘I Want My Baby Back’

Splatter platters were one of the several American trends that were swept away by the British Invasion of the mid-‘60s. But something to tantalizingly rebellious and emotional was never going to be left alone for long. While songs like Meat Loaf’s anthem “Bat Out of Hell” shamelessly played to the nostalgia value of the weepies, others continued to explore the real unexplainable emotional difficulty of being a young adult. Kiss classic “Detroit Rock City” is a tribute to a real-life fan who died on his way to a show. Pearl Jam – who covered Wayne Cochran’s 1961 death disc “Last Kiss” – took the concept to another level with “Jeremy,” akin to the Boomtown Rats’ high school shootout reflection “I Don’t Like Mondays.” Then there’s Skid Row post-crime lament “18 and Life” and Aerosmith’s dark revenge story “Janie’s Got a Gun,” and many, many songs in the emo genre. Through works like those, teenage tragedies became less of an exploration of the loss of innocence and more of an examination of social trends. Which is a very good argument for the genre to continue.