The Successful Regeneration of ‘Doctor Who’ 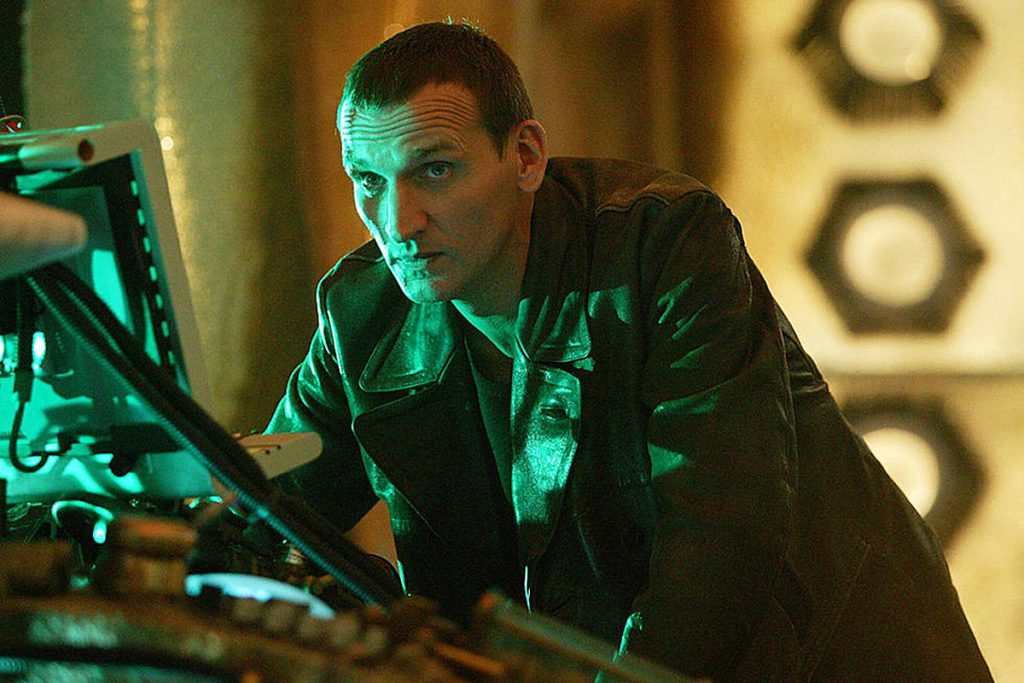 If it was a difficult regeneration for the Doctor himself, it was a successful one for the TV show named after him.

On Mar. 26, 2005, Christopher Eccleston made his first appearance as the Ninth Doctor, and justified the years of work showrunner Russel T Davies had put into bringing Doctor Who back.

Like any number of sci-fi shows, it had suffered at the ends of a corporation that liked its figures but distanced itself from its values. Some controllers of the BBC had exhibited outright contempt for the show and it had suffered budget cuts, time-slot swaps and forced budget cuts.

In December 1989, sensing it was all over, the production team had finished up with Seventh Doctor Sylvester McCoy and his companion, Ace, walking away across a field into a woodland, as he told her, “There are worlds out there where the sky is burning, and the sea’s asleep, and the rivers dream; people made of smoke and cities made of song. Somewhere there’s danger, somewhere there’s injustice, and somewhere else the tea’s getting cold. Come on, Ace. We’ve got work to do.” (The 1996 Dr. Who TV movie is canon and features McCoy’s regeneration into Paul McGann’s Eighth Doctor.)

Watch the Last Scene of ‘Doctor Who’ Series 26

Davies picked up that work a few years later. An avid fan, he knew the show badly needed attention at a time when fans were turning to glossy pieces like Star Trek: The Next Generation. For some time his arguments had fallen on deaf ears, but over the years, as he became one of the U.K.’s most successful TV writers, those ears began to listen.

“They’d phone me up and say, ‘Do you want to write A Tale of Two Cities?’ and I’d say ‘No, I want to write Doctor Who,’” he told The Guardian in 2005. “I had two meetings, one in 1999 and one in 2002, where I told them what I would do with it, though I don’t think they had any effect in themselves. But when Lorraine Heggessey [controller of BBC1] decided to bring it back, in their minds I was associated with it – which was brilliant. If I’d done that deliberately, I would think it a brilliant policy.”

Davies noted that he was “worried they meant a cheap pastiche version, or an ironic version, but it was the real deal – Saturday night, proper budgets. All those things you think you’d have to fight for. Astonishing. … I’ve worked on it for a year now and I still don’t know what happened at a very high level to get it returned.”

When Davies’ first episode, “Rose,” aired, longtime fans encountered a completely different style of storytelling. Inspired by the examples offered by shows that had come and gone, themselves inspired by the original Doctor Who, the production concentrated mainly on single-episode adventures.

The pace was faster, the characters were explored to a deeper extent, and – importantly – the figure of the companion as the eyes of the audience was completely revamped.

Watch ‘Doctor Who’ Season One Trailer

Eccleston, an acclaimed actor with a reputation for bringing depth and darkness to most of his characters, was unlike any Doctor previously seen. The only survivor (he believed) from the Time War, in which the Time Lords and Daleks closed their millennia-old account with each other, he was angry, repressed and sarcastic – but his age-old sense of fun and curiosity was fighting to get out.

Companion Rose Tyler was played by Billie Piper, an intriguing choice since she was previously best been known for being a bubblegum-pop child star. But her everywoman depiction of someone who had the same sense of bewilderment and disconnection with modern life that many of the viewers felt, along with the way she was surprised to find how much courage she had deep inside her, meant she spoke directly on the audience’s behalf. “She’s on par with the Doctor,” Piper told the Radio Times in 2005. “They teach each other. She’s quite closed off from the world, but she could, potentially, be somewhat brilliant. He shows her how to do that. And equally, she shows him how to be sympathetic, how to have morals and express his emotions. It’s an interesting dynamic.”

“Rose” opens with a zappy title sequence that shows the TARDIS flying in a Matrix-style bullet time, along with Murray Gold’s Saturday matinee reinterpretation of the classic theme tune. A Google-map like zoom into London is followed by a day in the life of Rose Tyler, which clearly runs like hundreds before it – until she gets locked in the basement of the clothing store where she works. As things go bump in the night, a shop mannequin appears to come to life, followed by another, then another. As Rose pretends to be calm and in control, shouting to colleagues to stop their joking around, she finds herself cornered, and, just as the mannequins prepare to attack, she’s grabbed by the hand by a Northern English man in black jacket, T-shirt and trousers, who grins and says “run!”

As they escape in an elevator, lightning-fast dialogue proves that Rose can recover quickly, the stranger can keep up with her and there’s already been a death in the story. As he explains as he’s about to blow up the building to destroy the living plastic beings, he tells her, “I might well die in the process, but don’t worry about me. No, you go on. Go on, go and have your lovely beans on toast. And don’t tell anyone about this because if you do, you’ll get them killed.” He pushes her out a door and slams it behind her, reopening it to say, “I’m the Doctor, by the way. What’s your name?” Responding to her shocked one-word answer, he continues, “Nice to meet you, Rose. Run for your life!”

What follows is a relatively standard-fare Time Lord adventure, but with a far bigger budget than any adventure before it. Faced with the threat of a previously encountered alien race called the Autons, who are being used in an attempt to take over the world, the Doctor sets out to save his favorite planet once again. There’s some comedy relief when Rose’s mom tries to flirt with the Doctor and when he’s attacked by a disembodied Autonomies arm while Rose thinks he’s just playing around. He comments on his ears, demonstrating that he’s only recently regenerated. He addresses the never-ending query of his full name by saying he’s “just ‘the Doctor.'”

Then, in a classic piece of monologue, we discover how the new Doctor feels: “It’s like when you were a kid, the first time they tell you the world’s turning, and you can’t quite believe it because it looks like everything’s standing still. I can feel it. The turn of the Earth. … We’re falling through space, you and me, clinging to the skin of this tiny little world and if we let go –– that’s who I am. Now forget me, Rose Tyler.”

By the end of the show, Rose has discovered the TARDIS is bigger on the inside; we’ve discovered that the Doctor tried to save everyone in the Time War but couldn’t (later retconned to include the War Doctor as his previous regeneration) and that, ultimately, he’s a lonely character who needs the companionship of someone with a spark of spirit – and, in the most direct manner ever – needs love too.

The title “Rose” could refer to the new character or the show’s return, and with so much riding on it, the episode couldn’t possibly fulfill all the things expected of it. It was, however, sufficiently satisfying for the old guar and sufficiently engaging for the following generations to keep most of them watching.

“It’s still fun and light and funny … but it’s still a drama,” Davies noted. “It’s not light entertainment. Casting Chris and then Billie was a double whammy. I still can’t believe we pulled it off. It single-handedly changed its image. You know Episode One will go out and 15 reviews will say, ‘I preferred it when there were wobbly sets,’ but I don’t think that will be there for the younger audience.”

While relatively memorable, the Autons weren’t most fans’ first choice of supreme evil in the Who universe. It seemed, though, that Russell had thought of that. While his show was dripping with Easter eggs for fans who’d waited years for it to come back, he understood that too many bells and whistles on opening night could only lead to disappointment later. Doctor Who was renewed before the first season had finished airing, and because Davies had had so much time to come up with a four-season campaign, he was able to comfortably secured the franchise’s future for more than a decade and a half. “When I was eight, walking home from school … I always used to think, ‘I could turn round the corner and the TARDIS would be there – and I would run inside and I would fight alongside the Doctor,’” Davies recalled. “It’s the touchstone: This could happen to you.”

Watch Rose in ‘Doctor Who’

He had to carry on without Eccleston, who found himself at odds with some of the production team. In a public drama that the BBC later admitted could have been handled better, the news of his departure came out just days after “Rose” aired, risking the audience’s commitment to a Doctor they already knew was going to be gone.

“My relationship with my three immediate superiors – the showrunner, the producer and co-producer – broke down irreparably during the first block of filming and it never recovered,” Eccleston admitted in 2018. “They lost trust in me, and I lost faith and trust and belief in them. … Some of my anger about the situation came from my own insecurity. They employed somebody who was not a natural light comedian. Billie, who we know was and is brilliant, was very, very nervous and very, very inexperienced. So, you had that, and then you had me. Very, very experienced, possibly the most experienced on it but out of my comfort zone.”

He later told The Guardian that as a result he made enemies in the U.K. and couldn’t find work. “I gave them a hit show and I left with dignity, and then they put me on a blacklist,” he explained. “I was carrying my own insecurities, as it was something I had never done before, and then I was abandoned, vilified in the tabloid press and blacklisted. I was told by my agent at the time, ‘The BBC regime is against you. You’re going to have to get out of the country and wait for regime change.’”

Eccleston noted in 2016 that “there’s always regret. I watched it back and I thought, ‘Okay, next time, don’t do this, do that.’ You know, calibrate the performance. It was kind of tragic for me that I didn’t play him for longer. He’s a beautiful character and I have a great deal of professional pride. … Had I done a second season, there would have been a marked improvement in my performance. I was learning new skills, in terms of playing light comedy. I was not known for light comedy and, again, production did not allow for that.”