The ‘Wild and Crazy Guys’ Debut on ‘SNL’ 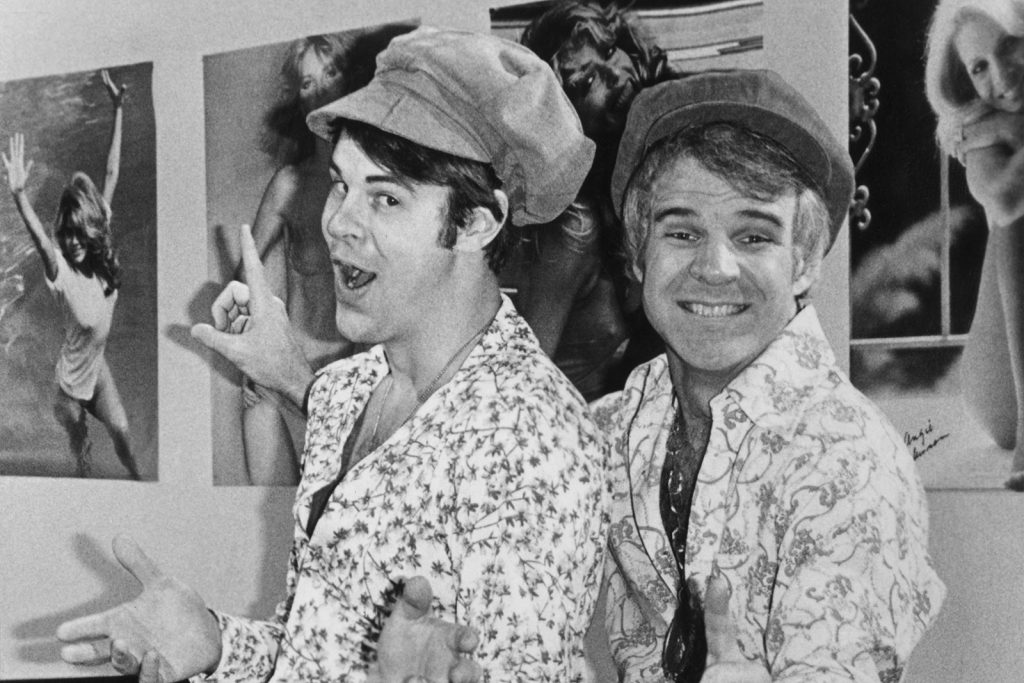 An enduring Saturday Night Live recurring sketch comes together with a mysterious alchemy.

Dan Aykroyd and Steve Martin’s Festrunk Brothers are an example of a premise that combined the uniquely disparate talents of three SNL all-star talents (Aykroyd, Martin, and writer Marilyn Suzanne Miller) into a sketch that spawned countless imitations both inside and outside the show, becoming a cultural touchstone in the process. Looking back at the swinging Czech brothers’ first appearance on the Season 3 premiere back on September 24th, 1977, however, is to see how some of the most beloved character and sketches take some time to settle into the audience’s consciousness.

In that sketch, recent immigrants to the Big Apple Jorge (Martin) and Yortuk (Aykroyd) Festrunk put the moves on a pair of unsuspecting neighbors (Jane Curtin and Gilda Radner) in their apartment building’s basement rec room. Being only recently arrived in America after “fleeing from the tanks” in the Russian invasion of their homeland, the siblings approach their romantic quarries with heads packed full of tales of Western decadence and loose American morals, their blunt and mangled come-ons a second-hand approximation of swingers’ lingo and hip threads. While the women are more than patient, Jane even answering Jorge’s question about her weight, the brothers are happily fobbed off with a promised rendezvous, right in the middle of the Lincoln Tunnel.

A sketch about men’s sexist and entitled pursuit of uninterested and unsuspecting women can go any number of ways, of course, from the insightful to the coarse. But in this initial appearance, it was the coming together of three individual comedy currents that sowed the seeds for the Festrunks (or “The Wild and Crazy Guys,” as they became more commonly known) to spin off into the rarefied air of recurring SNL characters who never quite outstayed their welcome.

The initial idea was Aykroyd’s, with his facility with accents and precisely worded weirdness imagining a forced émigré from the Soviet Bloc as a cluelessly confident fish out of water. With everyone’s favorite host Martin scheduled to kick of Season 3, Aykroyd, taking note of Martin’s own “Wild and Crazy Guy” foreign character from the stand-up’s wildly popular stage act, approached Martin with the idea of a team-up. Developing the idea, Martin and Aykroyd conjured up a specific sort of new citizen, men whose previous success and prosperity in the closed-off world behind the Iron Curtain is stripped away upon their flight to a freer new world, but whose overconfidence in their own allure is only exacerbated by the implied promise that both freedom and free love are theirs for the taking.

Still, needing a woman’s point of view to ground this disastrous brothers’ act in 70’s dating culture, the pair turned to Miller, whose subtly evocative sketches were rightly revered in the SNL writers room. As Miller recounts in the SNL oral history by Tom Shales and James Andrew Miller, Live From New York, Aykroyd asked Miller, “Okay, you know those guys that come over and paw you and they used to be an engineer in Poland and now they drive a Camaro?” Miller, recognizing the satirical angle on this front of the battle of the sexes, replied with an excited, “Yes!” And thus the Festrunk Brothers made their TV debut at the top of the third season premiere.

It’s a funny sketch, although the audience response begins at bewilderment and merely simmers along in intermittent chuckles. Martin and Aykroyd’s scrambled jive patter is in place (“Not to be polite, but what are your names?,” Yortuk begins), but neither actor’s characterizations were as confident and firm as they’d become. Aykroyd, ever a master of relentless staccato wordplay, fares better in this first outing, his accent a more clipped and accurate-sounding approximation of the brothers’ Czech dialect. Martin, meanwhile, is uncharacteristically subdued, with even the soon-to-be guaranteed catchphrase “We are two wild and crazy guys” delivered more like a question than the statement of self-branding it would become. (We also find out that the brothers used to be brain surgeons in their homeland, an improbability future sketches ignore.)

Still, Aykroyd’s Yortuk rattles off intensely complicated come-on nonsense with aplomb, plunging ahead with small talk with the delirious mouthful, “What can you say to us that we would enjoy talking about to you now here and now in this swinging way with us?” Martin shines best in a single physical bit where, after taking over the women’s ping-pong game with promises of irresistible tabletop prowess, he returns Akroyd’s serve with a mighty overhand smash that crushes the ball flat on the table in front of him. (He misses the second shot at sketch’s end, but it’s still pretty funny.)

Going forward, the Festrunks would become an institution until Aykroyd’s 1979 exit, with the perpetually on-the-make duo’s next appearance (on Martin’s January 1978 hosting stint) ramping up the brothers’ eccentricities and Martin and Aykroyd filling out their characterizations. The audience pop is initially muted once more, although Martin quickly wins the crowd over by introducing his version of the brothers’ signature walk, an exaggerated, shimmying glide that is the Festrunk’s idealized womanizer’s gait. Aykroyd and Martin had developed also a more lived-in interplay where they brothers bounce misheard Americanisms (“That’s your problem!” “You and what army?”) off each other with exuberantly reciprocated glee. From this expanded visualization of their outsiders’ starry-eyed view of American excess, their repeated excited references to women’s “big American breasts” emerges like an encapsulation of all their hopes and dreams.

But the greatest addition to the formula is Garrett Morris as Cliff, the one neighbor seemingly charmed enough by the brothers guileless adoption of “swinging American” culture to hang out with them. Morris was never more charismatic or natural on Saturday Night Live than when the amused but empathetic Cliff (clearly an actually successful player on the singles scene) attempts to counsel and caution his uncomprehending pals as to the pitfalls of the dating game and the shortfalls in their approach. He also serves to humanize the potentially irritating Festrunks by assuring us by proxy that, underneath all their half-understood come-ons and half-buttoned silk shirts, the brothers are more harmless than predatory. (And that their tone-deaf but appreciative greeting, “Slap my hand, Black soul man!,” is just another example of the Czech immigrants not quite getting America as much as they think.)

By the time the Festrunks entered their swinging bachelor pad (complete with posters of all-American icons of sexiness JFK and Lynda Carter’s Wonder Woman), in their third Season 3 appearance, Martin and Aykroyd were greeted with the swelling adoration of a crowd primed for a guaranteed good time. It’s here, too, that the brothers actually get to improbably win, Cliff’s understandable skepticism about the brothers convoluted tale of the two American supermodels who’d promised to come over for a one-night stand (“They have to stop by the Statue of Liberty to pick up their birth control devices,” Yortuk explains) turning out to be 100 percent true. Is it unlikely that Larraine Newman and Gilda Radner’s preening models would fall for a couple of buffoonishly blatant pick-up artists as Jorge and Yortuk? Well, it was NYC in the ‘70s. As the ’70s faded, so did the Festrunks, with only one more appearance in Season 4.

After another 15 year break, Martin and Aykroyd squeezed into the polyester and dodgy accent work for presumably the last time, showing up in a Season 38 sketch, vying with Andy Samberg and host Justin Timberlake’s “Dick in a Box” crooners and a confused Bobby Moynihan on a Dating Game-style game show. It was a little unseemly for the then sixty-something Aykroyd and Martin to be doing the same, very old schtick (and, oddly, Aykroyd seems to have forgotten which actor plays which brother). Regardless, they were both clearly having a ball, and the audience popped just as hard as they ever did for two of Saturday Night Live’s most improbably endearing—and enduring—characters.

‘Saturday Night Live”s Original Cast: Where Are They Now?

What’s happened since that first episode in October 1975?