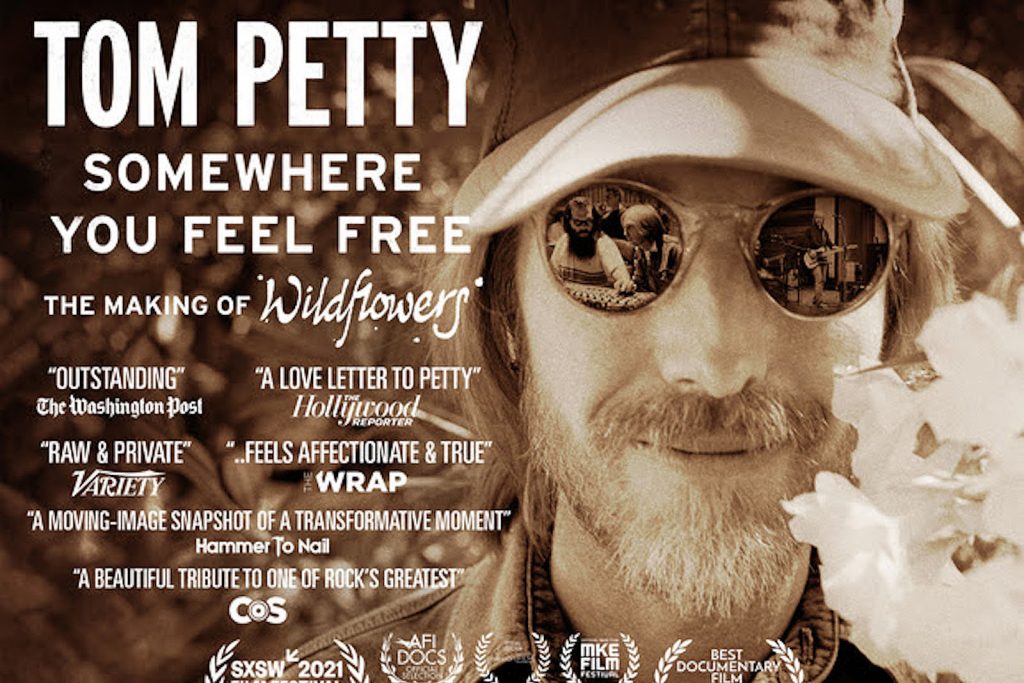 The making of Tom Petty‘s 1994 solo album Wildflowers has become something of a legend over the years.

Rick Rubin was brought in to coproduce, Heartbreakers Mike Campbell and Benmont Tench helped out and a new drummer, Steve Ferrone, joined the sessions and stayed in the band until Petty’s death in 2017. Dozens of tracks were written — some made it onto the album, some ended up on 1996’s She’s the One soundtrack and some sat on the shelf until 2020’s Wildflowers: All the Rest box set.

Those are the stats behind the album. But there was more put into the record than that. Wildflowers took on new, raw emotions, vulnerability and poignancy as it was created. Faced with a crumbling marriage and substance-abuse issue, Petty was unsure of his future.

A new movie, Tom Petty, Somewhere You Feel Free: The Making of Wildflowers, shows the artist at a crossroads as he channels his confusion, pain and hope into songs. Directed by veteran music documentarian Mary Wharton ( Sam Cooke: Legend, Joan Baez: How Sweet the Sound, Jimmy Carter: Rock and Roll President) the 90-minute film incorporates never-before-seen footage from the Wildflowers sessions, along with new interviews with Rubin, Campbell, Tench, Ferrone and others. Described as a “love letter to Petty,” Somewhere You Feel Free revisits the most fruitful, and haunting, period of Petty’s career through the lens of those who were there.

Wharton talks about the development of the movie, which premieres in theaters tomorrow via Trafalgar Releasing on what would have been Petty’s 71st birthday, with UCR. The film will be available for free on Petty’s YouTube channel later this year.

You first met Tom Petty back in 1994 when you were a young producer working for VH1 and you cut an interview that featured him discussing the making of Wildflowers. What was your impression of him then?
I was completely charmed by him. Obviously, I was young and just starting my career, and he was certainly not the first celebrity I had met, but the first one of my kind of rock ‘n’ roll idols. … He was so charming and gracious, and struck me as just a really lovely southern gentleman. He was so smart and articulate and well-spoken. And that interview that he did that day, we used a number of pieces from that interview in the film that we were able to license, and he’s just really thoughtful and lovely in that interview. I’ll always treasure that memory of meeting him that day.

Flash-forward many years, and you get a call, mid-pandemic, from Petty’s daughter, Adria, who says she’s got all this studio footage from the Wildflowers sessions. What were those initial conversations like?
It was really pretty open, quite honestly. I think one of the most important things in documentary filmmaking is to really listen to the material and let the film be what it needs to be. … If you’re making a documentary, you can’t control it as much as you can control a narrative, scripted film, right? So a lot of times it feels to me like you’re corralling wild horses, or herding cats, depending on the case where you’re just sort of, like, there’s this thing that’s out of your control and and all you can do is try to guide it into a direction that makes sense and react to the material. I think that Adria was certainly open to, from the beginning, very creatively open to whatever seemed best. … It was an amazing phone call to get, because it was so early on in the pandemic that I didn’t even know how, or when, I was going to be able to work again, and here was this project that was pretty much archival-based. So it was perfect, it was something that I could just jump right into.

Did the project ever seem daunting to you? This is such a beloved album for so many people. Did you ever think, “Wow, I better nail this”?
Yeah, I mean, it’s so daunting. Always, it was daunting, because it’s an incredible album that is surrounded by the mythology — all the tracks that Tom always wanted to release, but he himself was kind of daunted. There was a sort of haunted quality to that material to him, because it was so strong and so powerful. And then to take on a film about an artist like Tom Petty, who was a perfectionist in everything that he did, certainly the specter of that, and the incredibly high standards that he held himself to, for me, it was a scary thing to tackle, to try to hold myself to those same high standards.

Watch a Trailer for ‘Tom Petty, Somewhere You Feel Free: The Making of Wildflowers’

You received four hours of footage from Adria. How did you figure out what to include in the film and what to cut?
To say there’s four hours of film is somewhat misleading, because there’s a lot of times where the cameras are shooting the floor or the ceiling. I think, too, because they were filming it with the intention of putting out this short-form electronic press kit, the cameras are stopping and starting in the middle of a song, where you’re just like, ‘Oh, no, why didn’t you keep rolling?’ But also they were shooting on 16mm, which, at the time, came in 10-minute rolls. So you can’t just roll for hours on it. A lot of it was dictated by what was good and what we could find sound for, because … either the reels were not properly organized afterwards or properly labeled. And a lot of times we didn’t have sound for much of the film. … We’re lucky that my editor, Mari Keiko Gonzalez, is an excellent lip reader, because she was able to see like, ‘Oh, Tom’s playing guitar here, and I can sort of make out the words from reading his lips,’ and then go and listen and find that song in the sound reels.

The contemporary interviews in the film — Rick Rubin, Benmont Tench, Mike Campbell and so on — were shot on film, as opposed to digital, so it matched up with the original 16mm footage. Was that an obvious choice to you?
No. [Laughs] Before I had officially come on to the project, Adria had been able to wrangle Rick Rubin and Ben and Mike to be together in the same place at the same time to shoot that initial conversation … and she chose to shoot it on black-and-white film. And when she told me she was doing that, I was like, ‘Wow, that’s so badass. I love it.’ That was the reason. Once one was shot on film, it just made sense that we needed to do them all. And I was excited to do that, because I love the way that film looks. It definitely presented its own challenges, because there were certain pieces that we had to reshoot. The film didn’t come out for one reason or another, we had equipment errors — there’s things inherently risky in shooting film that I was, like, ‘Now I see why no one makes documentaries on film anymore.’ …  Visually, I love that we stay in that world of film, because it just adds to the feeling of [the film being] like this little time capsule that’s been hidden away in a vault somewhere and meant to be opened in 2021.

You also chose to, for most of the film, use sound-bites from Tom Petty that were from the Wildflowers era specifically, not pulling from more recent interviews.
It was something that we realized very early on in the process. And I remember I started trying to pull stuff from — there were many lengthy interviews that were done with Tom for the Peter Bogdanovich film [Tom Petty and the Heartbreakers: Runnin’ Down a Dream] in 2007. And we were listening to some of those, and Mari, the editor, just immediately said, ‘It doesn’t feel right.’ Because his voice sounds so different. … But it was an interesting thing that it wasn’t just the sound quality of his voice — it gets a little deeper, perhaps a little rougher from many years of singing and smoking, that whole thing which changes the sound of a person’s voice — but it was also a sense of perspective. When he was talking about things in the moment in the present tense, it helped, again, with this kind of feeling of the time capsule, of the bubble. We wanted to stay in that wonderful moment and not leave it. And when he would speak with the perspective of an older man, looking back and talking about things in the past, it just took us out of it.

Do you have a favorite moment in the film?
I have to say that my favorite moment is when we play the song “Honeybee.” It starts sort of middle of the film where you really feel that he’s reaching this creative high point. And we started [with] a little piece of him with the band doing a super-bluesy acoustic version of the song in the studio. You can just feel the band falling into the pocket with the song and right when it sort of kicks in, then the camera cut out, and so then Mari got very creative, and she cut to the record version of the song, which is hard and rocking. And it brings it up a notch, and then cut to a live concert version that was filmed on the Wildflowers tour. And it’s just a total rocket, awesome live performance of the song. It combines all of the elements that we had to work with to illustrate the music, which was a little bit of the studio footage, a little bit of animation that we created, with this really talented animator, Blaze Brooks, and a little bit of the beautiful shot-on-16mm film concert footage from the time.

Do you have a favorite song on Wildflowers?
I think it’s “Wildflowers.” The message that “you belong somewhere you feel free,” really struck a nerve for me. I had always loved the song from hearing it when it first came out. But when I started really listening to it in a deeper way, because of this film, during the middle of the pandemic, it was so liberating for me, because here I was stuck in my house … and here was this little reminder that I could feel free wherever I was, if I just leaned into me and into my creativity. And that’s what he was singing about, he was giving himself permission to feel free creatively, to feel free in his life choices, to feel free in the way that he conducted his business. … Learning all of that sort of allowed me to give myself that permission. It was, like, in the middle of a sort of dark time in America and around the world, here I was with this little box of sunshine. And so it’ll always have special place in my heart.

He’s a rock ‘n’ roll rarity: an artist who was consistent until the very end.