Tommy Lee Gets Punched by Kid Rock at the MTV VMAs 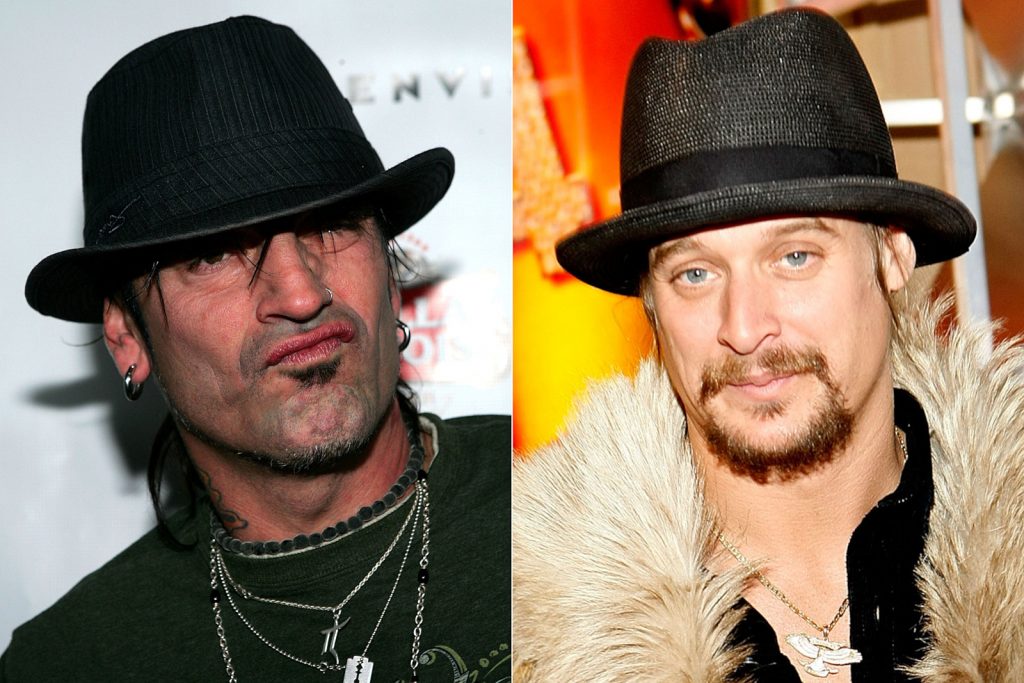 Two of rock’s most notorious personalities had to be separated by bodyguards when Motley Crue’s Tommy Lee and Kid Rock got into a fight on Sept. 9, 2007, at the MTV Video Music Awards.

Bad blood existed long before that night. Lee and Rock shared a common ex: Baywatch star Pamela Anderson. Lee was married to her from 1995-98, with the couple reportedly attempting to reconcile at various points after their divorce. Rock, meanwhile, was married to Anderson from July through December 2006.

The 2007 VMAs were held at the Palms in Las Vegas, and initially, Lee and Rock kept their distance from each other. Then Lee reportedly decided to hang out with rapper Sean “Diddy” Combs. Rock had been seated in the same area but was away at the time.

“From our vantage point it, looked like Tommy Lee went over to say hello to P. Diddy ’cause Kid Rock was out of his seat,” former MTV personality Carson Daly later told Today. “Kid Rock came back to his seat and all hell broke loose.”

Exact details varied from witness to witness, but most agreed that Lee said something that Rock did not appreciate. Rock reportedly slapped Lee once, then punched him in the face.

“It looked like Tommy Lee initiated it because Kid Rock was ignoring him,” rap producer Rich Nice told Today, “and Tommy Lee kind of antagonized him. Then when Tommy Lee stood up, it looked a little weird, like ‘Yo, what?’ When Tommy stands up is when Kid hit him the first time with a backhand and then Tommy Lee looked like he was trying to get at him to aggressively retaliate – and then Kid Rock hits Tommy Lee again.”

In a subsequent post on his website, Lee said he was “minding my own biz [when] I get a tap on the shoulder from Kid Pebble. I stand up and embrace him with a semi hug and say ‘Hey dude. What up?’ He punches me in the face – well, if ya wanna call it that. More like a bitch slap! Wuss!”

Lee said he went to “knock this jealous no-career-havin’ country bumpkin the F out, and before I can have a meeting with my fist and his ugly-ass mug, security guards – not mine – at the Palms grab me and haul my ass outta the award show, threatening me that if I move they’ll break my arm. Yeah, whatever!”

Rock was cited for misdemeanor battery as a result of the skirmish. In a radio interview soon afterward, he declared that the feud with Lee had been going on for five years.

“I did what any man would do, any man across the country, across the world would do,” Rock said. “It kills me just to be associated with, to have my name in a sentence with him. It honestly destroys me.”

Rock added that the “last contact I had with him was when me and Pam were going through our divorce. He picked up her Blackberry and started emailing me a lot of horrendous things. It was extremely disrespectful.”

In the end, however, Rock insisted that their fight “was unavoidable. I had to do what I had to do because this was a long time coming. You know, I came back from the bathroom and he was sitting right there. It was even more disrespectful after everything he’s said. I was like, ‘That’s enough. That’s it.’”

Shortly after their VMA rumble grabbed headlines, Lee and Rock were offered $1 million to participate in a celebrity boxing match. They declined.

See dozens of photos of one of rock’s most famous couples.