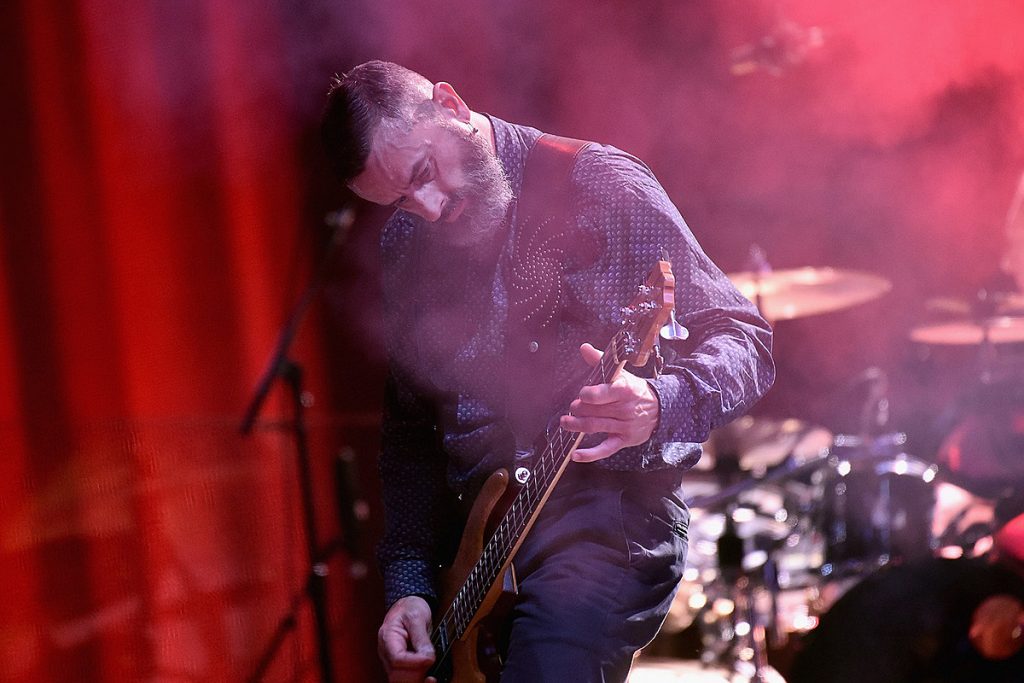 Tool bassist Justin Chancellor explained the Spinal Tap-like struggle he has with his favorite instrument.

Just like the scene from the movie This Is Spinal Tap where Nigel Tufnel’s guitar starts to pick up radio signals, Chancellor said he has to be careful to avoid FM transmissions while performing.

“I don’t know what I did to my main bass,” he told Music Radar in a recent interview. “I’ve poured makeup into it, I’ve bashed it around – and we’ve gone in the back and cleaned it up. … It sounds amazing and one of a kind at this point, but it picks up a really decent radio signal if you’re anywhere near an antenna.”

Agreeing that it was “exactly” like the scene from the 1984 movie, Chancellor noted he has “to stand in one particular position in order not to pick it up, and if you put a distortion pedal on, forget it.”

His bass technician came up with the idea of having the original manufacturer create a more modern, lightweight version of the bass, though it hasn’t been delivered yet. “They put a lot of extra shielding in the electronics for those moments when I’m getting 101.4FM or Top 20 hits through my bass,” Chancellor said. “I’m really looking forward to picking it up.”

He went on to say that he was trying to become “a little more sensitive” with his playing. “I’m ashamed to say it, but I watch YouTube videos of our live shows, wondering if it actually sounded the way it sounded when I was playing it, and the consistency thing I see is that you can feel the anxiety and the tension,” he explained. “It’s over-aggressive a lot of the time. If you can really try to kiss the strings, there’s a lot more music in it.”

Chancellor admitted he still suffers stage fright, and cited the example of a recent show where Tool played two tracks from their latest album, Fear Inoculum, which they had performed only twice before during rehearsals.

“That was pretty terrifying, to completely give up and surrender and be completely vulnerable with everyone staring at us through this long, protracted intro,” he said. “But if you don’t take it seriously and you don’t think of the enormity of what’s about to go down, then you might get caught with your pants down. You could be taken by surprise, or your muscles might seize up because you’re not really prepared. You have to take all that into consideration and appreciate the moment.”