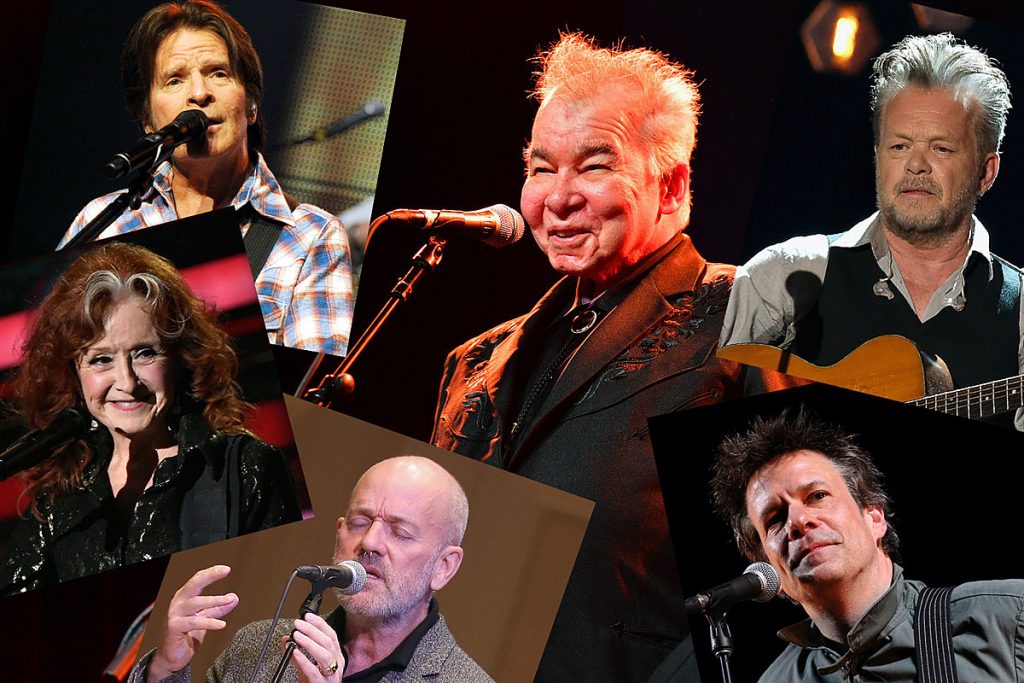 But the Rock & Roll Hall of Fame nominee has plenty of famous fans outside of country music too, as our list of Top 10 John Prine Rock Cover Songs shows. In fact, this list really only scratches the surface for an artist who has also been covered by a diverse group that includes Joan Baez, the Flying Burrito Brothers, Carly Simon, Jason Isbell, Susan Tedeschi and 10,000 Maniacs, among many others.

Some Prine covers have become signature moments – our No. 1 cover is probably better known than his original take – while others have stirred controversy: Cash memorably replaced a lyric, changing “Jesus Christ died for nothing, I suppose” to “Daddy must have seen a lot back then, I suppose” in an ’80s-era update of “Sam Stone.”

The easygoing Prine took it all in stride. “If it hadn’t have been Johnny Cash,” he told Rolling Stone in 2017, “I would’ve said, ‘Are you nuts?'” As you’ll see on the below list, it wasn’t the last time a well-known artist did something surprising with one of his tunes.

Kooper’s final solo recording before taking a three-year sabbatical to work with Lynryd Skynyrd included a heartfelt cover of Prine’s “Sam Stone.” He didn’t change a key lyric, as Johnny Cash did a decade and a half later, but that didn’t mean Kooper left this dark drug-addicted veteran’s tale alone. Instead, he adorned it with a noodling ARP synthesizer. Kooper wouldn’t release an album under his own name again until 1976’s Act Like Nothing’s Wrong. In between, the stop-gap compilation Al’s Big Deal: Unclaimed Freight also included this John Prine cover.

Most people associate the Spencer Davis Group with their mid-’60s incarnation featuring the young Steve Winwood. But Davis has continued the group in a series of configurations since the split. Fast forward a couple of decades, and he could be found enlisting guest stars like Dusty Springfield, Booker T. Jones and Flo and Eddie for a solo album that included this rollicking, George Harrison-esque take on Prine’s “Love Is on a Roll.” Crossfire began a long association with producer, engineer, guitarist and songwriter Ed Tree.

Criticism of this Prine tribute project rightly noted a hushed reverence for the subject matter. It’s perhaps understandable, considering Broken Hearts & Dirty Windows deals mostly with deep cuts – and they’re still better than many artists’ biggest hits. “Daddy’s Little Pumpkin” breaks the comfy, almost sycophantic mold, as the Drive-By Truckers turn what was originally a deceptively cutting acoustic number from The Missing Years into a gas-mashing rattle-trap of a tune.

Manfred Mann‘s Earth Band strap the closing song from Side One of John Prine’s self-titled debut to a rocket. (The famously curmudgeonly Robert Christgau even said their sizzling cover of “‘Pretty Good’ is pretty great.”) Yet, for some reason, it was left off the U.K. version of the album, which also had a different title. Messin’ included Prine’s prison-protest song called “Black and Blue” instead. Both finally made their way onto the same track listing on a remastered reissue from 1998.

This was listed as a collaboration on the original liner notes, but John Mellencamp later reportedly admitted, “I can’t take credit – John Prine wrote most of that song.” Something clicked. They went on to co-write “Take a Look at My Heart,” which appeared with a Bruce Springsteen vocal on 1991’s The Missing Years. “I know the record companies had no idea what to do with John Prine. ‘He’s not country; he’s not rock. What are we gonna do?'” Mellencamp marveled at the 2017 PEN awards. “And he said, ‘To hell with it. I’m gonna do what I’m gonna do.’ And he did.”

R.E.M. declined to tour in support of 1991’s Out of Time, though they did play a pair of shows on March 14-15, 1991, at the Borderline in London under the very strange fake band name Bingo Hand Job. These appearances, which were widely bootlegged, included R.E.M.’s delicately conveyed acoustic version of “Hello in There.” The second night eventually saw official release, but 2019’s Record Store Day two-LP offering – titled Live at the Borderline 1991 – didn’t include the John Prine cover.

My Morning Jacket approached “All the Best,” a breakup song from 1991’s Lost Dogs and Mixed Blessings, like a backwoods fever dream – complete with Jim James’ diaphanous falsetto and a swooning Carl Broemel guitar. James would go on to perform with Prine on the Late Show With David Letterman in 2015 and at the Newport Folk Festival two years later, deepening a professional bond into something more personal. When James heard Prine had been stricken with the novel coronavirus COVID-19, he returned for an emotional new take on “All the Best.”

He may have released this under the pretty-dumb pseudonym Grandpaboy, but this lo-fi take on Prine’s “Souvenirs” is pure Paul Westerberg. In fact, his version is so boozy, shambolic and slightly unhinged that it comes off like grand theft. Recorded in Westerberg’s basement studio (and sounding very much like it), Westerberg’s hangdog vocal, stark, echoing production style and crying-then-grinding guitar simply subsume any trace of Prine. The results sound like one of those scrappy covers his old band would play onstage – but in a good way.

This undoubtedly begins as the most country-sounding song on our list of Top 10 John Prine Rock Cover Songs. Then John Fogerty opens his mouth. “Paradise” quickly turns into a braying, bayou-country lament, with far more in common with Creedence Clearwater Revival than Randy Travis (who also covered this John Prine song, by the way). Fogerty can’t help sounding like that – as evidenced by an infamous lawsuit. It doesn’t hurt that Prine actually referenced a “green river.”

The album stalled at No. 80, as Bonnie Raitt struggled to find early-career traction. It took a late-’80s renaissance to finally bring the wider fame she so richly deserved. Still, Streetlights provided one important career milestone: a signature song. Prine wrote “Angel From Montgomery” from a woman’s perspective, and Raitt completely inhabited it. Later, she discovered it had a more universal message. “I’m at that age where parents start going and people are sick,” Raitt said, introducing the song while onstage in 2012. “I don’t take anything for granted anymore.”