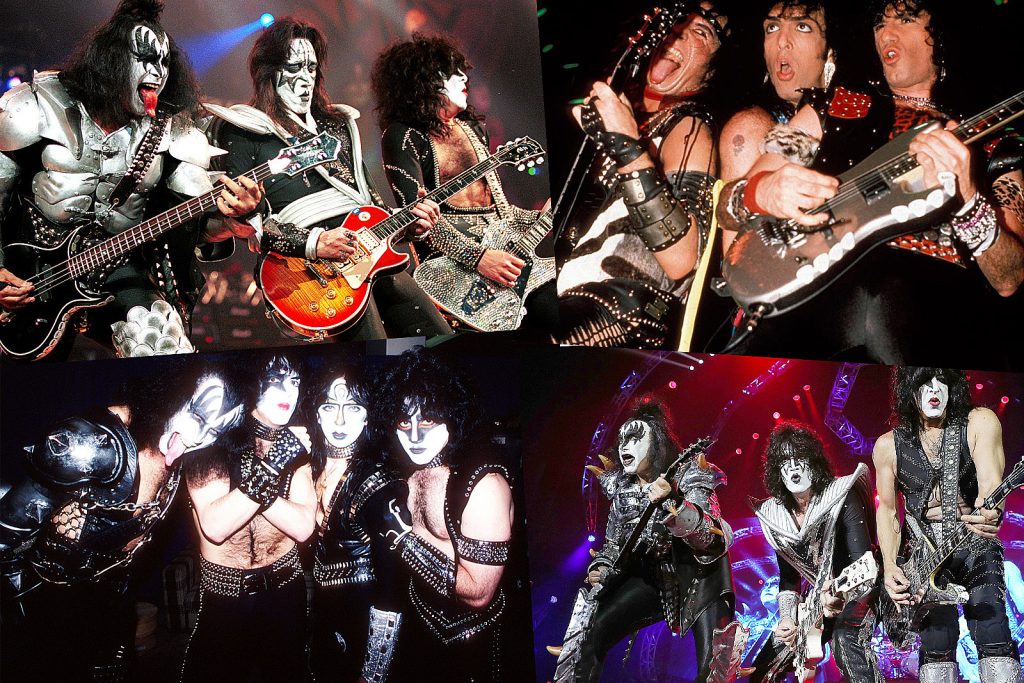 You could build a pretty great Kiss concert out of songs the group has never played live.

The self-professed “hottest band in the land” carried over most of the songs early in their career, performing all but four of the 58 tracks found on their first six albums at least once onstage. (According to Setlist.fm, the never-played songs are “See You in Your Dreams” and “Baby Driver” from Rock and Roll Over, and “Then She Kissed Me” and “Got Love for Sale” from Love Gun. And they’ve never played “Kissin’ Time,” which was added to 1974’s Kiss against their wishes. )

But as time went on and their shows became packed with increasing amounts of must-play-every-night” favorites, Gene Simmons, Paul Stanley and company began leaving more and more songs from each new album off the set lists. It’s hard to argue with their choices, but that doesn’t mean we wouldn’t love to hear them perform the below Top 10 Songs Kiss Never Played Live onstage before calling it a career.

For the encore, they could include songs they’ve played only once or twice, like Animalize‘s “Get All You Could Take” and Kiss Kruise favorites “I” and “The Oath.”

Carnival of Souls was the last album of Kiss’ non-makeup era, recorded just before their original lineup reunited in 1996. It found Simmons, Stanley, Bruce Kulick and Eric Singer exploring the dropped tunings, sludgy tempos and more serious subject matter of the early ’90s grunge movement. It wasn’t always the most natural fit, but there were several songs that clicked, most notably Simmons’ pummeling “In My Head.”

Although he’d been singing songs like “Black Diamond” and “Young and Wasted” in concert, it took almost a decade for Eric Carr to perform lead-vocal duties on a Kiss record. He made the best of his opportunity with the triumphant “Little Caesar,” a high point of the often-muddled Hot in the Shade. But Carr’s 1991 death also made it his farewell to the band. Good luck finding a true Kiss fan who doesn’t get emotional when listening to him wail over the song’s rousing “whoa ohh ohh” gang-vocal finale.

For the most part, Psycho Circus is a Kiss reunion album in name only. Although Peter Criss and Ace Frehley appear on the album cover, they actually play on only two songs. Frehley’s excellent “Into the Void” was regularly performed on the accompanying tour, but “You Wanted the Best” may have been an even better choice in concert. Named after the band’s nightly introduction speech (“You wanted the best, you got the best! The hottest band in the world: Kiss!“), the song is basically group therapy set to music, as the foursome takes turns airing old grievances, ultimately deciding to put their differences aside for the fans.

“I think Unmasked is a pretty crappy album,” Paul Stanley declared in the book Kiss: Behind the Mask. “It’s wimpy.” The Starchild is wrong: The album is a terrific showcase for his pop smarts, and the disco-era production is a perfect match for the huge choruses he delivers on songs such as “What Makes the World Go Round.”

Ace Frehley knew Kiss were making a big mistake by recording a medieval-themed concept album. So, he basically refused to show up for work, instead mailing in tapes with his contributions recorded at his home studio. “Dark Light” is Frehley’s solitary Elder showcase; it also turned out to be his farewell to Kiss, since he quit the band soon after. Nearly a quarter of the four-minute song is devoted to an extended guitar solo, as if to remind fans what they’d be missing. Frehley has played the song at solo shows, but it’s never appeared during a Kiss concert.

Ace Frehley didn’t sing lead on a Kiss song until “Shock Me” from their sixth album Love Gun, but he quickly made up for lost time. When the band simultaneously released solo albums in 1978, his cover of “New York Groove” was by far the biggest hit. When the band recorded a side of new studio material for Alive II later that year, he contributed another winner with “Rocket Ride.” But when the band returned to the road, there was only so much microphone time for Frehley, so the song wasn’t played onstage until he toured as a solo artist.

“Saint and Sinner” is a breakup song, but Simmons’ opening lines seem to reference Frehley’s departure from Kiss: “Getting off this carousel / You can do as you please / You can go to hell / You put my back against the wall.” Later, he adds a kicker: “Without you, it’s aces high.” Regardless of the song’s motivations, Simmons’ Demon persona was at full power for the first time in years throughout 1982’s Creatures of the Night. On songs like “Rock and Roll Hell,” he achieves a level of dramatic storytelling missing from the previous year’s Music From ‘The Elder.’

“Tomorrow” is one of the most infectious, uplifting songs Stanley has ever written. His bandmates contribute gorgeous vocal counterpoint s during the climactic part of the chorus, and Frehley’s soloing once again proves to be the perfect grounding element for this particular side of Kiss’ music.

After the commercial failure of Music From ‘The Elder,‘ Kiss were rushed back into the studio to record some back-to-basics songs for an overseas greatest-hits collection. With help from producer Michael James Jackson, who would go on to helm the Creatures of the Night and Lick it Up comeback albums, the band delivered four winners. None of the Killers tracks were ever played live, which is a particular shame in the case of “Down on Your Knees,” a perfect show opener featuring a powerful performance by new drummer Eric Carr.

Asylum is an underrated album, remembered mostly for the glammed-up hit single “Tears Are Falling.” But new recruit Bruce Kulick helped Kiss deliver some fluff-free hard rock in songs that came closer to the spirit of the band’s grittier, riff-based ’70s heyday than almost all of its ’80s output. The “Black Dog”-style “Radar for Love” is a great example, with Stanley showing off his vocal range between and over the band’s dramatic stops and starts. It would have been fun to watch Kiss tackle the song’s almost entirely instrumental second half – which features Kulick going wild with about three songs’ worth of riffs and solos – in front of an audience.