‘Tremors’ Takes Its Place as a B-Movie Classic 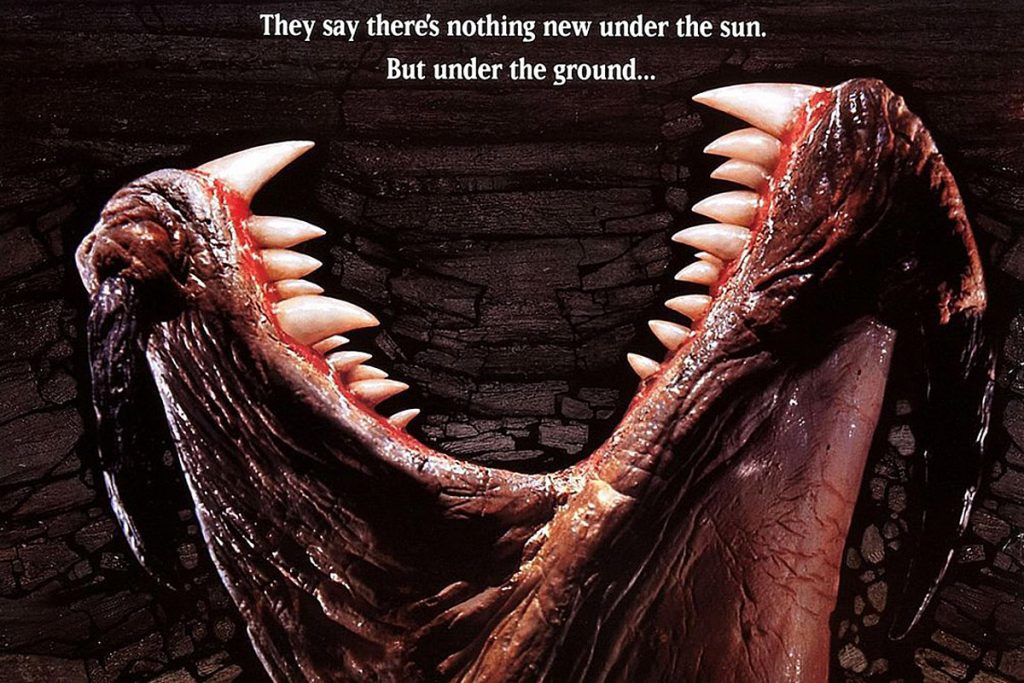 Should Tremors, released on Jan. 19, 1990, be celebrated because it helped rejuvenate the glorious tradition of B-movie monster pictures from the ’50s? Or because it reflects so perfectly the strange career of Kevin Bacon, an actor of leading-man talents who has spent most of his life in either small films or secondary roles? Or because it was the epitome of a VHS cult classic, a movie that did only moderately well in theaters but exploded in popularity once it reached video stores, in large part because of its ridiculous premise? All three are worthwhile reasons to remember the movie, but none of them should overshadow the joys of its charm, silliness and pure watchability.

The movie opens with two handymen, Val (Bacon) and Earl (Fred Ward) stuck in a series of dead-end jobs like mending fences and emptying septic tanks in the tiny rural town of Perfection, Nev. On the day they finally make the decision to leave this dreary life behind forever, strange things begin to happen. They find the body of one of their neighbors lodged high up in a utility tower, as if he had been chased there by something that wouldn’t let him come down. Another neighbor is killed as well, along with his entire flock of sheep. And a utility crew doing work near the only road out of Perfection disappears, leaving behind only bloody helmets and a rockslide blocking the road as clues to what happened.

Eventually, Val and Earl figure out that this havoc is being caused by a massive underground creature that moves through the dirt like a shark through water and has long, fanged tentacles reaching out of its mouth. Their first thought on discovering this monster – and then accidentally managing to kill it – is how much money they’re going to make off it. But then Rhonda (Finn Carter), a geologist doing field work in the area, tells them that her seismic readings indicate that there are actually three more of the monsters, all of them heading for the town itself.

The movie then becomes something of a siege film, with survival for Perfection’s few residents looking increasingly unlikely. Perfectly cast, these residents include Bobby Jacoby (the stage name of the actor-turned poker player Robert Jayne) as an annoying teenager, Victor Wong as the proprietor of the local general store, and Reba McEntire and Michael Gross as a survivalist couple infuriated by the fact that the bunker they’ve built to protect themselves from the apocalypse is of no use at all against underground monsters who can smash through concrete.

After a few buildings have been knocked down and some townspeople eaten, the survivors of the assault band together and use a bulldozer pulling a semi trailer to make a break for the hard granite of the nearby mountains, where there’s no dirt for the monsters to tunnel through. But the monsters have other plans, and in the end it’s up to Val and Earl to save the day.

A large part of the enjoyment of the film comes from the breezy facility with which this is all handled. The “horror-comedy” has become a staple of modern cinema, but rarely does it achieve the balance of Tremors. The pace is brisk, and the adventure scenes – like the survivalist couple moving working their way through their endless collection of guns as they try to kill the monster that’s invaded their basement – are in equal parts exciting and humorous. The actors play it big and comedic without ever losing the humanity of their characters, and the personalities they manage to embody are both funny and endearing.

Kevin Bacon is particularly interesting in this regard. Throughout his career, he has leavened his many roles as sordid characters or villains – it’s worth remembering that his film debut came as the almost-preternaturally annoying Chip Diller in Animal House­ – with the occasional turn as a well-intentioned leading man, as in his breakout hit Footloose. He also, from Friday the 13th through Stir of Echoes or Hollow Man, pops up not infrequently in horror films. His role in Tremors epitomizes a many of the talents that have served him so well in all these areas. The good-natured charisma of his character Val has just a touch of dim-witted desert-rat sleaziness to it, and the film’s horror elements are aided by his ability to project real earnestness into his confrontation with what might otherwise become a too-silly monster.

There’s also a number of cheeky references that keep the film entertaining. Steven Spielberg‘s masterpiece Jaws lurks in the background throughout – the working title of the original Tremors script was Land Sharks, until the popularity of a Saturday Night Live sketch of that name forced a change – and specific elements of that older film pop up again and again here. These include Spielberg’s famous shark-view shots as well as the original design for the VHS cover of the film, which imitates the Jaws poster of the shark rising straight up through the water at an unsuspecting victim.

The film also riffs continually on elements of the ’50s monster movie cycle: at one point the characters talk about where the monsters might come from, throwing around the possibilities that they’re the result of radiation or were produced by the government, before Ward’s character declares confidently (and absurdly) that they come from outer space. Finally, none of this would be possible without the precedent of David Lynch‘s Dune and its sand-tunneling worms, which the monsters here uncannily resemble, from their appearance to their ability to sense vibrations in the ground.

In the end, there’s nothing breathtakingly original or exceptional in Tremors, and a worse version of it would feel simply cobbled together from the elements of older and better movies. But there’s a reason it became a huge video-store success and spawned four sequels, one prequel and a television series. Movies that attempt to be campy and a little scary and entertaining all at the same time are a dime-a-dozen; movies that actually achieve these things are rare, satisfying and influential. In the same way that Tremors wouldn’t exist without Jaws, our current crop of monster movies, from A Quiet Place to Sharknado, wouldn’t exist without Tremors.