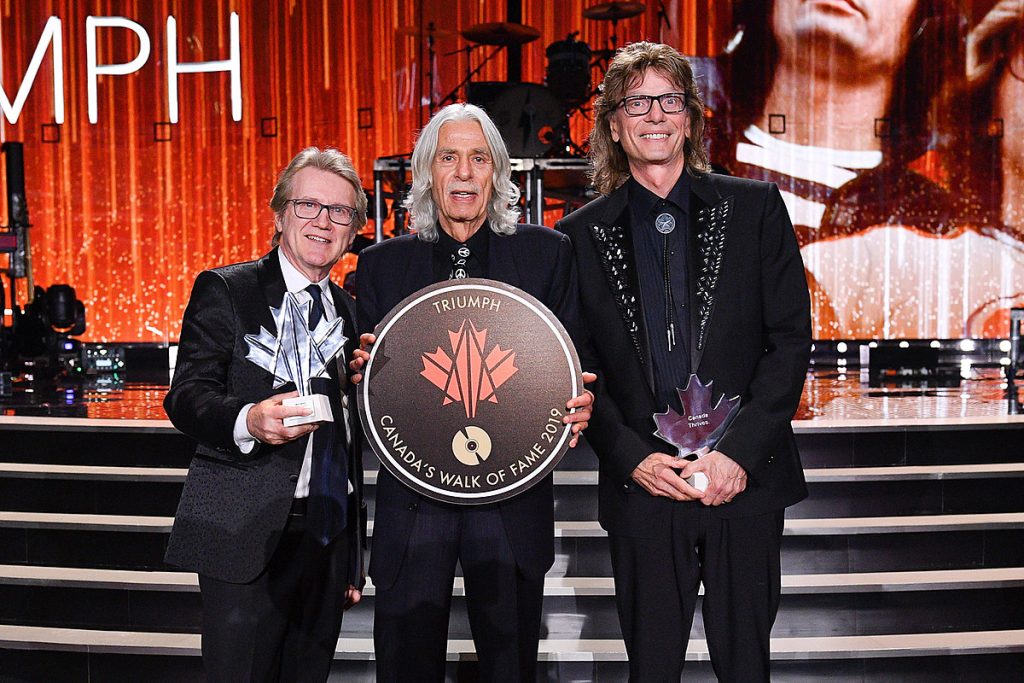 Things have been relatively quiet for Canadian trio Triumph for most of this decade, but the next several months will find them in a more visible place.

As a new documentary, Triumph: Lay It on the Line, nears its release next year, bassist Mike Levine marvels at how far he and his bandmates, guitarist Rik Emmet and drummer Gil Moore, have come in the 45 years since they first began making music together.

“I hope artists today will enjoy the same longevity that we have as a band,” Levine tells UCR. “As difficult as it was when we started out, it’s even more difficult to stand out these days. It took us a couple of records for us to really get on our feet, but artists nowadays aren’t even afforded the opportunity to develop their craft and their career.”

While the possibility of doing a documentary on the group had been discussed among various parties over the past five years, Levine says Banger Films’ involvement in the project helped it finally move forward.

“Films generally take forever to make anyway, from getting the idea turned into a script and then going about finding a good producer and director,” Levine says. “But as far as I’m concerned, it’s been more than worth the wait because, in our opinion, Banger is the gold standard of rock docs. Filmmaking is not in our wheelhouse, so having these guys take charge of the project was more than ideal. They did an incredible amount of research on the group, and even borrowed items from the University of Toronto’s Triumph Productions archive, to which we had donated our tapes, videos, outfits, the whole nine yards.”

One of the most exciting parts of filming the documentary took place just a couple weeks ago, when Levine, Emmet and Moore played a surprise, three-song performance for approximately 300 fans who had gathered to interact with the band, as well as check out some of that memorabilia from the University of Toronto.

“We knew fans were coming in on their own dime to take part in this Q&A with us and to check out the memorabilia as part of the documentary,” Levine explains. “And we thought it would be nice to do something special for them.”

The bassist notes most of the fans in attendance was a mix of Americans and Canadians, but three fans traveled from Brazil, happy to be part of the event without knowing they’d even have a chance to see the group.

“They had never seen the band live before, and as soon as we began playing, they rushed to the barrier, crying and waving their hands,” Levine recalls. “To see that kind of unfiltered reaction from them was just amazing.”

Even though they barely had a chance to break a sweat during the three songs they played recently, Levine insists it’s still thrilling to be making music together. But for all the fun the brief performance was, he doesn’t foresee the band returning to the road.

“After we performed in Sweden in 2008, we actually had a tour planned that was going to take us right across Canada, in addition to between 15 and 18 dates in the U.S.,” he explains. “But then the economy went south and it was going to be too much of a risk to undertake, so the tour got scrapped. Incidentally, I don’t think it would be any easier to mount a tour now, given what everyone has on the go outside of Triumph.”

Triumph also marked another career milestone last month with their induction into Canada’s Walk of Fame, where they joined other native musical luminaries such as Bryan Adams, the Band and producer Bob Ezrin.

“It’s always an honor and nice to be recognized for these things,” Levine says. “I think it shows the evergreen status Triumph has earned in the music community among press and journalists, as well as our fans.”

Also in the works for the group is a double-LP reissue of Classics, which is celebrating its 30th anniversary. The reissue will feature the 11 tracks from the original album in addition to live recordings of “Never Surrender” and “Blinding Light Show/Moon Child.” The set is due for release on Dec. 13.