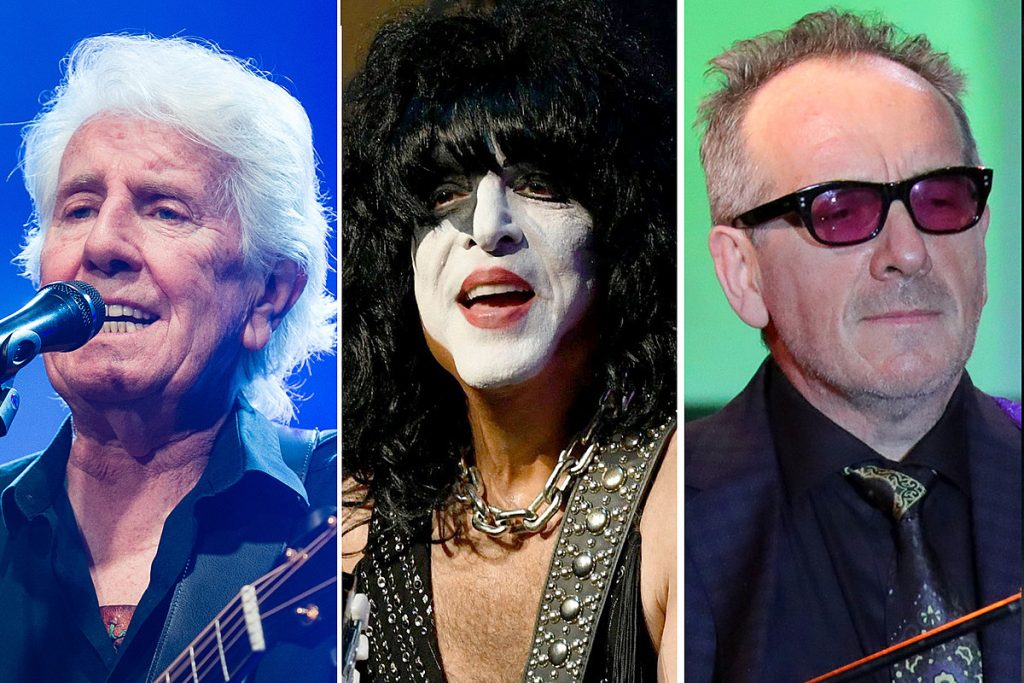 Graham Nash, Paul Stanley and Elvis Costello were among the artists responding to coronavirus lockdown conditions by sharing home-based online shows with fans.

Nash recorded a set for Rolling Stone’s In My Home series, performing three tracks from the Crosby, Stills, Nash and Young album Deja Vu, which was released in March 1970. “I’d like to give a shout out to all the medical people, all the postmen and postwomen – all the people that are risking their lives to make our lives better,” he began. And we need to help them, too…we need to stay home. We need to not spread this virus. Talking about being at home, why don’t I sing ‘Our House’ for you?”

Kiss frontman Stanley reported he’d been self-isolating for as long as 17 days before discussing an old memory. “When I was a kid in my teens I went to a park near my house,” he said from his home. “One day a band set up there, a local band; I never saw them before. … Clearly they wanted to be a Zeppelin type band. The singer had long blond hair; the guitar player obviously wanted to be the great Jimmy Page – who doesn’t?” As they broke into Albert King song “The Hunter,” Stanley thought he heard the line “I really love you, baby,” only to realise the lyric was “I’m a big bad hunter, baby.” He noted that the song also included a reference to “Love Gun,” which put the wheels in motion for the classic Kiss track of the same name.

Costello performed “{What’s So Funny ‘Bout) Peace, Love and Understanding” from his Vancouver home, by way of a contribution to a benefit campaign for the U.K.’s National Health Service. Before entering into a Q&A session using fan messages, he commented: “Pretty much anything you do that adds to the solution rather than adds to the problem is the right thing to do, as you know. You don’t need me to tell you that.”

Meanwhile, David Byrne wrote an article for his Reasons To Be Cheerful website, making the case for the positives that could come after the global emergency. “I ask myself, is there something we can learn from this, something that will prepare us to better weather the next crisis, some different way of being that might make us stronger?” He said in the piece, titled “The World is Changing – So Can We.” He added: “Is this an opportunity to change our thinking, our behavior? How can we even do that? Are we capable of doing that?

“It’s ironic that as the pandemic forces us into our separate corners, it’s also showing us how intricately we are all connected. It’s revealing the many ways that our lives intersect almost without our noticing. And it’s showing us just how tenuous our existence becomes when we try to abandon those connections and distance from one another. Health care, housing, race, inequality, the climate — we’re all in the same leaky boat.”

Robbie Robertson reported that the recent international collaboration on a version of the Band classic “The Weight” had been given a new meaning in the coronavirus period. Featuring Ringo Starr and a number of world musicians, and released last September, it had notched up five million views before a new surge in interest.

“When it came out, there was a really nice response to it, but it’s just grown and grown,” Robertson told Rolling Stone. “In the last week or something, it got a million more views on it. And people are sending me messages from Cambodia. I’m just delighted it’s serving a purpose today. This was an idea that I had to write this song many years ago. And so it’s such a blessing that something like this can make a contribution this many decades later. I couldn’t be happier.”

Kelly Osbourne admitted that her dad, Ozzy Osbourne, had found it incredibly frustrating to be nearly ready to return to action after a year of health woes – only to be faced with the pandemic’s lockdown rules. “Seeing after one treatment of stem cell what has happened and the progress that he’s made is mind-blowing,” Kelly said. “He’s walking better. He’s talking better. His symptoms are lessening. He is building the muscle strength back that he needs after his spine surgery.”