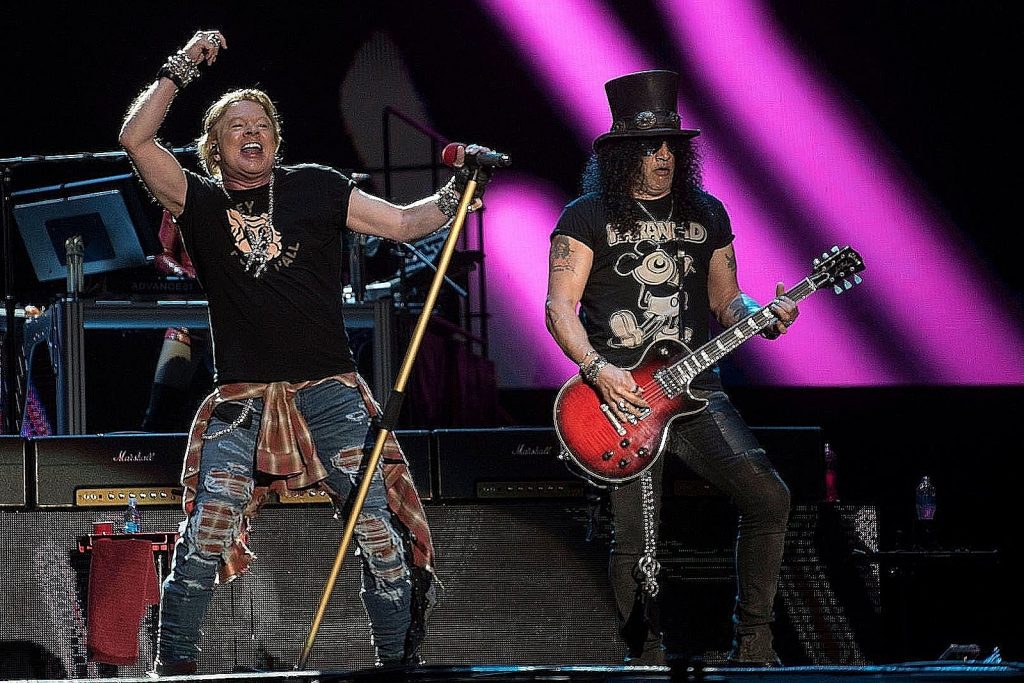 Guns N’ Roses played their new song “Hard Skool” live for the first time during a tour stop at Royal Farms Arena in Baltimore. You can see fan shot footage from the concert below.

“This is something about lower education,” frontman Axl Rose proclaimed before launching into the track for the first time.

The performance of “Hard Skool” follows the live debut and subsequent release of “Absurd,” the first Guns N’ Roses track to feature Axl Rose, Slash and Duff McKagan since their 1994 cover of the Rolling Stones‘ “Sympathy for the Devil.”

Much like “Absurd” — which is a reworked version of the previously unreleased song “Silkworms” — “Hard Skool” dates back to the Chinese Democracy sessions. The latter track arguably has a more “vintage” GN’R sound, boasting swaggering guitar riffs and a catchy chorus that features Rose wailing in his upper register. A snippet of the track was leaked in 2006, and the full song was leaked in 2019 after GNR superfan Rick Dunsford purchased a storage unit full of unreleased digital recordings owned by former A&R executive Tom Zutaut, who signed Guns N’ Roses to Geffen Records.

The band’s management quickly bought the recordings back from Dunsford, but the material still leaked online. Dunsford claims he did not leak the material but said he has still been banned from Guns N’ Roses shows “pretty much for the rest of my life.” GNR ultimately released their updated studio version of “Hard Skool” earlier this week.

Prior to its live debut, several videos of Guns N’ Roses sound-checking “Hard Skool” surfaced online, most recently before the band’s Aug. 16 show in Chicago.

While “Hard Skool” and “Absurd” can both be streamed now, they will also receive physical distribution. Guns N’ Roses announced the tracks will be part of their upcoming CD, vinyl and cassette releases. Though fans are undoubtedly happy to have any material from the band, there is still no word on a new full-length album. In April 2020, Duff McKagan‘s wife, Susan Holmes McKagan, said that Guns N’ Roses had been “working fastidiously on some killer new stuff.” A few months earlier Slash also said, “Stuff is happening [with new music], but there are no specifics.”

Listen to the Studio Version of ‘Hard Skool’