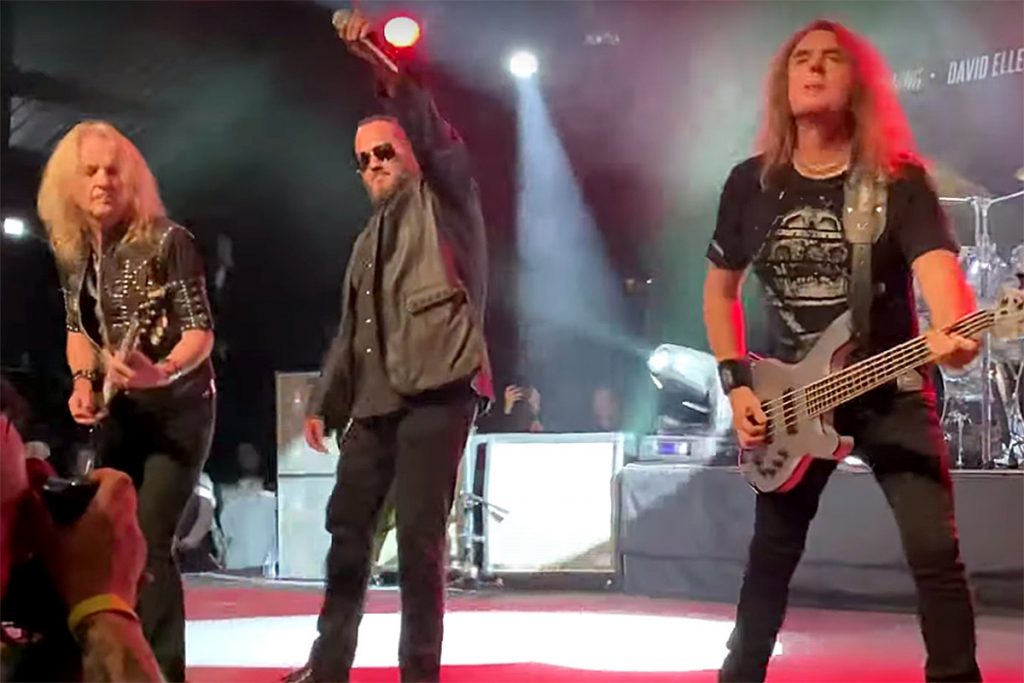 The 14-song set opened with “Riding on the Wind” and featured “Metal Gods,” “Hell Bent for Leather,” “Living After Midnight” before ending with “Take on the World” and Breaking the Law,” sung by Ellefson’s singer Thom Hazaert.

You can see videos and the full set list below.

Watch K.K. Downing, David Ellefson and Others Perform ‘Riding on the Wind’

The show, at K.K.’s Steel Mill venue in Wolverhampton, served as the opening night of Ellefson’s European tour with his solo band in support of their recent album Sleeping Giants, as well as the release of his recent memoir.

“I am very pleased to have been asked to perform a unique and special concert with Megadeth’s David Ellefson to celebrate the release of his new book, More Life With Deth,” Downing had said when the event was announced.

“The concert will also bring about the opportunity to play again with some very dear and talented metal legends from the past,” Downing added. “The combination of these icons will for sure enable us to deliver up one of the most exciting concerts this year, so much so that it would not be out of place to call this the ultimate ass-kicking ‘MegaPriest’ fest and is one that is not to be missed.”

K.K. Downing and David Ellefson ‘MegaPriest,’ Steel Mill, Wolverhampton, 11/3/19
1. Riding on the Wind
2. The Green Manalishi (With The Two-Pronged Clown)
3. Hell Is Home
4. Running Wild
5. Beyond the Realms of Death
6. Exciter
7. Metal Gods
8. Burn in Hell
9. Before the Dawn
10. Between the Hammer and the Anvil
11. Hell Bent for Leather
12. Living after Midnight
Encore:
13. Take on the World (with Thom Hazaert)
14. Breaking the Law (with Thom Hazaert)