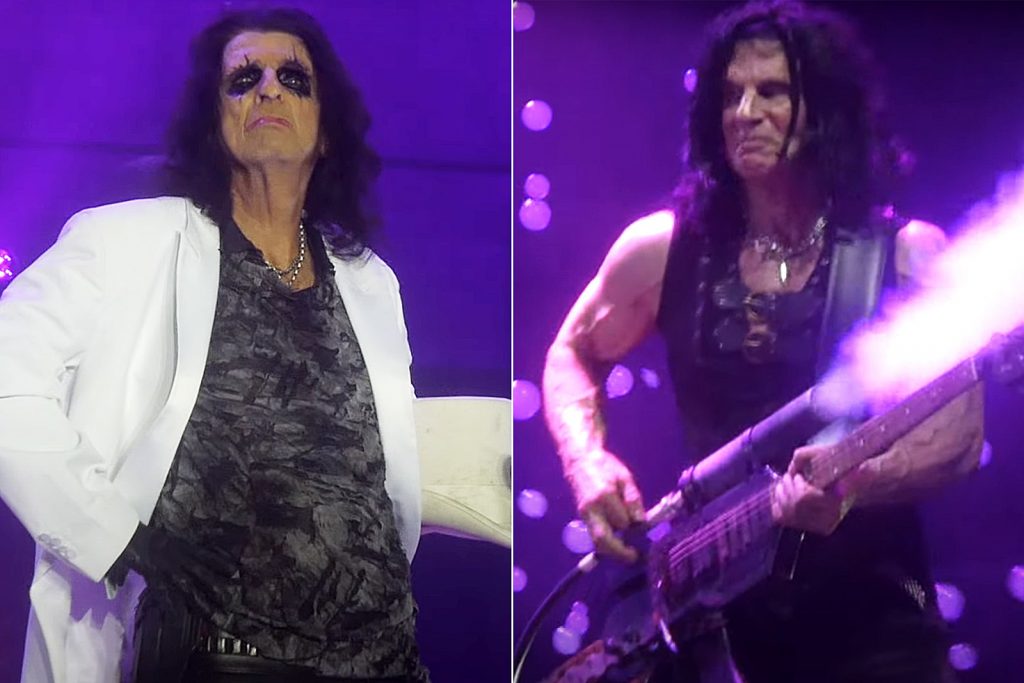 Alice Cooper kicked off his fall U.S. tour on Wednesday at the Wind Creek Event Center in Bethlehem, Pa., marking his first show with guitarist Kane Roberts since 1988.

You can watch video from the performance and see the full set list below.

The 23-song set featured three tracks from Roberts’ first stint with the shock-rock icon – “Teenage Frankenstein” and “He’s Back (The Man Behind the Mask)” from 1986’s Constrictor and “Roses on White Lace” from 1987’s Raise Your Fist and Yell – although they’ve been regular features on the set list on recent road trips.

Roberts returned with his trademark machine gun guitar, only it spat smoke rather than fire this time around. Introducing the band at the end of the show, Cooper said: “The beast is back – Kane Roberts!” As they took their bows, Cooper put his top hat on the guitarist’s head, only it fell off. Once the band leader had left the stage, Roberts’ colleagues made him take one extra bow.

With his Rambo-like physique, signature machine gun guitar and songwriting chops, Roberts played a pivotal role in Cooper’s late-’80s metallic era. He played in the shock-rocker’s band from 1985 to 1988 and co-wrote nearly every song on Constrictor and Raise Your Fist and Yell.

The reappointed Roberts replaces Nita Strauss, who joined Cooper’s touring band in 2014. Strauss announced in July that she would not be joining Cooper on his fall tour and revealed a few days later that she had joined Demi Lovato‘s touring band; Cooper concurrently announced Roberts’ return. Strauss insisted, however, that her exit from Cooper’s band wasn’t necessarily permanent, and she could see herself playing with him next year if their schedules align.

“There’s no shutting of a door and changing of the guard, it’s just I’m taking a step back a little bit,” Strauss told Louder. “Depending on what the schedule looks like next year, I may have the chance to come back, I may not. But it definitely doesn’t feel as final to me and to the people in Alice’s band and the inner circle as it has been portrayed out in the world.”

Roberts is also keeping an open mind regarding the possibility of extending his time with Cooper. “Well, I do want to record and sing with him. … Right now, it’s five weeks … there’s a sort of a semblance of perfection in that, right? It has a beginning and an end to it,” he told Vinyl Writer Music. “But if it evolves past that, there will be reasons why it should, and if it doesn’t then there will be reasons why it shouldn’t.”