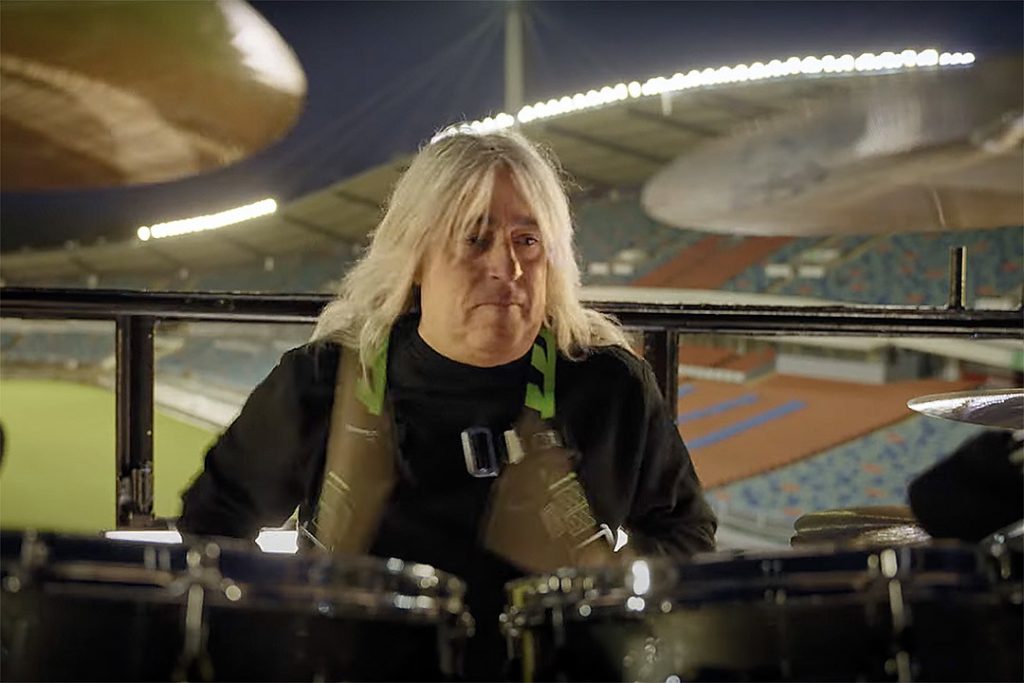 Motorhead and Scorpions drummer Mikkey Dee is seen playing a midair solo in a commercial for a new line of Volvo trucks.

Dee – who owns a license to operate heavy-goods vehicles – performed what Volvo called “the possibly highest-ever drum solo” in one ad, while also appearing in two other clips. In one, he shows driver development manager Tatu Ljokkoi his 1981 paperwork before taking the wheel of an FH model vehicle. In the other, he demonstrates the level of control the FMX model offers by trying to nudge the truck against a bass guitar without knocking it over.

“The electric driveline contains fewer moving components and the responsiveness from pressing the accelerator to powering the wheels is immediate and precise,” Volvo said. “This makes maneuvering in tight and challenging spots easy and controllable, even for an unexperienced driver. Heavy metal drummer Mikkey Dee … is known for his intense double-pedal technique. Has he got what it takes to precision drive a 32-tonne Volvo FMX Electric truck down a steep slope? Take a look at this video to find out.”

You can watch the commercials below.

Dee joined Scorpions in 2016 following the death of Motorhead leader Lemmy Kilmister the previous year, after having spent several months as the German band’s stand-in drummer. “These guys are so nice, and we’ve known each other for many, many years,” he said at the time. “And it’s a great honor to carry the Scorpions flag here.” Two years later, guitarist Rudolf Schenker explained the band’s decision to add a cover of Motorhead’s “Overkill” to its set. “We always were very friendly to each other,” he noted. “He was pure rock ‘n’ roll, he was living his life. … It’s great to really give Lemmy, up in heaven, a little hello and rock ‘n’ roll for heaven.”

A look at the late Motorhead frontman over the years.