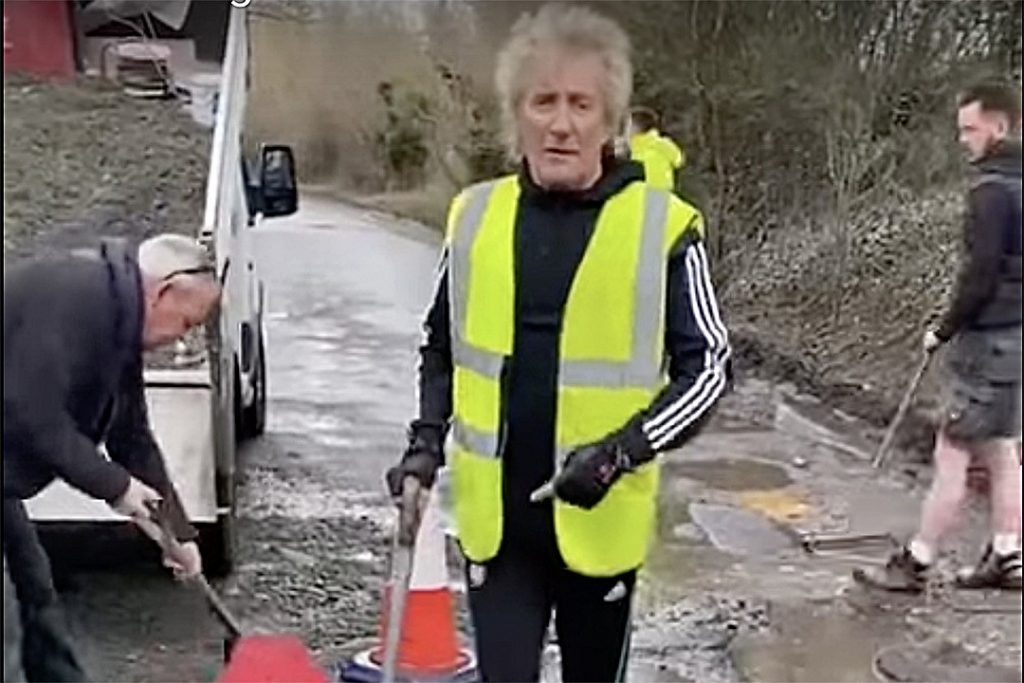 Rod Stewart released a video that showed him grabbing a shovel and helping repair a road riddled with potholes, saying he’d been spurred into action because his sports car couldn’t be driven over the severely damaged surface.

The singer was dressed in the training gear of his beloved Scottish soccer club, Celtic, as he was seen among a group of men working on a stretch of roadway while complaining that local authorities had ignored the issue while huge amounts of money were being invested in a nearby motorway.

“This is the road near where I live in Harlow, and it’s been like this for ages,” Stewart explained in the clip (see below). “And the other day there was an ambulance with a burst tire. My Ferrari can’t go through here at all. So me and the boys thought we’d come and do it ourselves. So this is what we’re doing, filling in the holes, while millions and millions of pounds have been spent on the M11.” He added: “I’m repairing the street where I live because no one can bother to do it!”

Stewart’s action received generally positive responses from locals, many of whom expressed similar anger over the situation. Last year the leader of Harlow Council, Mark Ingall, launched legal action against the senior Essex Country Council in a bid to force improvements on the area’s roads.

“When I received the email from Essex saying the potholes were not going to be fixed, I took legal advice from ‘Mr. Pothole,’ who has recently secured repairs to roads in Northamptonshire by taking… legal action,” Ingall explained to local press. “Essex … underspent on road maintenance by £1 million last year; they have no excuse not to meet their legal responsibility to maintain our roads.”

Rod Stewart Working on the Road