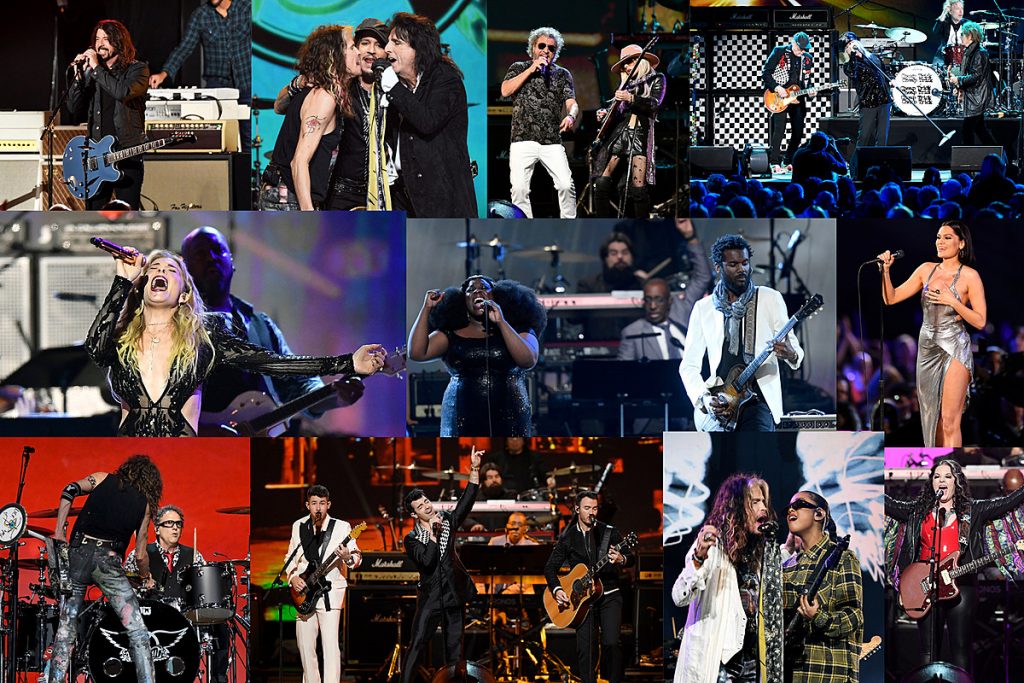 Sammy Hagar, Alice Cooper, Cheap Trick, Foo Fighters were among the artists who paid tribute to Aerosmith at the MusiCares Person of the Year gala last night (Jan. 24), playing some of the band’s classic songs.

You can see dozens of photos and audience-shot footage from the event below.

The all-star ceremony, staged at the Los Angeles Convention Center, featured a four-song set from the band of honor. Playing without their (musically) estranged drummer Joey Kramer, Aerosmith opened with “Big Ten Inch Record” and one of their signature cuts, “Sweet Emotion.”

After bringing out R&B singer H.E.R. for an rousing “Dream On,” Aerosmith recruited Cooper and Johnny Depp (guitarist Joe Perry‘s bandmates in Hollywood Vampires) for “Train Kept a Rollin’.” Depp added rhythm guitar on the track, and Cooper alternated between backing vocals and harmonica.

Hagar collaborated with guitarist Orianthi on a ripping version of “Back in the Saddle,” full of raspy vocal yelps and tremolo bar squeals. Foo Fighters played a revved-up “Toys in the Attic” and ventured into the mid-’80s with “Let the Music Do the Talking,” with frontman Dave Grohl ferociously barking the vocal. Cheap Trick, who toured with Aerosmith in 2012, blazed through “Rats in the Cellar” with the zeal of a teenage garage band.

Aerosmith’s Kramer has not performed with the band in six months due to an injury. The group recently required him to audition to prove he could play at “an appropriate level,” and they determined he was too rusty to perform at either MusiCares or Sunday’s Grammy Awards. He then filed a lawsuit in an effort to be reinstated before the events, but a judge ruled against the drummer.

Though he didn’t perform with the band at MusiCares, he did appear onstage with them to accept the award and give a speech. While introducing the band members during the show, Tyler reportedly called out, “Joey Kramer, where are you? We love you, man!”