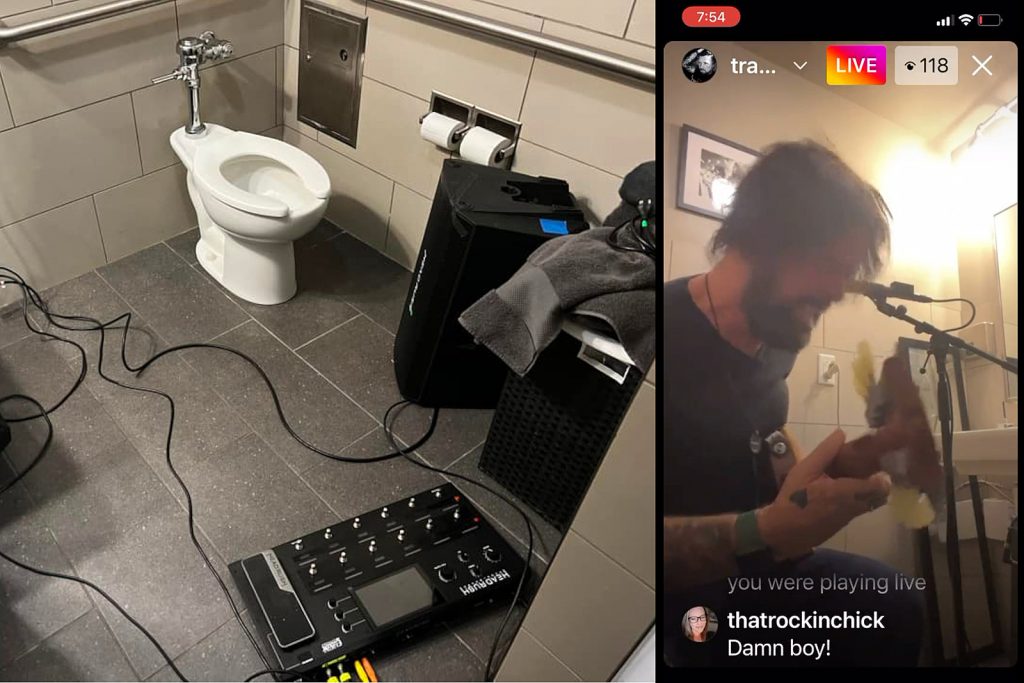 “So we have a unique situation,” the guitarist explained in a post to social media. “A lot of people know I have a panic disorder. While I have it 95 percent under control, heat is the remaining trigger and I simply cannot play in the heat. BUT!!! We have found a solution for todays show I will be playing in a comfy bathroom directly behind the stage where there is air conditioning.”

Guns and his team ran cables to the nearby bathroom, and set audio equipment up in the makeshift space so he could listen and perform with his bandmates onstage. The guitarist even streamed his performance on Instagram Live for fans who wanted to watch him play.

Impressively, the setup seemed to work, with the venue’s in-house video screen also showing Guns’ performance (you can see some of the footage below).

The idea for the bathroom setup came from L.A. Guns bassist, Johnny Martin.

“Tracii wasn’t gonna play the show at all. Because his anxiety is still pretty prevalent,” Martin explained in an Instagram comment. “He said to me (earlier today) that he wasn’t going to do the show, because the heat was just too unbearable to his condition. And that we’ll just have Ace [Von Johnson] cover his parts. So, basically, us play as a four piece.”

“I proposed that we find an air conditioned spot near the stage. And … VOILA! … Here we are. Much better than him opting out, all together. I’M A F**KING GENIUS!”

L.A. Guns are in the midst of a nationwide tour alongside Tom Keifer Band and Faster Pussycat.