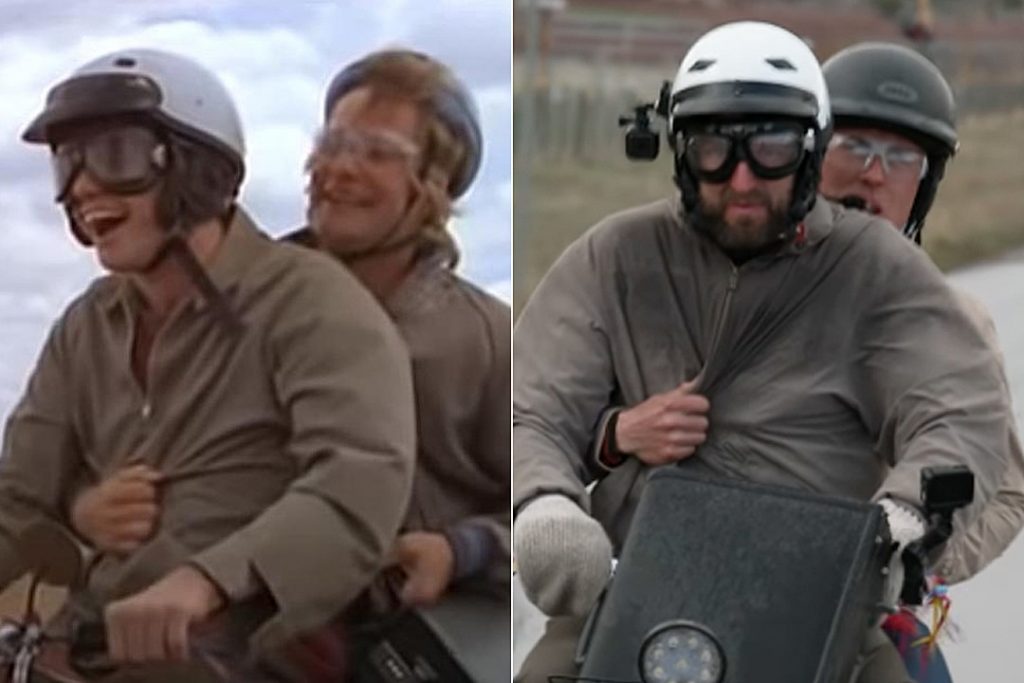 Two men have successfully completed the Nebraska to Aspen mini bike road trip from Dumb and Dumber – and yes, one of them wound up with wet pants.

Ari Henning and Zack Courts from RevZilla’s motorcycle blog Common Tread custom built a mini bike just like the one Jim Carrey’s Lloyd Christmas and Jeff Daniels’ Harry Dunne used in the hit 1994 movie. Then they drove it 400 miles across the Nebraska plains and over the Rocky Mountains, a trip that took three days and required numerous roadside repairs.

You can watch a half-hour documentary of their journey below, and read Courts’ behind the scenes account of their adventure on RevZilla.com.

The duo knew that riding the tiny six horsepower bike with five inch wheels and a complete lack of suspension wouldn’t be comfortable. “If things went well, we would be in Aspen in a few days,” Henning notes before the start of the trip. “If things went really well, the hog would break down and we would end this awful experiment quickly.”

Although they attempted to time the trip so they would encounter the most favorable weather possible, Courts and Henning arrived during an unseasonable cold snap in Nebraska, and spent much of the trip shivering. However, in an admirable commitment to replicating Dunne’s plight in the movie, Henning never donned gloves.

A last-minute rainstorm combined with the absence of fenders left Courts with wet pants upon their arrival in Aspen, reminiscent of the famous Dumb and Dumber scene where Harry urinates on Lloyd during the coldest part of their fictional road trip.

“I just couldn’t wait,” Courts joked while displaying his soaked jeans after his real-life adventure was over.

“The rider triangle is more accommodating than it looks, thanks to Ari stretching the frame to match the movie bike,” Courts notes in his blog post. “The seat, on the other hand, is worse than it looks and the paint-shaker vibration rattled our joints to numbness. Ari had predicted that the novelty of the bike and the journey would wear off after about 15 minutes on the road, but I’m not sure it lasted even that long.”

“It was a dumb trip,” he admits at the end of the video. “But if you’ve always wondered if it could be done, we’re telling you there’s a chance.”