What if You Had to Cut 18 Minutes From Metallica’s Black Album? 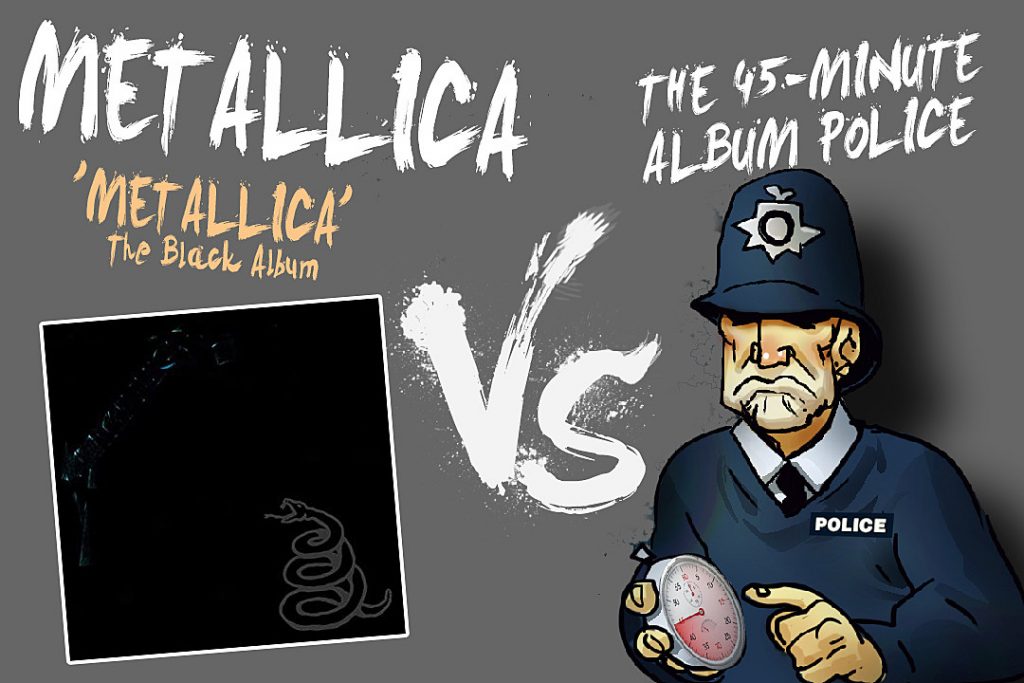 Would Metallica‘s Black Album have been better if it was shorter?

It’s hard to imagine that it could have been more successful: 1991’s Metallica has long reigned as the most popular metal album of all time, with sales of more than 16 million copies worldwide.

But there are fans of earlier Metallica masterpieces such as Kill ‘Em All and Master of Puppets who felt the band oversimplified its sound too much in order to achieve those numbers. And at nearly 63 minutes, the Black Album goes far past the 45 minutes of music that could properly fit on a vinyl record back before the advent of cassettes and compact discs.

So we called in four members of the 45-Minute Album Police who have previously cut Def Leppard‘s Hysteria, the Beatles‘ White Album and U2‘s Rattle and Hum down to size, and asked them which songs they’d trim to get the Black Album down to “proper” album size.

Here’s what they said.

Michael Gallucci: When it comes to the Black Album’s hour-plus running time, it’s tempting to call Metallica’s fifth record a product of its time. After all, plenty of artists were taking advantage of the compact disc’s 80-minute limit to give fans as much music as possible back then. But the fact is, Metallica have always made long albums, going all the way back to their first, 1983’s Kill ‘Em All, which clocked in at 51 minutes. Up to that point, Metallica never made an LP that fit into a user-friendly 45 minutes (the closest they got was 1984’s Ride the Lightning, which runs 47 minutes).

So, while their 1991 commercial breakthrough is long, it’s not needlessly long, at least by Metallica’s standards. Still, that doesn’t mean it couldn’t benefit from a few trims. At 62 minutes and a dozen songs, the Black Album may be the band’s most focused record, but my edit makes it an even tighter listen. I’ve excised some of the least popular and forgettable tracks, leaving Metallica with eight songs running a little less than 45 minutes. I left the five singles – “Enter Sandman,” “The Unforgiven,” “Nothing Else Matters,” “Wherever I May Roam” and “Sad but True,” each an album anchor in its own way – and also included “Don’t Tread on Me” (the snake image from the famous motto flag carries over to the LP cover, so this seems like a natural fit), the brooding “The God That Failed” and “The Struggle Within,” a fitting album closer on both the original version and my edit.

Gary Graff: This was not easy. At all. Metallica really is a fat-free album that, even at 62 minutes, whirls by like a fast-moving cyclone. So this exercise really does hammer home just how well it’s put together, which makes winnowing it down a true struggle within, if you will. The essential tracks are obvious. They were, for the most part, released as singles and have become staples in Metallica’s live repertoire – and deserve to be, even if you’ve heard them so many times by this point that they feel almost pedestrian. But they’re still incredible. It’s outside of those lines that things get tougher, but I’ll argue that any of the five eliminated from the running list cover terrain, sonically and lyrically, that’s well-handled by the songs that remain.

The hardest cut was probably “Don’t Tread on Me,” if only because it provides context for the serpent on the album cover. It’s also tough, taut and efficient, but so is “Through the Never,” which is more dynamically interesting. But this 45 minutes’ worth of Metallica will still satisfy.

Matthew Wilkening: You can count me among the old-school purists who thought the band was losing steam on ... And Justice for All, and I wasn’t entirely thrilled with the simpler, less thrash-y direction Metallica took on the Black Album. “Enter Sandman” was and remains amazing, and “Sad but True” might be one of the best songs the group ever wrote. But the staggering popularity of sluggishly paced, overly dramatic singles such as “The Unforgiven,” “Wherever I May Roam” and particularly “Nothing Else Matters” has always confused me. It would have been great to hear some of the Black Album’s dynamic experimentation and more full-bodied production combined with more of the fast-paced, complicated music Metallica have always done best – and that’s a formula they have successfully explored on recent albums like 2008’s Death Magnetic and 2016’s Hardwired … to Self-Destruct.

Still, those singles I just criticized have better hooks than almost anything on the second half of the album, so it’s the jingoistic “Don’t Tread on Me” and three of the album’s last four songs that get cut to get the Black Album under 45 minutes.

Matt Wardlaw: As outlined by writer Ben Apatoff in a new book, the arrival of Metallica’s self-titled album was an event that almost as soon as the midnight sales were over began to create splinters of division within their fan base. Metallica either made their greatest album to date or had sold out with a new radio-friendly sound, depending on whom you spoke to. All I can tell you as someone who enjoyed both Metallica and listening to the radio, this album sounded good to my ears in 1991. It was a bold new direction but one that was really intriguing to hear.

Sonically, it was their best- (or worst-, depending on your album stance) sounding record that they had made to date. The songs sounded huge – and I loved the sinister energy of the material. One wonders that if you were to make the album more heavy (stripping away a few of the radio singles that we now know as classic Metallica songs in the process), would the hardcore fans have been more forgiving? Here’s my vision of what that might have looked like. P.S. “Wherever I May Roam” was a tough cut, but it’s too long for what we’re doing here.

Bryan Rolli: The Black Album is too long. You know it, I know it and Metallica knew it, which is why they tacked its three worst tracks onto the end. In stark contrast to the muscular, hook-filled arena-metal anthems preceding them, “The God That Failed” and “My Friend of Misery” are interminable mid-tempo slogs, while “The Struggle Within” is a by-numbers thrasher full of pedestrian, down-picked riffs and James Hetfield’s best self-parodying howls.

Thankfully, this drop-off in quality also makes it easy to trim the fat off the Black Album. Nix the last three songs and say goodbye to “Don’t Tread on Me,” another mid-tempo clunker whose lyrics read as embarrassingly jingoistic nowadays. Hetfield can claim an apolitical stance till he’s blue in the face, but it doesn’t take a rocket scientist to see how easy it is to interpret a song named after the Gadsden flag in bad faith. You’re left with a lean, mean, eight-song LP that stacks up pound-for-pound against any album from Metallica’s bygone thrash days — though it still wouldn’t do much to pacify those old-school fans. I’ve altered the sequencing to make the record a bit more symmetrical, and for good measure, I’ve closed it with “Through the Never,” a tough-as-nails thrash number that proves the newly matured Metallica hadn’t lost their edge.