When Aerosmith’s Self-Titled Debut Arrived With a Whimper 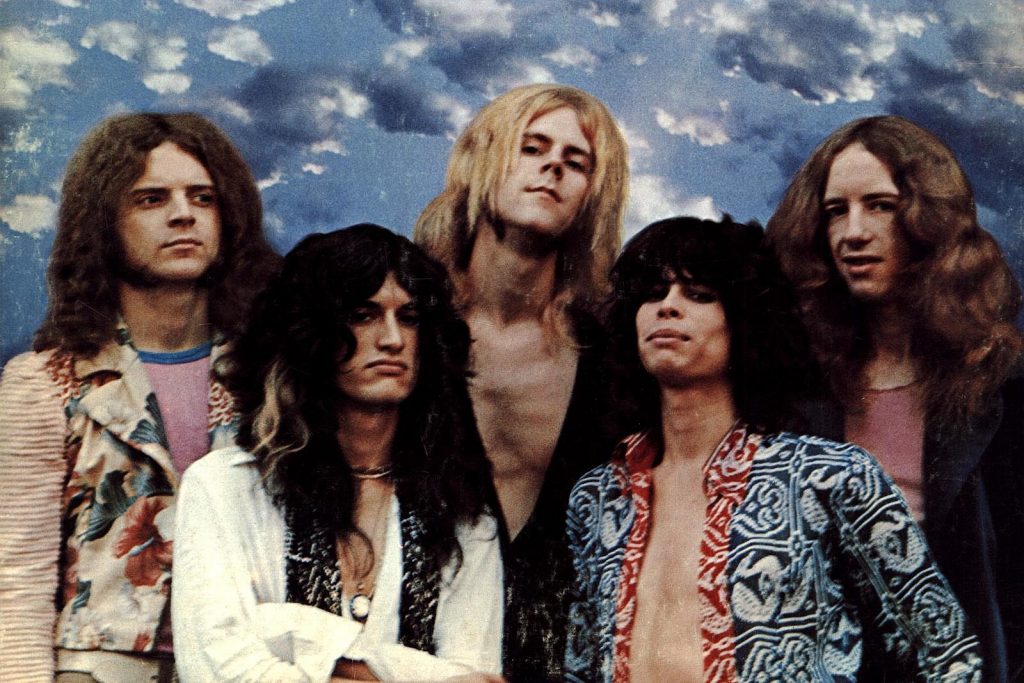 By the mid-’70s, Aerosmith was one of the biggest, baddest, most legendarily depraved rock bands on the planet, selling out stadiums, devouring drugs by the pound and engaging in unspeakable sexual escapades. But that trajectory was hardly apparent from the sound of the band’s modest self-titled debut, which arrived with a whimper on Jan. 5, 1973.

Aerosmith had formed a few years earlier after Steven Tyler‘s band Chain Reaction and Joe Perry and Tom Hamilton‘s Jam Band shared a bill and the musicians hit it off. They fleshed out the lineup with drummer Joey Kramer and guitarist Ray Tabano (soon to be replaced by Brad Whitford) and began gigging in late 1970. The quintet shacked up in a Boston apartment at 1325 Commonwealth Ave. and began writing songs together, signing to Columbia Records in 1972 after impressing label boss Clive Davis at the legendary New York club Max’s Kansas City.

The band headed to Boston’s Intermedia Sound studio in late 1972 to record its debut album with producer Adrian Barber, who had previously worked with the likes of Cream and the Allman Brothers Band. Despite knowing their bluesy bar-band boogie backward and forward, they struggled to capture the energy and spontaneity of their live set on record.

“We were uptight, afraid to make mistakes,” Perry recalled in 1997’s Walk This Way: The Autobiography of Aerosmith. “No one was hounding us. It was pressure from within ourselves, so much pressure that the record came out sounding thin and sterile. We were total novices with no idea what to go for. … I didn’t even know or give a shit about songwriting. So we just went in there, pushed the knobs up and said, ‘Go for it.’ Then the red light came on and we froze up like fuckin’ Eskimos. It was a big drag.”

One of the biggest differences between Aerosmith’s debut and their successive albums was Tyler’s voice. The singer was still developing his libidinous alley-cat screech — which later earned him the Demon of Screamin’ nickname — and he contorted his voice in an attempt to emulate the Black blues and R&B singers on whom he had been raised.

“Yes, I changed my voice when we did the final vocals,” Tyler said in Walk This Way. “I didn’t like my voice, the way it sounded. I was insecure, but nobody told me not to do it. I thought I didn’t sound right on tape. To me, it sounded like a neutered or castrato voice and I wanted to sound a little bit Black because I was from Yonkers, and back then, James Brown and Sly Stone were the only ones saying anything in music, so I put that shit on. I got a lot of shit for it, too.”

Listen to Aerosmith’s ‘Dream On’

Despite the band’s nerves and naivete, there was no denying their musical chops or creative potential, particularly the burgeoning songwriting partnership between Tyler and Perry. Album opener “Make It” is a riff-driven statement of purpose, luring listeners to the rock ‘n’ roll circus with its bold opening lyric, “Good evening, people, welcome to the show.” “Mama Kin” is another infectious riff-rocker, with a sweaty saxophone solo betraying the band’s R&B affinities. (Guns N’ Roses, Aerosmith’s spiritual successors, famously covered the song on 1988’s GN’R Lies.) The slow-burning “Movin’ Out” — the first-ever Tyler-Perry co-write, born on the guitarist’s water bed — shows their early knack for dynamic, evocative storytelling.

Then there’s “Dream On,” the centerpiece of the album and the band’s magnum opus. Tyler wrote the yearning ballad on an upright piano as a teenager, and it’s the only song on Aerosmith to feature his natural singing voice and trademark scream. “Dream On” became a regional hit upon its initial release and was reissued in 1975 following the breakthrough success of Toys in the Attic, peaking at No. 6 on the Billboard Hot 100 in early 1976.

“I’ve always said it’s about hunger, desire, ambition — a song to give to myself,” Tyler recalled in his 2011 memoir Does the Noise in My Head Bother You? “Something about it was nostalgic and familiar, as if it’d been written by someone else years before (but if no one has, then you know you’re into something), or perhaps like I had written it years later and was looking back on all the things that have happened to me over the last four decades.”

Although fans would retroactively discover the gems on Aerosmith and push it to double-platinum status, the LP was dead on arrival upon its initial release. Columbia was far more invested in Bruce Springsteen, another new signee who released his debut album, Greetings from Asbury Park, N.J., on the same day. The label couldn’t even be bothered to proofread, and early pressings of Aerosmith misspelled the last song, a cover of Rufus Thomas’ “Walkin’ the Dog,” as “Walkin’ the Dig.”

“If the release of a record is the birth of a band, ours was a stillbirth,” Perry lamented in his 2014 memoir Rocks: My Life In and Out of Aerosmith. “We kept running to the newsstand to pick up Rolling Stone and read a review. But Rolling Stone never ran one. It’s one thing to have your debut criticized; it’s even worse to have your debut ignored. We were pissed.”

It wasn’t all bad news, though. Aerosmith hit the road with a vengeance in support of their debut, bringing their music to the masses as they had done for years. Their next album, 1974’s Get Your Wings, would give them their first gold record, and they’d be well on their way to world domination. Aerosmith was movin’ out and movin’ up.