When Clapton, Page, May and Jeff Beck Awkwardly Met the Queen 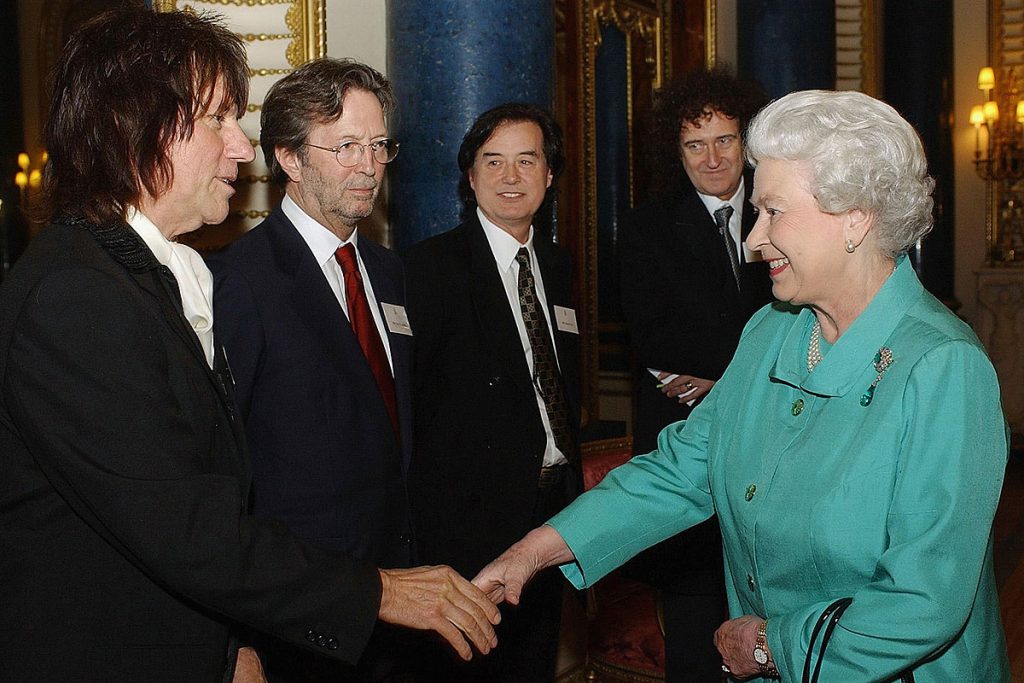 They’re four pioneers of their instrument, but by 2005, guitar legends Eric Clapton, Jimmy Page, Jeff Beck and Brian May still hadn’t made a fan of Queen Elizabeth II.

On March 1 of that year, the 78-year-old monarch revealed her lack of rock knowledge during a Buckingham Palace event honoring the British music industry. The suit-clad guitar quartet were on-hand for the day-long affair, and awkwardness ensued at a reception when they lined up to greet the Queen.

In a video documenting that infamous meeting, the Queen approaches the musicians as an assistant singles out May as a “guitarist who [she] might recognize.” And she does — sort of: Three years prior, Queen (the band) participated in Queen (the person)’s the Golden Jubilee party, playing a version of “God Save the Queen” alongside the house orchestra, with May positioned on the roof.

“Very pleased to meet you,” May tells the royal figure, apologizing for making so much “noise” at that 2002 concert. “It was you on the roof,” she half-asks, as a nervous-looking Page smiles to her left, awaiting his turn. “Are you also a — ?” Elizabeth asks the Led Zeppelin leader, and Page fills in the blanks. “I’m a guitarist as well, yes. Mm-hmm,” he says. May, with the gentle charm of a parent introducing a shy child to a new playmate, tries to prevent any potential dead air. “Jimmy’s a hero of mine,” he says. “Led Zeppelin was…a model.”

Clapton, having observed two fumbling introductions, gets straight to the point: “Eric Clapton,” he volunteers, not waiting for the Queen to make the first move. She then scoots over and shakes Beck’s hand before moving back to the Cream giant. “You’ve all been playing quite a long time,” she half-asks, and Clapton fires back, “About…god, 40 years!” Pointing to Beck and Page, he references their shared history in the Yardbirds, noting, “We all moved through the same band.”

Though the hilarious interaction sparked some headlines at the time, Clapton deflected any criticism of the Queen’s musical knowledge. “It’s great to meet her, and it doesn’t matter at all that she did not know who were are or what we do,” he told the Associated Press. “I wouldn’t expect her to.”