When Damn Yankees Took a Final Stand With ‘Don’t Tread’ 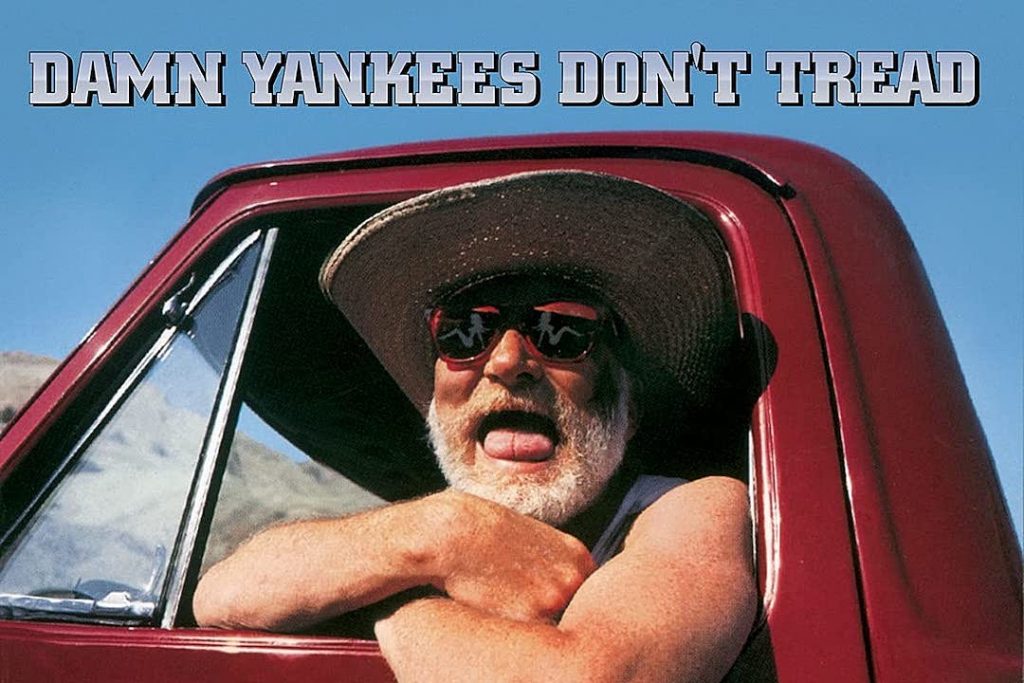 Damn Yankees had come of age very quickly, which applied some momentum as the unlikely supergroup headed into its second album.

The self-titled 1990 debut effort by the consortium of Tommy Shaw (then ex-Styx), Jack Blades (then ex-Night Ranger) and Ted Nugent reached No. 13 on the Billboard 200, went double platinum and launched the Top 5 power ballad “High Enough” and the No. 1 mainstream rock hit “Coming of Age.”

Brokered by record company executive John Kalodner, it may have seemed like an odd combination of commercial melodic rockers and the Motor City Madman, but it worked. By the time Damn Yankees ran its course, fans were ready for the group to “come again,” as the song said.

They did. After touring to promote their self-titled LP, Damn Yankees hunkered down to make a sophomore effort. Teaming once more with producer Ron Nevison and drummer Michael Cartellone, Damn Yankees recorded 1992’s Don’t Tread at the Record Plant in Los Angeles — with some discernible goals in mind.

“We knew each other better,” Shaw explained to this reporter shortly before Don’t Tread‘s release. “We had an identity as a band. It felt a little different writing songs together this time than it did before we knew what Damn Yankees was.”

In response, Nugent said: “I raised a big, greasy, toxic red flag and said, ‘Hey, goddammit, I played some sexy fuckin’ rhythm guitar parts! If they’re not on there, I’m gonna gut you with a rusty spoon!’ And Jack and Tommy went, ‘Y’know, he’s right.’ And Michael said, ‘Yeah, I’m glad somebody fuckin’ said something ’cause there’s no vibrancy to the blend of the music.’ And I think we got it this time. I’m confident that we did.”

Though the Shaw-Blades vocal harmony blend continued to define the sound, there was no question that Don’t Tread kicked a little harder than its predecessor as the band stomped through tracks such as “Fifteen Minutes of Fame,” “This Side of Hell,” “Double Coyote,” “Firefly,” the Nugent-sung “Uprising” and the dynamically shifting “Miser Please.” Robbie Buchanan once again sweetened the onslaught with his keyboards, while the Tower of Power horn section gave “Dirty Dog” a little bit of brassy funk. “Don’t Tread on Me,” meanwhile, was used as one of the U.S. team’s theme songs during the 1992 Summer Olympic Games in Barcelona.

No label, however, was going to let another Damn Yankees album come out without a successor to “High Enough.” That came in the form of “Where You Goin’ Now,” which gave the band its second Top 40 hit. The power ballad peaked at No. 20 on the Billboard Hot 100 (and No. 6 on Mainstream Rock) and was the highest-charting single from the album. Don’t Tread also yielded two more Top 10 Mainstream Rock singles, “Don’t Tread On Me” and “Mister Please,” but its peak at No. 22 on the Billboard 200 was well below Damn Yankees, and with the rock community’s attention turned towards grunge, it only eked out gold sales.

It was also the last album-length statement from Damn Yankees. The group contributed another power ballad, “The Silence is Broken,” to the 1993 action film Nowhere to Run but became dormant shortly thereafter. Shaw and Blades returned to Styx and Night Ranger, respectively, in the mid-’90s, though they also recorded a pair of solo albums as Shaw Blades. Nugent resumed his solo career, and Cartellone went on to play with Nugent, John Fogerty and, since 1999, with Lynyrd Skynyrd.

Damn Yankees did reunite for a pair of one-off occasions: Alice Cooper‘s Christmas Pudding 2004 benefit concert in Phoenix and the 2010 NAMM Convention in Anaheim, Calif. None of the members have called the group finished, though any resumption would come as a great surprise.

“It gets talked about every once in awhile, but nothing concrete,” Shaw said a few years ago. “We’re all so busy with our own things, and for Jack and I that involves other people, so it’s hard to put those down for a minute and go back to [Damn Yankees]. But I’ve learned to never say never about anything in this business, so … maybe.”

You Think You Know Damn Yankees?