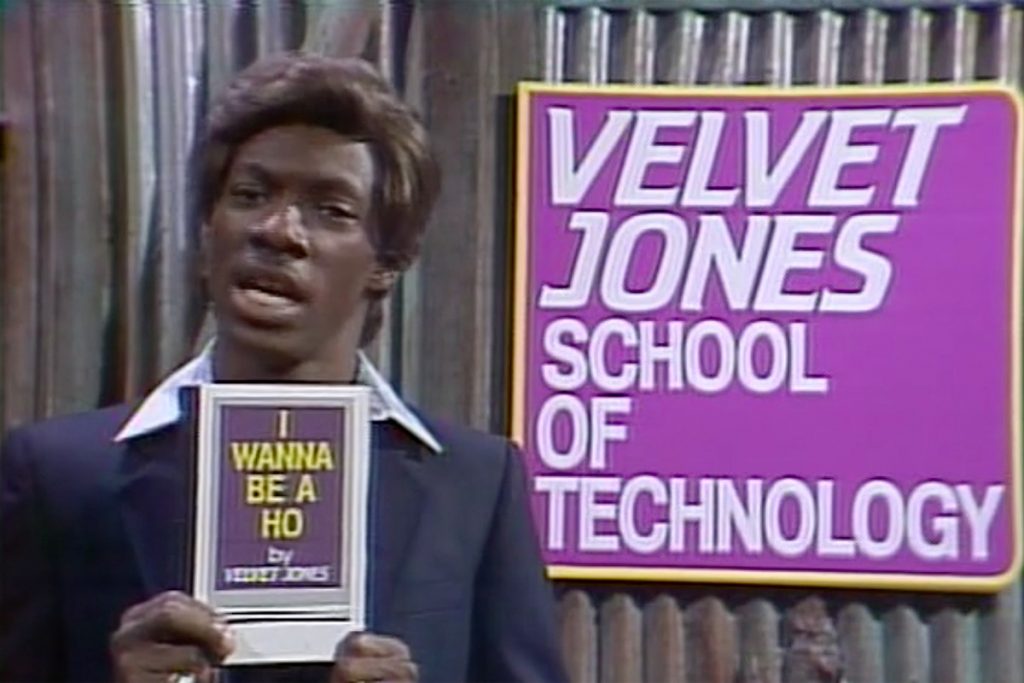 The laughter from Eddie Murphy‘s first portrayal of Buckwheat on Saturday Night Live had barely subsided when he premiered another of his most popular characters. A week later, on the show’s Oct. 17, 1981 episode, Murphy introduced audiences to Velvet Jones, a pimp selling his secrets to success.

Wearing a pompadour wig and standing in front of a sign for the “Velvet Jones School of Technology,” Murphy started Velvet’s pitch: “Hello. Are you a female high-school dropout between the ages of 16 and 25? Are you tired of doors being slammed in your face when you apply for a job? Are you tired of lying around in bed all day with nothing to do? Well, you never need get up again, because in six short weeks, I can train you to be a high-payin’ ho.”

Promising a weekly take of up to $1,500 a week “without even leaving the comforts of your own bedroom,” Jones said the path to riches could be found in his book, I Wanna Be a Ho. He even had testimony from a woman (played by Robin Duke) who said benefits included “you get to meet new people, travel, wear nice clothes, make money and have lots and lots of sex.”

A month later, Velvet Jones appeared again, offering his services to help out male dropouts: “Do you like flashy coats, big cars and like kicking women in the butt? If so, stop doing all these things for free, ’cause thanks to me, Velvet Jones, you, too, in six short weeks can be taught to be a high-payin’ pimp.” This new how-to manual offered tips on making $250,000 annually. “Because it’s off the books,” Velvet noted, “you can still get your welfare check.”

Jones’ third slot, in January 1982, was a parody of The People’s Court, where a woman named Paulette Clooney (Duke again) was suing him for the cost of I Wanna Be a Ho on the grounds she was unable to make money off it. Jones successfully argued his case on the grounds that she wasn’t attractive enough to make a living as a prostitute.

Writing for Slate in 2015, Duke revealed that she, Murphy and Margaret Oberman created Velvet Jones, and that the pimp’s showdown with Clooney was her idea. “If I had a memory,” she said, “I would say that I spent a memorable evening with Eddie and Barry Blaustein and David Sheffield, his main writers, working on that one. I am sure there were some good laughs had in that office that night.”

Duke, who was hired as a writer and cast member toward the end of SNL‘s sixth season, added, “Who wouldn’t want to write for Eddie, if only to hear his distinctive laugh? If Eddie laughed at something I wrote or said, I knew it was funny. He wasn’t a fake laugher. And, of course, at Saturday Night Live in the early 1980s, if I wrote a sketch for him, it would have a much better chance at getting on the air.”

Murphy played Velvet Jones on only two more occasions, selling his romance novels in one and a fitness video (The Exercises of Love) in the other.