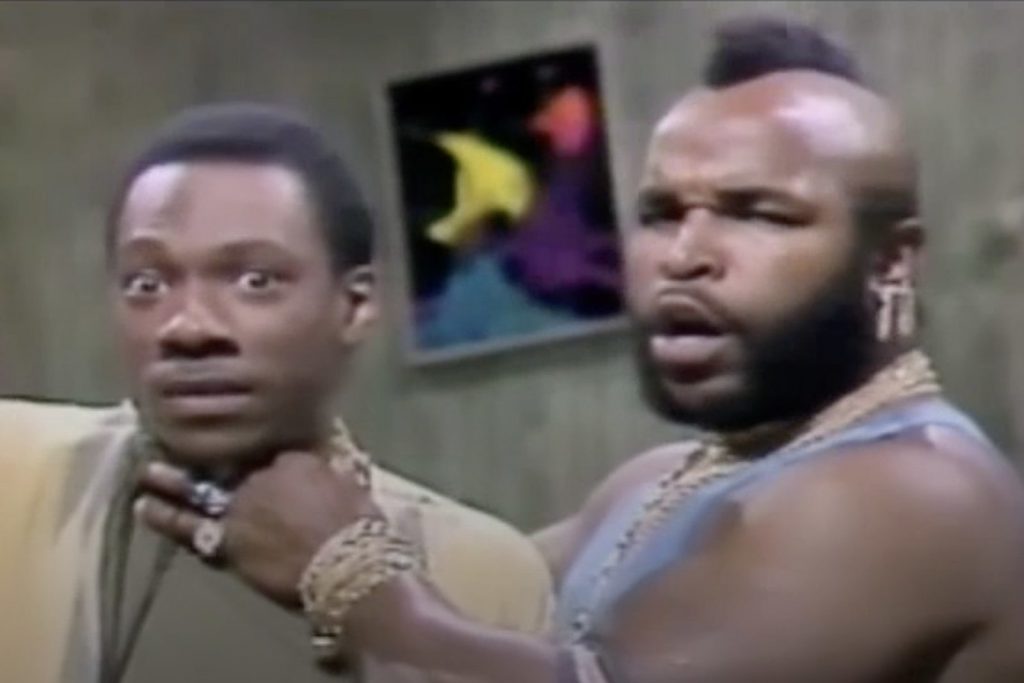 Eddie Murphy was ensconced as the biggest star on Saturday Night Live when one of the comedian’s most popular recurring characters met his match.

Only 19 when initially hired as a featured player, Murphy had initially languished under ill-fated previous SNL producer Jean Doumanian in the long-running sketch show’s disastrous sixth season. In time, however, he broke through thanks to a number of smash-hit roles, an unshakeable confidence and undeniable charisma.

He got there by dipping back into the reruns of his youth for characters like the now-grown and basically incomprehensible Buckwheat from the Little Rascals, his Yiddish-accented approximation of rubbery claymation staple Gumby and the title figure from Mister Robinson’s Neighborhood, a decidedly more streetwise and unscrupulous inner-city version of beloved children’s-show legend Fred Rogers.

Rogers was as soft-spoken and gentle in real life as he was on the long-running Mister Rogers’ Neighborhood, but eventually took umbrage at Murphy’s characterization of Mister Robinson as an opportunistic sneak-thief and all-around grinning scoundrel – complete with cuss words, no less. Rogers ended up visiting 30 Rockefeller Center to complain.

Murphy was actually a fan of the real-life Mister Rogers, and greeted the stern but understanding Rogers with a worshipful hug and a delighted “The real Mister Rogers!” They eventually posed for a smiling photo. Rogers was never pleased with Murphy’s disreputable impression, as revealed in the documentary Won’t You Be My Neighbor, but in this instance he was willing to let the matter drop. (On the other hand, an otherwise-amiable Rogers would later pursue legal action against Ice Cube and against the KKK.)

Mister Robinson’s Neighborhood quickly became a hit with audiences, if not Fred Rogers himself. The joke was as much about the struggles of being poor and Black in America as about the actual Rogers himself, and that was enough to sustain what could have been seen as an especially unflattering portrayal of the TV legend – as well as a racial stereotype. So, Murphy inevitably returned to the character the weekend after Rogers’ visit, suiting up in the yellow cardigan on Oct. 2, 1982 for an episode hosted by Louis Gossett Jr.

Entering to the well-primed applause of an eager crowd, Murphy’s Robinson sings his own version of the welcoming Mister Rogers’ Neighborhood theme song, substituting tales of breaking and entering and swindling a rich women of her money, and donning a pair of golden platform shoes. Calling them his “glitter shoes,” Robinson assures the kids that it’s music day in the neighborhood, walking over to what he terms the “Soul Train scramble board,” on which are stuck letters spelling, “SCUMI.”

He goes on to explain that his large drum kit (complete with bass drum reading “Smokey”) was a recent addition to the show, thanks to Motown legend Smokey Robinson leaving his van unlocked behind the Apollo Theater. (“I ripped him off,” Robinson pronounces cheerfully.) Mister Robinson then sits down to play a boisterous, cymbals-heavy rendition of Survivor’s “Eye of the Tiger.” If Murphy wasn’t necessarily a natural drummer, he’s certainly enthusiastic – enthusiastic enough to elicit a phone call from next door.

Murphy does his signature switch from Mister Robinson’s singsong, child-soothing vocal delivery to a deeply threatening, “Who is it?!” The caller’s identity isn’t immediately revealed, though viewers of 1982’s Rocky III may have guessed from the gravelly, no-nonsense voice loudly complaining on the other end of the line. Mister Robinson’s Neighborhood is his domain, so Murphy simply goes back to the drums.

The neighbor then begins pummeling on his door, but that only results in a smug smile as Robinson assures viewers that he’s installed an impregnable new lock. Sadly for the usually triumphant (or at least quickly escaping) Robinson, his new neighbor turns out to be none other than a cameoing Mr. T – the bouncer-turned-actor whose tough-guy demeanor and catchphrases were all but ubiquitous at the time.

Punching his way through the flimsy door and catching the unsuspecting Robinson around the throat, Mr. T turns to the camera to address Robinson’s audience: “Hello, boys and girls,” he growls, as Robinson’s eyes bulge in fear and oxygen deprivation. “The new word for today is pain.” Ordering Robinson to “sing the song” and close the show, Mr. T keeps his grip as the terrified-looking Robinson can only squeak out a promise that he’ll see the kids tomorrow.

Murphy only portrayed Mister Robinson five more times before exiting in 1984 after the ninth season of Saturday Night Live. He wouldn’t return to the bit for some 35 years, following a long show boycott that reportedly began when Murphy took offense at cast member David Spade mocking him on “Weekend Update” in 1995. (The day-after phone call to Spade was no doubt less gently reprimanding than Rogers’ had been.) Murphy’s belated SNL reunion in 2019 included turns as Gumby, Buckwheat, fellow recurring character Velvet Jones and, of course, Robinson.

If Mister Rogers couldn’t stop Murphy, then what chance did Mister T have?

15 Guests Who Were Banned From ‘Saturday Night Live’