When Eric Clapton Began Backing Away From the ’80s on ‘August’ 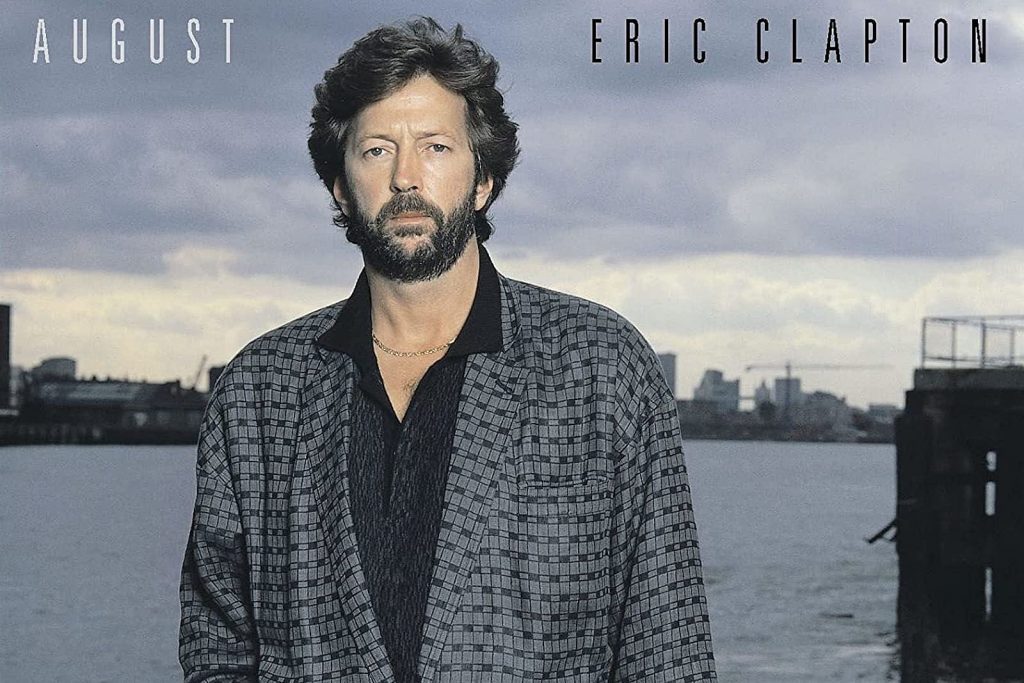 Released on Nov. 24, 1986, the album tried to have to both ways, combining glossy Collins-led R&B-pop with a whisper of the down-home grit of Dowd-produced recordings like 1970’s Layla and Other Assorted Love Songs and 1974’s 461 Ocean Boulevard. It didn’t succeed, mostly because Clapton himself seemed to have his feet in separate worlds, but he sold a lot of records anyway.

He wanted to pay tribute, as he had on 1976’s No Reason to Cry, to the Band‘s sweeping influence on his career – principally because Richard Manuel had recently died by suicide. Clapton also wanted to celebrate the birth of son Conor, whose August birthday gave the LP its name. He wanted to sort through the shards of his broken marriage to Pattie Boyd, with whom he did not have his son. But he also wanted to play the Hollywood game, leading off with a song specifically written for a new Martin Scorsese film.

That tended to give the album a transitional feel, as if Clapton was trying to talk himself out of the sleek, market-tested missteps of 1985’s Collins-helmed Behind the Sun – to say nothing of that Michelob commercial – with every RPM. August wouldn’t let him.

Maybe the worst mistake was taking on “Bad Influence” from up-and-coming blues phenom Robert Cray, since it revealed in high relief just how far Clapton had drifted from his own roots. He seemed more comfortable with two tracks composed by Lamont Dozier, who co-wrote some of Motown’s greatest songs, but they’re among the most egregiously Collins-esque moments. Clapton was already bristling at those who linked them too closely.

“At the end of the day, people will say that Behind the Sun and August are really Phil Collins records,” Clapton told Rolling Stone in 1988. “Fine, if that’s all they can hear, they’re not listening properly. I’m in there with as much as I got.”

The Band’s debut album once convinced Clapton to abandon Cream for something smaller scale, so Manuel’s 1986 death hit Clapton predictably hard. “I was madly in love with Richard,” Clapton later lamented. “For me, Richard was the true light of the Band. There was something of the holy madman about Richard. He was raw. When he sang in that high falsetto, the hair on my neck would stand on end. Not many people can do that.”

Band leader Robbie Robertson, who co-wrote The Color of Money soundtrack song “It’s in the Way That You Use It,” seemed particularly pleased to collaborate with Clapton. “He was such a kind, lovely guy, and I admired him musically,” Robertson told Rolling Stone in 2020. “I thought he was so gifted.” They’d later work together on Robertson’s 2011 album How to Become Clairvoyant, which featured three songs written or co-written by Clapton.

But “It’s in the Way That You Use It” is so overcompressed that it becomes flat and featureless; “Holy Mother,” which is dedicated to Manuel, is sung with great emotion – but dragged down by its mannered, ‘80s-specific production miscues. Worse, Clapton’s solo is mixed so far down that it’s as if he’s playing on the other side of a levee. That’s quite literally the opposite of the Band’s legacy.

Listen to Eric Clapton’s ‘Miss You’

The only notable sparks, and they are dim indeed, are found when Clapton gets real. “Tearing Us Apart,” a duet with Tina Turner, was reportedly written about a group of Boyd’s friends (derisively dubbed the “the committee”) whom Clapton blamed for dividing the pair. “Miss You,” a pretty good blues song in need of a complete remix, seems to address their impending divorce, too.

The story of the album-closing “Behind the Mask” is far more interesting than the song itself, which is marred by an instantly dated synth figure. Recorded at the suggestion of keyboardist Greg Phillinganes, the song somehow became the only Top 20 U.K. hit from August – but only after being cast aside during the Thriller sessions by Michael Jackson, who also had Phillinganes in his band.

Phillinganes did his own update of the Yellow Magic Orchestra song for a solo album, setting an unfortunate template for the August version. Jackson’s dance-y take didn’t see the light of day until the 2010 posthumous album Michael. It suited him far better than it ever did Eric Clapton.

Still, August matched Clapton’s highest-ever chart position in the U.K., sharing the No. 3 spot with 461 Ocean Boulevard. But it went only gold in the U.S., and Clapton switched producers before 1989’s Journeyman, a return to form. His most notable subsequent collaboration with Collins was adding lead guitar to the No. 3 power ballad “I Wish It Would Rain Down,” from the Genesis frontman’s 1989 solo album … But Seriously.