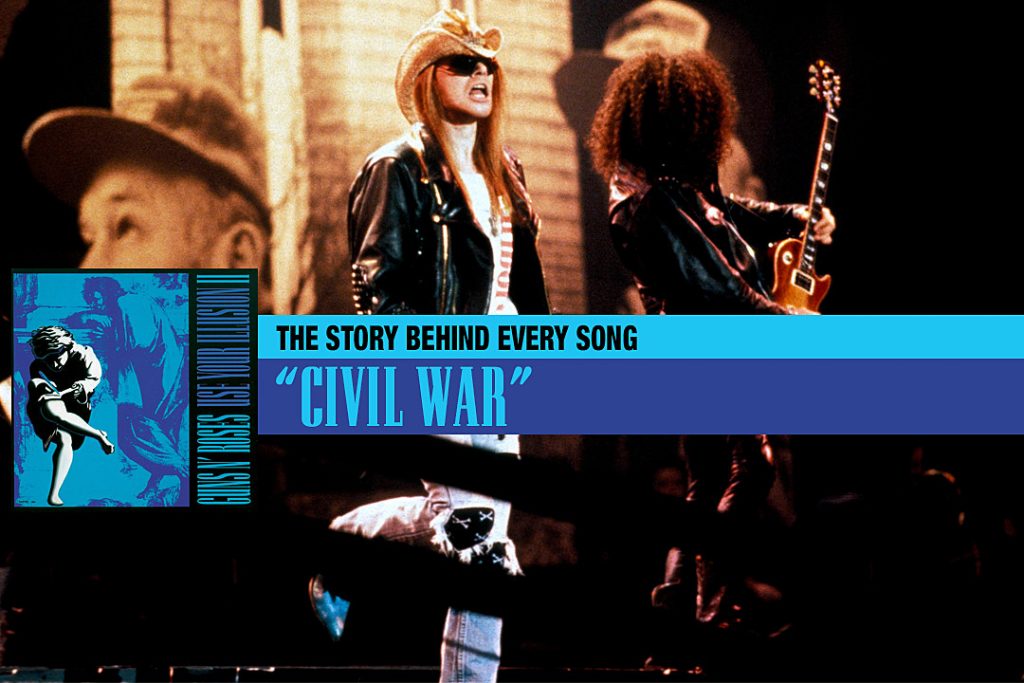 If any other band presented a nearly eight-minute song that quoted speeches from Cool Hand Luke and the Peruvian Shining Path, incorporated a whistled bit of a mid-19th century song and made references to John F. Kennedy’s assassination and the Vietnam War, you might raise an eyebrow. Or laugh ’em out of the room.

When it’s Guns N’ Roses, though, nothing seems like much of a surprise. That’s the case with “Civil War,” the lead-off track from Use Your Illusion II and one of the most notorious songs in a canon full of them. It was one of the first glimpses of what GNR were up to following Appetite For Destruction, and it remains an integral part of the band’s live set, with an anti-war message as resonant and relevant now as it was upon its initial 1990 release.

The song itself, written by Axl Rose, guitarist Slash and bassist Duff McKagan, dates back to the Appetite touring cycle. In a 1993 interview, Slash remembered working on it before the group left for Japan and Australia, and continuing to develop it throughout those dates.

“Basically it was a riff that we would do at soundchecks,” McKagan told the Rockline radio show (as transcribed by Appetite for Discussion). “Axl came up with a couple of lines in the beginning. I went in a peace march, when I was a little kid, with my mom – I was like four years old – for Martin Luther King,” and that inspired the lyric: “Did you wear the black arm band when they shot the man who said, ‘Peace could last forever?‘” “It’s just true life experiences, really,” McKagan added.

Elsewhere, “Civil War” is filled with aural Easter eggs. It opens with a sample of Strother Martin’s “What we’ve got here is failure to communicate” speech from Cool Hand Luke, while Rose is whistling a bit of “When Johnny Comes Marching Home,” popularized during the American Civil War. Its last bridge — “We practice selective annihilation / Of mayors and government officials / For example, to create a vacuum / Then we fill that vacuum / As popular war advances, peace is closer” — delivered at lightning speed by Rose, hails from another speech, made circa 1980 by a guerrilla from Peru’s brutal Shining Path party.

The song received an auspicious debut on April 7, 1990 at Farm Aid IV in Indianapolis. Organizers worked hard to put Guns N’ Roses on the bill, since Rose and Izzy Stradlin were home-state heroes — and it was a surprise to some concertgoers since the group accepted late and wasn’t announced in advance. It was the band’s first public band appearance in six months and would be their last with drummer Steven Adler, who fell while sprinting to the riser.

Rose introduced “Civil War” as “something new we got,” and the surprised crowd gave the track an ebullient reception. For Guns N’ Roses’ second song, Rose shocked his bandmates by calling an audible for UK Subs’ “Down on the Farm” — which Adler had never heard before, requiring on-the-spot instructions from McKagan.

Comically, Lyle Lovett followed GNR that day, performing only with an accompanist on cello. “I wanted to maintain the spirit,” he quipped backstage.

“Civil War” was released as a single — the seventh of the Illusion campaign and fourth from Illusion II — on May 3, 1993, peaking at No. 4 on Billboard‘s Mainstream Rock Songs chart. Overseas editions of the single included additional Illusion album tracks, along with a March 1993 interview with Slash.