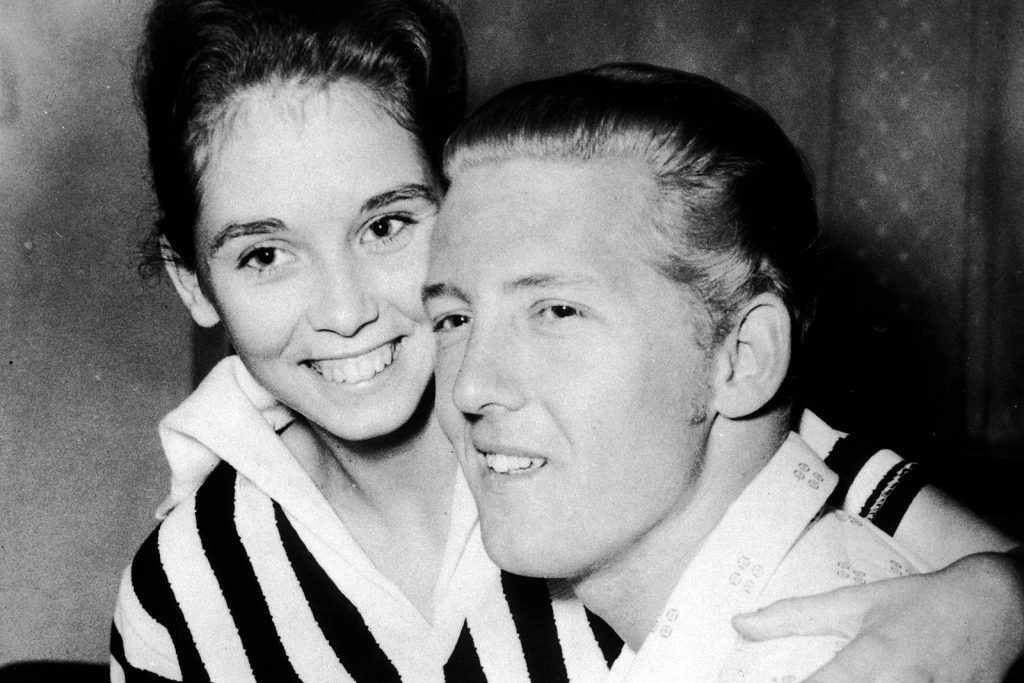 Jerry Lee Lewis had been warned ahead of his British tour in May 1958 that he shouldn’t take his new wife to the U.K., but he didn’t listen.

He couldn’t see any problem with bringing her with him on the road. Lewis was one of the few who saw things so simply. In the eyes of others, there were several issues.

First, Myra Gale Brown had been just 13 years old when they got married on Dec. 12, 1957. Second, she was his cousin, and the daughter of his bassist J.W. Brown. She was also his third wife. And their marriage had taken place before Lewis’ second divorce had been finalized. And that second marriage had also taken place before his previous one was terminated.

Lewis and his entourage arrived at London’s Heathrow Airport as one of the first American stars to make the journey, and many of them expected great things. Elvis Presley had recently joined the Army, so the way was clear for Lewis to claim the rock ’n’ roll crown. All those hopes were smashed when British journalist Ray Berry, who was patrolling the airport, asked a simple question of Myra: “Who are you?”

She replied honestly since she hadn’t been given any advice about how to treat reporters, saying she was the wife of Jerry Lee Lewis. Within days the British tour had been canceled, and within weeks the rising rock star would be appearing for $250 in bars and clubs instead of the $10,000 big shows he’d been playing before the scandal. Radio stations stopped playing his songs, former friends abandoned him and Myra later said she’d never shaken off the “Jerry Lee Lewis’s child bride” prefix to her name.

Lewis would need a decade to rebuild his career. There were a handful of rock ’n’ roll successes, but Lewis didn’t hit his commercial stride again until he became a country artist in 1968. He remained bewildered about what he’d done wrong – though the fact that Myra had originally been said to be 15 rather than 13 suggests someone, somewhere thought there was a problem.

“I plumb married the girl, didn’t I?” Lewis said to one reporter. The newlyweds had moved in with her parents, and surely that was another indicator that everything was above board? They also staged a second marriage ceremony to clear up the divorce doubt. Didn’t that stand for something? And by 1959 wasn’t Presley – who voiced his support for the marriage, as long as the couple was truly in love – dating 14-year-old Priscilla?

The marriage ended in 1970, but the couple remained in contact. (Lewis’ seventh wife was formerly married to Myra’s brother.) They had two children: daughter Phoebe and son Steve, who died at the age of three. Myra, then 70, explained her philosophical approach to what had happened to her In a 2014 interview. “The only problem was that nobody told me anything,” she said. “So when a reporter asked me, ‘Who are you?’ I was the one who let the big ol’ cat out of the bag.

Watch Jerry Lee Lewis Talk to the Media in 1958

Myra confirmed that “all of Jerry’s managers told him, ‘Do not take Myra to England,’ because the British press was known to rip Americans apart – that’s where all the tabloid journalism started. Everyone underestimated me being aware and possibly knowing what to do. I could so easily have said, ‘I’m J.W. Brown’s daughter.’ If anybody had told me anything, I could have prevented this thing.”

She argued that the truth behind the tour cancellation was that the British police told them they couldn’t guarantee the band’s safety due to the passion of their fans, rather than a response to the tabloid headlines. “They said Jerry played to a half-empty house, and they booed and that kind of stuff,” Myra said, “and that was not true.”

Back in 1958, she’d told one reporter that a girl could marry at 10 years of age if she could find a man who’d have her. In the 2014 interview, Myra added that she “couldn’t believe that they could not see that I was a grown woman. I was only 13, but people said I was more mature than Jerry.

“My generation was taught to hide under our desk when the bomb came, so you always had in the back of your mind that any minute, any day, life could come to an end,” she argued. “What I wanted was a baby in my arms, a home, a husband, a kitchen to cook in, a yard to raise roses.”

Myra also revealed that her parents had her younger brother because she’d pleaded so desperately for a baby to look after. She happily took on the role of his second mother.

Lewis enjoyed a further rehabilitation of his reputation in the ‘80s. Inducted into the Rock & Roll Hall of Fame at its inaugural event in 1986, he instigated the end-of-show jam that remains a mainstay of the ceremony to this day. In another twist of fate, the 1989 movie Great Balls of Fire also helped rebuild his name – with a script based on Myra’s book about their lives together.

“Okay, if you say to me now, ‘There’s a 13-year-old girl over here who wants to get married,’ I would say ‘God, please do not do that, little girl. Go to college, get an education, then figure it out,’” Myra said in the 2014 interview. “But it was a different world, things have changed so drastically. Options, mindsets – this world has gone so fast the last 50 years that you can’t keep up with it.”

Their daughter Phoebe was Lewis’ business manager from 2000-12, but the partnership ended in acrimony with lawsuits filed in 2017. Lewis remained resolute about it all.

“I never done anything I’m ashamed of,” Lewis told The Guardian in 2015. “I wasn’t the kind of guy who’d take a girl and put her up on a hill, and live with her for eight years, and then just marry her when I got her pregnant.” The last comment was apparently a dig at Presley: “Sure, he did it,” Lewis added. “It’s well known. I married my girls.”