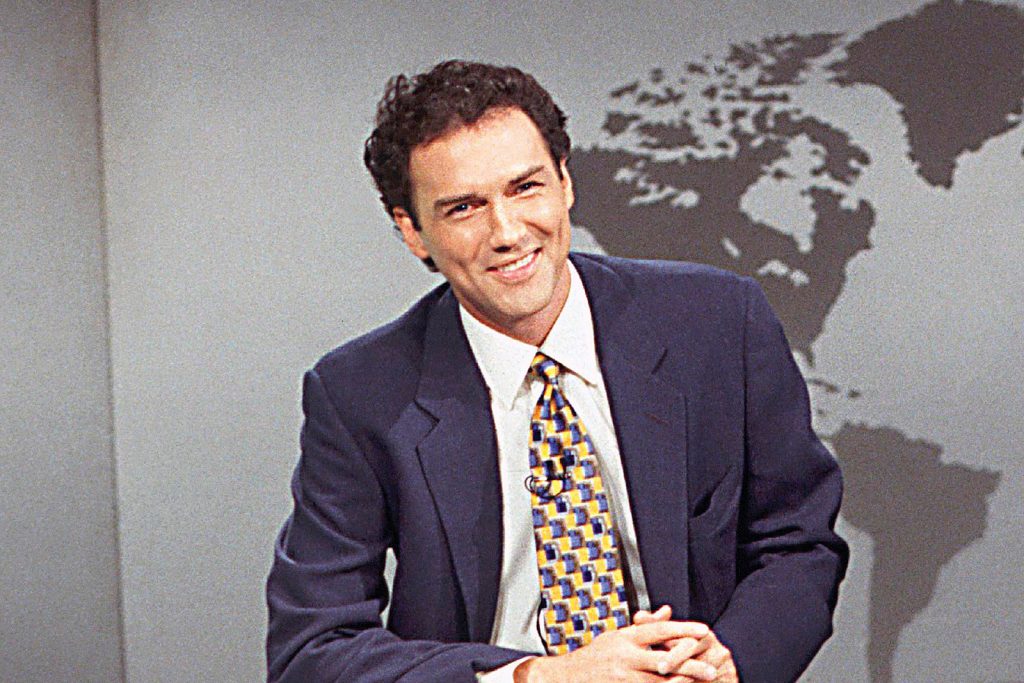 When Norm Macdonald closed out his Dec. 13, 1997, “Weekend Update,” the Saturday Night Live star had no idea he’d never sit at the “Update” desk again. Nobody at Saturday Night Live knew that Macdonald would be fired from his job as SNL’s fake newsreader before the show returned from its holiday hiatus or that Colin Quinn would be installed in Macdonald’s place. Saturday Night Live is all about cast turnover. Still, Macdonald’s three-and-a-half year reign as the deadpan anchor of SNL’s venerable midshow centerpiece took viewers, cast members and even Macdonald completely by surprise.

That “and-a-half” segment of Macdonald’s time as “Weekend Update”’s anchor contains a multitude of backstage and network politicking, complete with unprecedented NBC interference in how SNL was run, producer Lorne Michaels’ desperate battle to maintain control over the late-night comedy show that had become his life’s work and perhaps a little intrigue surrounding Macdonald’s penchant for mocking America’s most infamously acquitted double-murderer, O.J. Simpson, the legendary NFL Hall of Famer whose 1995 acquittal for the murders of his estranged wife and a friend continued to provide the brashly cheeky Macdonald with explosive comic material right up to and including his last show.

Noting that Simpson’s lawyer, Johnnie Cochran, had recently taken the case of NBA star Latrell Sprewell (who’d just been accused of attempting to strangle his coach), Macdonald explains that Cochran is floating a “second choker” theory, referencing Simpson’s never-materializing promise to find “the real killers.” And, more directly, Macdonald later references an incident where the freed Simpson was denied seating at a Los Angeles restaurant, noting that, in recompense, the eatery will now have to provide “murderer” and “non-murderer” sections.

Macdonald, who had a way of punching such jokes with just the right amount of knowingness to make them land even harder, had made a banquet out of O.J. jokes on “Update.” “Well, it’s finally official. Murder is legal in the state of California,” Macdonald famously beamed, kicking off the first “Weekend Update” after Simpson’s trial had concluded, a cathartically explosive zinger right into the heart of an issue that had the entire country wound tight. It was a go-to vein of can’t-miss material for Macdonald over the years, which continued to get huge laughs from seemingly everyone but Don Ohlmeyer, then NBC’s powerful West Coast president and a longtime friend of O.J. Simpson.

James Andrew Miller and Tom Shales’ oral history of the show, Live From New York, goes into this period at length, providing a harrowing glimpse into how NBC — flush with the massive in-house success of Friends — began to apply the same micromanaging approach to all of its programming, including the previously more independent Saturday Night Live of Lorne Michaels. While it’s true that SNL of the mid-’90s was in something of a creative lull, what the authors uncover is a power struggle between a distant and overweening executive and a producer who’d perhaps become a bit detached from the show he’d been running for decades. (Ohlmeyer is quoted as even taking shots at how much time Michaels spent at his preferred vacation retreat of St. Barts as part of the exec’s long-distance sniping campaign.)

Olhmeyer’s influence was strong enough that Michaels conceded to firing fan-favorite cast members Adam Sandler and Chris Farley (two of the most popular proponents of the sort of SNL bro-humor critics were railing against) before their contracts were officially up. But those departures took place after the season, as is the SNL way of easing performers and writers out the door. Macdonald’s firing from “Weekend Update,” along with that of venerable SNL writer and “Update: scribe Jim Downey, happened midseason and took Macdonald so by surprise that he went into the next show week still wondering if he had a job. Macdonald eventually had to phone Ohlmeyer himself to receive the bad news, with the executive puzzled that neither Michaels nor anyone else at SNL had stepped up to definitively explain the situation to their now ex-anchor.

In Live From New York, the O.J. Simpson conspiracy theory is aired out, with various parties expressing some skepticism that Ohlmeyer’s crusade to meddle in Michaels’ domain stemmed specifically from the fact that “Weekend Update” was rarely free from “Of course he did it” jokes. Ohlmeyer, who died in 2017, maintained that he just didn’t find Macdonald or Downey’s take on the news funny and that he felt that a change was necessary, citing internal numbers showing people tuning out during “Weekend Update.”

And there may be some truth to that last point, as Macdonald’s style, while held up as brilliant and original by many (Chevy Chase called Macdonald the best of his “Update” successors), was fashioned to be deliberately alienating. Macdonald holds on for a beat or two too long after a joke that doesn’t land with his audience, his defiant stare-down with viewers more challenging than the crowd-pleasing laugh lines they’re used to. There’s also a complexly layered meta-bit in this last outing where Macdonald subverted his joke about female drivers by flipping the script on the audience not once, but twice, toying with his penchant for perceived misogyny in a technical marvel of joke-telling that, nonetheless, left the in-studio audience more uneasy than rolling with laughter. “I don’t want to say anything that an audience already thinks,” Macdonald stated in Live From New York, adding, “’Update’ was never a big pep rally when I was there. It was never a big party. So I think the network started going, ‘It doesn’t seem like as much fun as it could be.’”

Whatever Ohlmeyer’s motivations were for messing with Saturday Night Live, the writing was on the wall, not just for Macdonald, but for Michaels’ ability to steer the show free from outside interference. There’s an offhandedness to Macdonald’s sign-off on his last “Update,” with the comic already pulling off his lapel mic as he says a casual, “That’s the news, folks. Thanks.” It’s interesting in retrospect that the one correspondent piece that night came from Colin Quinn, playing an eggnog-drunk version of himself and mocking Macdonald’s position as “some antihero” and belittling his “precious little ‘Update’ desk, from whence the oracle will enlighten us.” When Saturday Night Live came back for the Samuel L. Jackson-hosted Jan. 10, 1998, episode, it would be Quinn at the desk, addressing the elephant in the room (after a deep sigh) with an anecdote about your favorite bar changing bartenders, but you still wanting a drink even though new guy Steve doesn’t make things as well as old bartender Jeff. “Well, I’m Steve,” Quinn kicked off his, as it turned out, brief time as the anchor. “What can I get you?”

As for Macdonald, Olhmeyer’s ultimatum to Michaels somehow added insult to injury in that Ohlymeyer still wanted Macdonald to stay on the show — just not doing “Weekend Update.” “I didn’t want to do sketches,” Macdonald explained in Live From New York, noting how he parlayed his “Update” firing into a timely spot on The Late Show With David Letterman where the two comics (both of whom had now been fired by NBC) engaged in some high-profile mockery of Ohlmeyer. “I know Don Ohlymeyer and, just between you and me, he’s an idiot,” stated Letterman, with Macdonald offering little in the way of resistance. (Letterman notably did edit out a reference he made to Ohlymeyer’s drinking habits, although the cut joke was duly reported in the press.)

Macdonald finally got his wish and left Saturday Night Live entirely after the season. The Ohlmeyer campaign against Macdonald wasn’t over, though. After Macdonald’s comedy movie Dirty Work was released later in 1998, Ohlmeyer specifically banned all advertisements for the film from NBC’s airwaves, citing Macdonald’s mockery of the network on Letterman and Howard Stern’s shows as the vindictive reason.

Later, after Macdonald’s death from cancer in 2021, Conan O’Brien revealed that he’d fought an ultimately successful battle to continue to book the comedian and favorite guest on his NBC show — against the mandates of Ohlmeyer. With signature aplomb, Macdonald addressed Ohlmeyer’s ongoing campaign against him by noting that, for a guy who’s “about a thousand times more powerful” than Macdonald, Ohlmeyer “should get a life, man.”