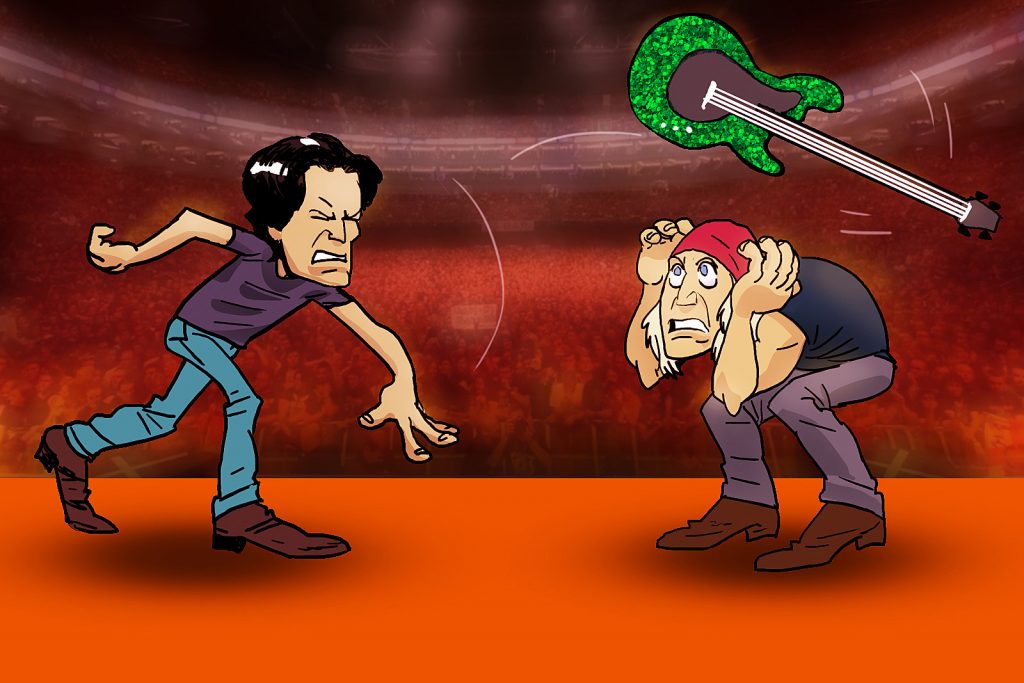 All bands grow old, but not all bands grow up — and the members of Poison proved they still had plenty of youthful rage left in the tank when singer Bret Michaels and bassist Bobby Dall nearly came to blows onstage in Atlanta on Aug. 25, 2006.

The glam-metal survivors had released a compilation titled The Best of Poison: 20 Years of Rock a few months earlier and were celebrating the milestone by playing amphitheaters and arenas across North America. Thousands of fans had gathered at Atlanta’s HiFi Buys Amphitheatre to see the band, and for much of the night, they received a routine, hit-filled performance.

But something was clearly amiss as the band finished set closer “Nothin’ but a Good Time” and retreated from the stage ahead of a “Talk Dirty to Me” encore.

The Metal Sludge website posted accounts of several fans who attended the gig. “Don’t know what started it, but right before the encore, Bret and Bobby appeared to be in a heated discussion, and next thing ya know, Bobby slings his bass at Bret,” one fan said. “[Drummer] Rikki [Rockett] and the roadies had to come in and separate them. Bret then went on to apologize and say how we may have just witnessed the last Poison concert ever.”

“‘[Nothin’] but a Good Time’ was played, the confetti dropped as it has every year, the band comes out and waves and it goes dark,” another fan recalled. “A couple of minutes pass by, and Bobby Dall comes running onstage, [picks] up the mic and starts screaming, ‘Do you want some more? I can’t hear you!’ Then the rest of the band comes walking out looking puzzled, and Bret tried to get the microphone from Bobby. He shoved Bret and looked seriously pissed off.”

The fan said that after the roadies separated the band members, “Bret comes out and apologizes to the fans. He said, ‘That shit has been building up for 20 years.’ He then explained, ‘We are like brothers, and sometimes brothers want to knock the fuck out of each other.'”

The onstage meltdown was not without precedent. Michaels and guitarist C.C. DeVille got into a fistfight backstage at the 1991 MTV Video Music Awards after a disastrous performance that featured DeVille incoherently plucking his way through “Talk Dirty to Me” when the band was supposed to play “Unskinny Bop.” Poison fired DeVille and replaced him with Richie Kotzen shortly thereafter.

Cooler heads prevailed after the Atlanta blowup, and Poison finished their 20 Years of Rock Tour without a hitch. “Nothing good is going to come out of a fight,” Rockett told OC Weekly in 2018. “If we got in a fight now the way we did back when we were 25 years old, we would just never play together [again]. We all know that. We’d go crawl in our corner, and that would be it – we wouldn’t talk to each other, and that would be the end of Poison. We know that’s not a good option.”